A word of advice for India's private airlines 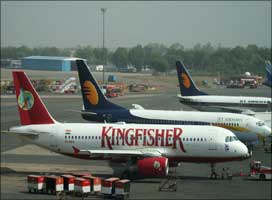 After getting it wrong initially, and offering to fly more Air India flights on the day the private sector airlines threatened a strike, the aviation ministry is now talking tough.

IndiGo has quickly said it will operate its scheduled flights, and others too may see the light. The airline owners, backpedalling furiously because they realise that they have overstepped the line, say now that they did not want to threaten the government or blackmail passengers; all they wanted to do was highlight their problems - high aviation turbine fuel prices and high airport charges.

Two of the eight airlines that held out the strike threat have been making money, IndiGo being one of them and Spicejet the other - and both happen to be low-cost carriers. So it is not clear what they are protesting about.

As for the others, it is not clear if they will make money even if the government concedes their demands. After all, the price of aviation turbine fuel has come down from Rs 71 per litre in Delhi in August last year, to Rs 36 a litre now.

If the airlines are still losing money, the reason must surely lie elsewhere. Given that aviation fuel comprises a third of an airline's costs, the halving of the ATF price should have put the airlines in the black.

It is of course true that ATF costs significantly more in India than it does elsewhere, but that is not a new development and the airlines knew this when they began business. In any case, ATF now costs less than the petrol used by two-wheelers and is comparable to the price of diesel that trucks and public buses use. The government cannot simply ignore the question of relative taxation.

The aviation industry's real problems are the sharp slowdown in traffic and a faulty business model. Jet Airways' sales fell by a fourth in the latest quarter - from Rs 2,830 crore (Rs 28.3 billion) in April-June last year to Rs 2,085 crore (Rs 20.85 billion in April-June this year. If the bulk of the costs are fixed and revenue falls so sharply, losses are inevitable - especially when an airline is a thin-margin business at the best of times.

The simple truth is that airlines like Jet and Kingfisher (and Air India) have expanded to levels that are not warranted by the traffic. Until they downsize, their bottom lines will show red ink. ATF prices and airport charges may be contributing to the problem, but the core issue lies with the airline owners.

Meanwhile, it is interesting that the Federation of Indian Airlines did not discuss the strike issue at its meeting when the Air India chairman was present; he learnt about the strike from the TV networks.

So was the strike threat meant to deter the government from giving Air India too generous a bail-out, which would have strengthened Air India's competitive position vis-a-vis the private airlines? The possibility cannot be discounted, and a somewhat obvious question arises: where is the Competition Commission?