It's time Mr Deora got a new portfolio 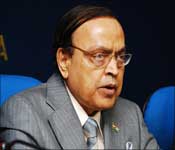 Given the government's affidavit in the Supreme Court and the manner in which the finance and law ministers have rallied around him, it is not surprising that Petroleum Minister Murli Deora has said nothing new in his reply to Anil Ambani's public charge that he was helping Mukesh Ambani's Reliance Industries Limited to renege on its gas deal with Anil Ambani's Reliance Natural Resources Limited.

Even so, the blandness of the response has been noteworthy.

Mr Deora reiterated the old line about public interest being superior to the deal between the two Ambani brothers, but did not even mention that the appeals bench of the Bombay high court had rejected this very argument made by his ministry.

Nor did he respond to the Anil Ambani charge that his ministry's view till not long ago had been what the Bombay high court has ruled - namely, that the government's role in the Krishna-Godavari Basin gas was restricted to getting its share of the profits, nothing else.

As a responsible minister, he should have responded to the charge that RIL's capital costs were too high and resulted in the government's share of the profits being kept to a minimum - even to a lay person, the fact that the four-member committee which approves the costs has two members from RIL appears problematic.

Nor did he explain how RNRL's Dadri power plant can come up unless there is a bankable gas supply agreement between RIL and RNRL first. But neither Mr Deora, nor those writing his speech, thought these issues were material.

The final decision on whether RNRL will get the gas for which it signed a contract with RIL, is something that the Supreme Court will decide. The case has larger implications, as to whether the government has the right to come up with a policy after an event and then apply it retrospectively.

The gas allocation policy that Mr Deora referred to in Parliament, which lays down the priority of allocation of gas, came into being seven years after RIL first signed its Production Sharing Contract with the government.

Since the Bombay high court has ruled the RIL-RNRL agreement conformed to RIL's rights under the PSC, it is the gas allocation policy which is the cornerstone of the government's new appeal.

While the Supreme Court takes its decision, the government needs to take some corrective action. Changing Mr Deora's portfolio is the obvious first step. It is an open secret that Mr Deora is a close personal friend of Mukesh Ambani, so there is an obvious issue of conflict of interest.

While the RIL-RNRL deal was a copy of the RIL-NTPC deal, the petroleum ministry's counsel in the Bombay high court said the RIL-NTPC deal was not a final one - this caused a furore since NTPC is in court, asking RIL to supply gas under its deal with the latter.

While this statement was withdrawn after the power ministry protested, it showed the petroleum ministry's bias. The government cannot afford to have its name dragged into a battle between two corporate giants.