Beginning of an economic recovery? 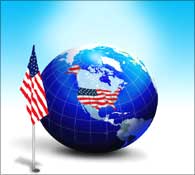 The advance estimates for US GDP during the second quarter of 2009 (April-June) point to a distinct improvement in overall growth performance. The economy declined by a seasonally adjusted, annualised rate of 1 per cent. This was better than the consensus forecast of minus 1.5 per cent and a significant improvement over the minus 6.4 per cent recorded during the previous quarter.

Of course, this is merely a first estimate, to be followed by one based on more complete information at the end of August. If the momentum that is responsible for the difference between these two quarters continues, the economy could return to positive growth in the third quarter itself, earlier than the fourth quarter transition that many forecasters have been expecting.

The factors responsible for the decelerating decline are many. Non-residential fixed investment and inventories both showed much smaller decreases than in the previous quarter. Non-residential investment had declined by almost 40 per cent during the first quarter but was contained to an 8.9 per cent decline during April-June.

This indicates that both commercial real estate and investment in equipment are stabilising, while the inventory numbers suggest that businesses are able to finance larger inventories as a result of normalising credit flows.

The one significant component which is showing persistent negative momentum is residential investment, mainly construction of new houses, which decreased by over 29 per cent, only slightly different from the 38 per cent decline in the first quarter.

On the trade front, exports of goods and services showed a much smaller decline than during the previous quarter, perhaps reflecting both better global conditions and dollar depreciation, while imports also declined by a much lower rate, which is reassuring news for export-dependent economies around the world.

As in virtually all major economies, the one significant component that showed positive growth during the quarter was government spending, at the federal, state and local levels. This suggests that the fiscal package approved early this year is beginning to spread through the system and is contributing significantly to the reversal of the decline.

At the aggregate level, the fact that the US economy is recovering somewhat more quickly than earlier expected is very good news for the whole world. But the pattern of recovery highlights the challenges that most governments will have to face as the recovery strengthens.

It is now hugely dependent on public spending. At some point, sustainability will depend on the ability of private spending to take on a leading role. The question is: will huge government programmes funded by borrowing "crowd out" a recovery in private spending? Higher interest rates and a turnaround in inflation do suggest that this is a risk.