When corporations capture the state 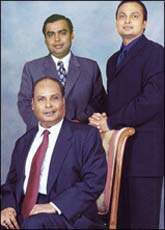 The danger of a corporate capture of government isn't imaginary, and corporations represent narrow profit-seeking interests of businessmen whose forte is not Constitutional values, says Praful Bidwai.

Regardless of what happens to the contentious dispute, also called epic battle, between the Ambani brothers over the supply of natural gas from the Krishna-Godavari Basin, three things are crystal-clear.

One, the dispute's huge political dimension dwarfs its legal or commercial issues such as the agreement signed between Mukesh Ambani's Reliance Industries and Anil Ambani's Reliance Natural Resources on the purchase of the gas at a particular price.

Battle-lines stand drawn between political parties over whom they'll back. The Supreme Court hearing scheduled for September 1 will further polarise opinion.

Second, the natural gas sector remains under-governed despite its importance -- not just financially, but as a key fuel in India's much-needed transition to a low-carbon economy. There have been about 100 discoveries of natural gas and oil since the New Exploration Licensing Policy was launched 10 years ago.

The value of these stocks is estimated at a substantial 15 per cent of India's GDP. But the government has generally adopted a 'hands-off' approach to the gas business -- only to intervene at critical junctures in a partisan manner.

Third, there is no clarity in policy on the use or pricing of gas, and on different options including conservation, pace of production and its alternative uses as chemical feedstock and fuel.

Excessive concentration and monopolies/oligopolies are emerging in gas production and downstream industries. These will raise costs across-the-board. And harm the larger economy.

Although the government says it will intervene in the Ambani case only to defend the 'public interest' and assert the national ownership of gas, it isn't easy for the public to believe it'll act impartially and fairly, given its recent record of caving in to powerful industrialists.

Meanwhile, in another scandal, India's private airlines are arm-twisting the government to rescue them as their losses skyrocket from Rs 4,000 crore (Rs 40 billion) to Rs 10,000 crore (Rs 100 billion). They even threatened to go on strike.

Although that call has been withdrawn, this cartel's pressure hasn't eased. It's demanding a reduction in the price of aviation turbine fuel (ATF), which is 40 per cent higher than in many Western/Gulf countries. It also wants airport user-fees lowered.

While the airlines have a point on the high fees charged by private airport developers, they're silent on their own default -- dues of more than Rs 3,000 crore (Rs 30 billion) to the National Airports Authority and public sector oil companies.

ATF prices are high in India because of cross-subsidies on diesel, kerosene and LPG. The airlines got into the aviation business fully knowing this.

Pampered for years, the private airlines are in trouble for two reasons. First, they expanded recklessly in their rush to grab as big a market share as possible. Second, the government deregulated the sector wholesale, jettisoning norms of prudence like adequate capitalisation, and allowing carriers to set their own routes, flight schedules and time-slots.

All kinds of fly-by-night (literally) operators entered aviation. They abused their 'freedom' to rig fares and slots and corner the public-owned Indian Airlines (since merged with Air India).

Furious expansion led to a 30 to 50 per cent overcapacity in aviation. But carriers kept ordering more aircraft to retain market shares, thus aggravating overcapacity and losing more money. They nurtured the illusion that air travel would become affordable for 'the common man'.

Many airlines set  their fares predatorily low to lure passengers away from rail travel. Yet, at the peak of the ultra-low fare regime, only 3 per cent of the Indian population was flying!

By 2007, many airlines had become unviable. Jet bought out Sahara and Kingfisher acquired Deccan in anti-competitive mergers, which shouldn't have been allowed in the first place.

Then came the economic slowdown. The private airlines, which are products of, and glorify, 'free enterprise', now want the state to rescue them with public money! The state should do nothing of the sort. Those who live by the free market should die by the free market.

This is a good occasion to ask some questions about business-politics relations in India. Contrary to the claim that liberalisation, launched in 1991, would end much-abused 'licence-permit raj' and make the government irrelevant in economic decision-making, the state's importance remains unaltered although its site and focus have changed.

Businessmen have become increasingly cynical in manipulating the state, often in criminal ways, to corner scarce resources and earn rent and super-profits. They have developed this into a fine art.

Indeed, Rajeev Chandrasekhar, immediate past president of the Federation of Indian Chambers of Commerce and Industry, says that liberalisation has not produced 'a new type' of entrepreneur -- 'espousing good corporate governance and honesty as the norm. Actually, the reverse is true. . .  [I]ncreased opportunities and . . .  political influence and public policy on the creation of wealth have. . .  created more greed and far too many corporates. . . [are] walking the narrow line between right and wrong. . .  This is the ugly side of economic liberalisation. . . '

It sets all tax rates, which can make or break businesses. It gives companies permission to borrow money at low interest rates from abroad, which can overnight make them richer by billions. It also determines the maximum area on which urban construction may be allowed. It's also responsible for all regulation. Markets, however developed, cannot function efficiently without regulation.

The key to business success in India lies often less in real entrepreneurship than in capturing these major functions of the state. Nothing guarantees you higher profits better than favourable official treatment, which allows you to corner resources, grab licences or establish monopolies.

That's why Indian businessmen invest so much in influencing policies and policy-makers, in creating lobbying institutions such as FICCI, Confederation of Indian Industry and Assocham, and in building personal relationships with and patronising political leaders.

Historically, Indian businessmen have used three methods in this enterprise: bribing or buying up ministers, and increasingly bureaucrats, to secure exemptions from the rules, to get permits or receive other favours; second, getting nominated to advisory bodies such as the Prime Minister's Council on Trade and Industry and various state-level committees; and third, influencing, if not determining, the appointment of ministers and senior officials in various departments of the government to rig high-level decision-making directly.

The first, well-established, route includes the creation of income-earning opportunities for politicians/bureaucrats and their relations and sharing of kickbacks on contracts, especially those generally shielded from public scrutiny such as defence deals.

The favours sought are increasing in their sophistication. In place of illegitimate licences or overnight changes of rules, businessmen want alterations in the terms of auctioning processes. Many businessmen have become MPs to access classified information on and influence policy on their industries.

The second method was inaugurated by the National Democratic Alliance, which nominated industrialists with a stake in particular fields  (e.g. infrastructure, textiles, aviation, information technology) to head policy advisory committees.

The United Progressive Alliance has continued this, albeit less blatantly. The scope of industry-dominated committees has been expanded to regulation too -- as with the just-created Food Safety Authority.

Once Big Business captures the regulatory heights, it's virtually impossible to control or monitor its activities and bring it to book. That's just what's happening to the environmental impact assessment and clearance process.

That's also true of the Satyam scam, which exposed the failure of all supervisory bodies, including the statutory auditor, independent directors, Institute of Chartered Accounts of India and the Securities and Exchange Board of India.

The third method is particularly pernicious because it means directly infiltrating the government. Yet, its use is growing. It's well known that certain business houses determine or veto appointments to crucial ministries, from the director or joint secretary level upwards. Their nominees always ensure that their narrow interests are protected.

And now, the UPA has established a fourth method by inducting business executives into minister-status jobs. The nomination of Infosys co-founder and ex-CEO Nandan Nilekani as chairman of the new Unique Identification Authroity of India with Cabinet rank and that of management consultant Arun Maira as a Planning Commission member set a bad precedent.

It's not that Mr Nilekani lacks competence or integrity. It's simply that his assignment is of a technical, not political, nature. It doesn't deserve to be sanctified by a high rank incommensurate with the absence of public accountability.

In the Cabinet system of government, ministers must be elected. Mr Nilekani could have been given a contract after due bidding for producing a unique identity for each citizen. As for Mr Maira, it's hard to justify the elevation of a corporate-oriented consultant to the Planning Commission.

The danger of a corporate capture of government isn't imaginary. It's a growing phenomenon. Sections of the media celebrate it as a great advance -- only by ignoring the clear conflict of interest that's involved.

Corporations represent the narrow profit-seeking self-interest of businessmen whose forte is not Constitutional values. But politics is a contestation about just those values and public morality. It must not be suborned by business interests.