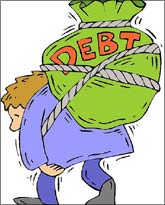 The strongest reasons for creating an independent debt management office (DMO) are also the ones for not doing it now, says Rajeev Malik.

"The fiscal consolidation achieved so far has encouraged us to take the first step. Accordingly, I propose to set up an autonomous DMO and, in the first phase, a Middle Office will be set up to facilitate the transition to a full-fledged DMO." --Former Finance Minister P Chidambaram, Budget, Feb 28, 2007

The actual reported federal fiscal deficit for 2007-08 was 2.7 per cent of GDP, better than the 3.3 per cent announced in the Budget. Unfortunately, it also marked the end of the short period of India's fiscal improvement, which in any case had more to do with the strong cyclical economic upswing than with fiscal responsibility. It is anybody's guess when and how the fiscal deficit will again be below 3 per cent of GDP.

There is never a good time for bad policies. But good ideas at times can cause unanticipated adverse effects--even wreak havoc--if they are implemented badly or at a bad time. Indian policymakers must appreciate the distinction, as it is not uncommon for their policy recommendations to be implemented selectively, or for the implementation to be less than ideal.

Ironically, the strongest reasons on paper for creating an independent DMO are also the weakest reasons for doing it now. India will undoubtedly have to graduate to a more mature financial playing field as it increases its integration with the rest of the world, but now is not the best time for creating an independent DMO. The importance of the timing is critical, and goes beyond how institutions look and interact on a blackboard compared to on-the-ground reality.

The current year's exceptionally high government borrowing programme could not have gone ahead without the RBI, as the monetary authority, being more accommodative of the government's shortfall. Thus, counter to the very basic foundation of independence for both the DMO and the central bank, the ongoing use of monetary measures is actually meant to facilitate a relatively non-disruptive government borrowing programme.

Indeed, in the recently concluded quarterly review in July, Governor Subbarao's statement emphasised, "In order to manage the government borrowing without crowding out present or potential private credit demand, the Reserve Bank will continue with its active liquidity management policy."

One does not have to be a rocket scientist to gauge what would have happened to the aam aadmi if we were blessed with an independent DMO and an independent RBI that kept to their objectives. In many countries, financial stability and the need to save the economy appear to have scored over institutional independence.

Indeed, it is better for India to acknowledge fiscal and monetary coordination openly rather than do it behind the façade of "independent" institutions, thereby compromising institutional credibility.

It is absolutely crucial for the government to ensure that lopsided implementation does not result in an unanticipated, but possible, outcome of both the RBI and the proposed DMO succumbing to a government that finds it difficult to get its act together on its finances. Such an outcome would be a lose-lose situation for all.

Indian governments have a poor track record of keeping their fiscal promises. Two-three years of fiscal improvement do not count as "sustained". Actions count much more than words and the government should fully deliver on its promise of tax reform and fiscal improvement before jumping on the bandwagon of an independent DMO by stripping the RBI of its respectable track record as a debt manager for the government, monetary authority and a banking sector regulator.

Unfortunately, an independent DMO is being peddled in some quarters as a lollipop that will lower the borrowing cost for the government. That is plain nonsense if the government itself does not sort out its finances. Indeed, the best DMO cannot salvage the problems created by a fiscally promiscuous government.

Finance Minister Pranab Mukherjee should not water the seeds of any change toward an independent DMO without first ensuring that the government earns the much-needed credibility by improving its finances for the next few years.

This should pave the way for sustained reductions in the statutory liquidity ratio (which at 24 per cent is draconian), depending on the RBI's take on the economic and monetary cycles. Only then should India move towards an independent DMO.

In the first term of the United Progressive Alliance, India was saved by the RBI as it resisted the pace and timing (but not the direction) of the government's reportedly ill-conceived rush towards accelerated capital account liberalisation. This hurried approach was despite the government and the economy being ill prepared for the consequences.

The RBI also rose to the occasion by not falling for the iconic "Inflation Targeting" that it was being pressured to shift to from the current "multiple indicators" approach (inflation targeting was in many ways an important culprit for the global credit bubble).

Now, we are dealing with the rush towards an independent DMO, despite the poor timing owing to the monstrous government borrowing that cannot even breathe without an umbilical cord to the central bank.

I'm sure that the astute Mr Mukherjee appreciates that reforms cannot be at the expense of financial, systematic and political stability, and there is little to be gained by ignoring the RBI's sensible advice on this matter.

It is best to avoid the cowboy approach of jumping the gun on the DMO without the government first showing some tangible results on fiscal improvement.

The author is head of India and Asean economics at Macquarie Capital Securities, Singapore. Views expressed are personal.