News
Business
Movies
Sports
Cricket
Get Ahead
Money Tips
Shopping
Sign in  |  Create a Rediffmail account
Rediff.com  » Business » Where is the food for all?

Where is the food for all? 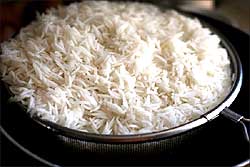 The Right To Food Bill talks of everything - entitlements, the different people who should be entitled, the way the food should flow to targets...But where is the food in all this and for all this, writes Sreelatha Menon.

The right to food campaign, which is a collaboration of people's movements from across the country, is now on the verge of seeing its demand of a right to food become a reality.

But Nobel laureate Amartya Sen, while endorsing it this week at a meeting of right to food activists, frankly said he had no clue as to what the government draft said. In fact, there is no draft so far.

So, playing it safe, he said there can be no single solution for anything, least of all food security. He listed education, health care and many other things, which have as much to do with hunger as a Right to Food Bill. But he also left out food and food production.

The one thing that, in these times of drought, calls for attention is agriculture or food itself, without which no law on food security can have meaning. This is a matter that has been overshadowed by the demand for food as an entitlement. In the process, the country could lose an opportunity to make food production viable and remunerative and, hence, abundant.

So, while subsidised food grain can be called a right for the poor in the country, remunerative agriculture is as much a necessity if food continues to be produced. This is not to mention that some of the poorest people make most of the food in the country.

Agrees Vijay Jaywantia, a farmer and activist from Vidarbha. He says that the right to food law makes no sense if it does not address food production. What right can you give when it has to be implemented through supply of costly imported food grains, he asks.

While 50 lakh metric tonnes of edible oils continue to be imported, there is little that is being done to boost oil production of locally produced and consumed oil seeds. Similarly, the rise in prices of tuvar dal in Burma has prompted the government to promise steps to boost local production. Had that been done earlier, then imports would have been unnecessary, says Jaywantia.

Will the Right To Food Bill ensure a minimum support price (MSP) for every commodity linked to the price index? No one is making such a commitment now, least of all the various drafts of the Bill in circulation.

Jean Dreze, an economist in the forefront of the right to food movement in the country, says that MSP should be linked to the Right To Food Bill as food production is vital. He agrees that the prevailing drought situation points at the need to make agriculture remunerative. But the framework for the law created by the right to food campaign does not mention MSP.

Another issue related to food and viability of production is the working of the public distribution system (PDS). The framework for the law prepared by the campaign talks of reforming the PDS. Not only do they want it universalised but they want to go one step further and make it localised.

Localised procurement, storage and distribution is always more desirable than food grains grown in some other state remaining in a godown in Punjab for two years till they cannot be eaten, says Dreze. This is a small step, which could create local markets for local producers an indirect way to food security. For a more complete law, however, food and its grower have to find a place.