News
Business
Movies
Sports
Cricket
Get Ahead
Money Tips
Shopping
Sign in  |  Create a Rediffmail account
Rediff.com  » Business » What the new Fed chairman should do

What the new Fed chairman should do 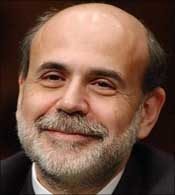 What the world needs is a Fed chairman instinctively sceptical of financial markets and their social value, says Dani Rodrik.

The race is on to fill the most important economic policy position in the world. United States Federal Reserve Chairman Ben Bernankes term ends in January, and President Barack Obama must decide before then: either re-appoint Bernanke or go with someone else the names most often mentioned are Larry Summers and Janet Yellen with more solid Democratic credentials.

It is a decision of momentous consequence not just for the US, but also for the world economy. As guardians of the nation's money supply and setters of short-term interest rates, central bankers have always played a critical role. Lower the interest rate too much, and inflation and monetary instability result. Raise it too much, and the economy slides into recession and unemployment.

Monetary policy is hardly a science, so a good central banker must be humble. He must appreciate the limits of his understanding and of the efficacy of the tools at his disposal. Yet he cannot afford to be perceived as indecisive, which would only invite destabilising financial speculation.

The dangers of failing at this task have been made painfully clear in the sub-prime mortgage debacle. Under Obama's proposed new rules, the Fed will have even larger responsibilities, and will be charged with averting financial crises and ensuring that banks are not taking on too much risk.

This is a job at which former Fed Chairman Alan Greenspan proved to be a spectacular failure. His blind spot on financial-market excesses the little flaw in his thinking, as he later termed left him oblivious to the dangers of Wall Street titans' financial innovations.

As a member of the Feds Board of Governors under Greenspan during 2002-2005, Bernanke can also be faulted for having played along.

The Fed chairman exerts global influence not only through monetary policy, but also through his words. He sets the tone for policy discussions and helps shape the belief system within which policymakers around the world operate.

What hampered Greenspan and Bernanke as financial regulators was that they were excessively in awe of Wall Street and what it does. They operated under the assumption that what is good for Wall Street is good for Main Street.

This will no doubt change as a result of the crisis, even if Bernanke remains at the helm. But what the world needs is a Fed chairman who is instinctively sceptical of financial markets and their social value.

Here are some of the lies that the finance industry tells itself and others, and which any new Fed chairman will need to resist.

Prices set by financial markets are the right ones for allocating capital and other resources to their most productive uses. That is what textbooks and financiers tell you, but we have now many reasons to be wary.

In the language of economists, there are far too many market failures in finance for these prices to be a good guide for resource allocation. There are agency problems that drive a wedge between the interests of the owners of capital and the interests of bank CEOs and other finance executives.

Asymmetric information between sellers and buyers of financial products can easily leave buyers vulnerable to abuse, as we saw with mortgage-backed securities.

Implicit or explicit bailout guarantees, moreover, induce too much risk-taking. Large financial intermediaries endanger the entire financial system when they use the wrong risk model and make bad decisions.

Regulation is at best a partial remedy for such problems. So the prices that financial markets generate are as likely to send the wrong signals as they are to send the right ones.

Financial markets discipline governments. This is one of the most commonly stated benefits of financial markets, yet the claim is patently false. When markets are in a euphoric state, they are in no position to exert discipline on any borrower, let alone a government with a reasonable credit rating.

If in doubt, ask scores of emerging-market governments that had no difficulty borrowing in international markets, typically in the run-up to an eventual payments crisis.

In many of these cases Turkey during the 1990s is a good example financial markets enabled irresponsible governments to embark on unsustainable borrowing sprees. When market discipline comes, it is usually too late, too severe, and applied indiscriminately.

In fact, neither expectation was fulfilled. In the years before the financial crash, capital moved from poor countries to rich countries, rather than vice-versa. (This may not have been a bad thing, since it turns out that large (net) borrowers in international markets tend to grow less rapidly than others.) And economic volatility has actually increased in emerging markets under financial globalisation, owing in part to frequent financial crises spawned by mobile capital.

We would have heard about a long list of mortgage-related instruments, which supposedly made financing available to home buyers who would not have been able to purchase homes otherwise. We now know where that led us. The truth lies closer to Paul Volckers view that for most people the automated teller machine (ATM) has brought bigger benefits than any financially-engineered bond.

The world economy has been run for too long by finance enthusiasts. It is time that finance sceptics began to take over.