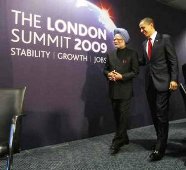 India should push the World Bank to focus on generating ideas and technology, says Arvind Subramanian.

In the run-up to the G-20 Summit in London in April, China created a frisson of excitement by pushing for the use of Special Drawing Rights (SDRs) as an alternative to the dollar as a global economic currency.

To be sure, China's demarche was self-serving. It is also true that when China now talks, the world must listen. But, the Chinese proposal was taken seriously because it had enough objective appeal and systemic relevance.

In all the discussions about the reform of the international economic architecture and the G-20 process, India's predominant concern has been with getting a seat at the table.

This desire for influence is appropriate and attaining it is long overdue particularly since existing international arrangements, especially at the IMF and World Bank, are outdated and inequitable. But acquiring influence cannot become an end in itself. "Influence for what" is a question that India must continually ask.

So, in the context of the G-20 discussions, what big idea could India put forward and pursue that, like the Chinese proposal, both served its long-term economic interests and improved the working of international financial institutions?

Here's a suggestion: India should push for a radical re-orientation of the World Bank, so that it undertakes less traditional lending to governments and focuses more on financing global public goods, especially relating to R&D in climate change, tropical agriculture and diseases.

The World Bank is seen as a financial institution, primarily concerned with providing official financial assistance to developing country governments. But this perspective needs to change both for India and the world.

India's need for official financial assistance is diminishing rapidly as it gains access to private capital markets and as India's own savings have risen dramatically over time.

Its development challenges - whether to cope with climate change or raise agricultural productivity - require technology breakthroughs, which India and all of Indian ingenuity cannot achieve on its own. India has a strategic interest in shaping the World Bank to generate some of this technology and other public goods.

The value to India of such goods is illustrated by the World Bank-financed and supervised research study - a classic public good - which brought to light the serious problem of teacher absenteeism in Indian primary schools.

This study provided valuable input into, and radically changed for the better, the policy debate in India on primary education. It fatally undercut arguments for pumping resources unconditionally into the public education system. How many of the Bank's traditional lending activities can claim such beneficial impacts?

From a systemic perspective too, the World Bank needs to evolve away from being predominantly an aid agency, dominated by the G-7 and serving Africa. The need for this evolution is suggested by empirical evidence.

It is awfully hard to find evidence that traditional World Bank-type aid works. In a series of papers, Raghuram Rajan, former chief economist of the IMF, and I were unable to find any positive effects of aid on long-run growth but did find evidence consistent with some of the negative effects of aid in depressing manufacturing exports and worsening domestic institutions.*

On the other hand, it is widely accepted that some of the biggest contributions to development have come from global public goods such as the green revolution and medical breakthroughs, especially related to the development of antibiotics and vaccines.

The technical discoveries leading up to the green revolution were financed by official aid and private philanthropy. And the adaptation of green revolution technologies to varying climactic conditions across the developing world was actually undertaken in the internationally-funded CGIAR network of research institutions (including the Hyderabad-located ICRISAT) that are now sadly in decline, in part due to international financial neglect.

Despite this evidence, the World Bank's current lending practices overwhelmingly favour traditional lending to governments over global public goods. The numbers are difficult to pin down but global public goods financing is unlikely to exceed 20 per cent of total World Bank lending.

In other words, current practice is inversely correlated with the evidence. What makes this inverse correlation particularly egregious is that there are many suppliers of traditional aid (bilateral donors, NGOs, private philanthropy) but few suppliers of global public goods.

The World Bank should be filling the latter empty space instead of further crowding the lending business.

In the run-up to the next G-20 summit at Pittsburgh, India is now considering asking for a substantial increase in World Bank's capital. More capital to finance more traditional lending would not, if the evidence cited earlier is right, yield the biggest bang for the buck.

Moreover, this capital would be poured into a structure of governance that is antiquated and skewed in favour of the G-7. What possible strategic interest of India is served by this proposal to enlarge the Bank's capital base and perpetuate the status quo?

India should rather put forward a new vision for the World Bank, with a central focus on global public goods, a point also emphasised and elaborated by Devesh Kapur, the author of the definitive history of the Bank. Nancy Birdsall of the Center for Global Development and I have argued that the governance structure for global public good activities should be quite different from current arrangements.

This could be the thin end of the wedge for perhaps eventually breaking up the World Bank into two institutions: first, an aid agency, devoted to traditional lending activities, which could continue to be dominated by the G-7; and second, a new institution that focuses more on the creation of global public goods, one in which middle income countries such as India, China and Brazil could start making greater financial contributions and, in return, obtain commensurate power and influence.

Referring to the two Bretton Woods financial institutions, Keynes once wittily observed that the "Bank's a fund and the Fund's a bank." Whether the IMF should continue to be a bank is being actively debated. But it is in India's interest to push the World Bank to be less of a fund and more engaged in generating ideas and technologies for development.

*These papers can be found at the author's website: (piie.com/staff/author_bio.cfm?author_id=488)