Why the Direct Taxes Code is flawed 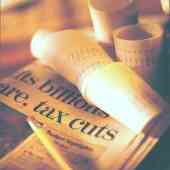 Times are bad. Drought stalks the countryside. In much of rural India distress is high and rising as the worst monsoon in over 20 years leaves lands parched and crops withered and raises food prices much above the meagre resources of landless labour and small farmers.

In urban India the fear of swine flu is spreading far and wide, long before infection rates attain expected peaks. In most states weak public health systems are struggling to face the mounting challenge.

Only one thing is sure: the pandemic will get worse before it gets better. In politics, the country's second most important national party, the BJP, continues on its astonishing path to self-destruction.

Its best people are being marginalised or expelled while a coterie of narrow, visionless power-seekers grab the reins. The hopes of resurrecting a two-party system at the national level are fading fast.

The industrial landscape remains roiled by the bitter feud between the Ambani brothers, which has also embroiled the government and the judiciary. In the capital, a minor storm blows a hole in the city's new, showpiece airport terminal, not long after deadly collapses in parts of the vaunted metro system.

In these dog days of August the Union finance ministry has floated a new, draft Direct Taxes Code. The Code has much to commend it. But its timing is clearly off and it suffers from serious weaknesses.

Much of it was conceived two years ago, when the macro-fiscal environment was far healthier. The economy was growing at 9 per cent a year.

Direct tax collections were showing unprecedented buoyancy, which was the single most important factor contributing to the government's successful fiscal consolidation between 2003/4 and 2007/8.

In that context it may have been reasonable to dream of sharp reductions in effective tax rates, engineered through both reductions in nominal rates and redefinition of tax brackets.

But the macro-fiscal context has changed dramatically, for the worse, over the past two years. Economic growth (y-o-y) has slumped below 6 per cent in recent quarters. Industrial growth has been anaemic (until June).

Corporate profits growth has levelled off from the soaring trajectory of past years. Wage and salary cuts have become commonplace in the organised sector (outside government). Unsurprisingly, direct tax collections dropped well below budget expectations in 2008/9 after the 30 per cent-plus increases of previous years.

And direct tax collection data for the initial four months of 2009/10 show growth of only 3 to 4 per cent. The government's combined fiscal deficit (including off-budget items) doubled in 2008/9 to 11 per cent of GDP and is budgeted to be of the same order in 2009/10. What's more, drought-related expenditures and below-budget tax collections could well raise the deficit for the present year.

Against this background, the deep cuts in personal income tax rates proposed by the Code seem most untimely, and possibly rash. If the Code's recommendations are enacted, everyone currently in the 20 per cent rate bracket will only have to pay 10 per cent and many of those in the 30 per cent slab (up to Rs 10 lakh per year) will also become liable for only 10 per cent tax!

For all those in the bracket Rs 10-25 lakh, the applicable rate will drop from 30 to 20 per cent. Indian personal income tax rates will become among the lowest of major economies of the world. In short, the Code proposes an extraordinary bonanza for Indian income tax payers, especially for those who are better off.

Neither the current fiscal situation nor any reasonable notion of equity justifies this huge giveaway. Nor is any credible evidence presented to suggest that at prevailing rates of taxation the rate cuts would trigger large improvements in compliance which might offset the massive revenue losses.

Incidentally, the remarkable paucity of criticism of this extraordinary income tax cut proposal may confirm the suspicions of those who believe that media commentators, as a class, allow self-interest to prevail over objective assessments.

More charitably, commentators may have fallen into the trap of believing that all tax rate reductions constitute "reform". As any self-respecting economist can tell you, the only area where such a general proposition may have some validity is in the domain of taxes on international trade.

There are some other significant problems with the draft Code. For example the proposal to levy a small, 0.25 per cent, wealth tax comes with a mind-boggling exemption of Rs 50 crore (Rs 500 million).

So, if you own assessable wealth of "only" Rs 49 crore (Rs 490 million), you are exempt from wealth tax! This in a country where the World Bank estimates that three-quarters of the total population subsist on less than $2 per day, or approximately Rs 36,000 per year. Surely, a wealth tax exemption limit of Rs 10 crore (Rs 100 million) would be generous enough?

On the corporate side, there is no good case for reducing the general rate of corporate tax below the top marginal rate for individuals, that is, 30 per cent. Indeed, there are sound arguments for equating the two.

The proposed restructuring of the minimum alternate tax (MAT) has already drawn much justifiable criticism, which I need not repeat (no lack of criticism here!). The structure of dividend taxation remains broadly unchanged.

In other words, dividends distributed by a company attract a 15 per cent tax at the company stage, while in the hands of recipients the dividends are tax-free. This means the present glaring anomaly continues, whereby super-rich, family owners of companies bear the same rate of effective dividend tax as the proverbial, poor widow with a few shares.

There are some obvious solutions to this anomaly, which do not seem to have found favour with the framers of this draft Code.

The draft Code proposes to overhaul the taxation of capital gains. The distinction between short-term and long-term capital gains will be abolished. All capital gains (subject to indexing of costs) are to be taxed at the regular rate applicable to the individual or company.

The proposal is appealing in its simplicity and completeness. The one big doubt I have is how negatively will this affect the mobilisation of risk capital in the Indian economy?

That exemption may have taken the pendulum to one extreme. My concern is that the present proposal now swings to the opposite pole. A better scheme for taxing capital gains may lie between these two extremes.

Let's hope the final Code eliminates all these weaknesses.

The author is Honorary Professor at ICRIER and former Chief Economic Adviser to the Government of India. Views expressed are personal