Foodgrain production in current is fiscal is likely to fall by at least 10%, if not more. It may be better to be realistic in our estimates than give unrealistic positive spin to these figures, says Himanshu Thakkar. 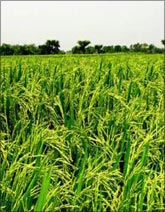 The Prime Minister's Economic Advisory Committee in its latest estimates has projected that during the current financial year, agriculture sector could experience minus 2 per cent growth.

However, in a year when the monsoon deficit has been 23 per cent, the highest since 1972, and when drought has been declared in 299 districts during the monsoon itself (a record by itself), this deficit seems to be a gross, misguiding underestimate.

The second quarter GDP figures released on Monday, strangely assume that the agriculture growth rate in the quarter will be plus 0.9 per cent in a drought-affected kharif!

Here the Central Statistical Organisation has assumed that 82 per cent of farm output will translate into 3-4 per cent growth rate in the quarter, which is either wishful thinking or some statistical gimmickry.

Finance Minister Pranab Mukherjee has said that the rice production during the rabi could reduce by 16 million tonne, which is an 18.91 per cent reduction compared to kharif rice production of 84.58 million tonne last year, as per the fourth advance estimates of the Union ministry of agriculture.

Moreover, there was also damage to the sown crop due to drought and flood. Hence, the rabi rice production is more likely to be around 65 million tonne, about 23 per cent lower than last year.

In fact, the first estimates of kharif production from the Union ministry of agriculture in early November 2009 showed that production in all crops is likely to go down by around 13 per cent, with the exception of cotton, which may see statistically insignificant growth. These figures did not include the contribution of animal husbandry, fruits and vegetables.

Secondly, these are the physical production figures: the financial deficit figures could be somewhat different, as Prof Suresh Tendulkar, former chairman of the Prime Minister's Economic Advisory Committee suggested to this author.

However, these hopes seem unfounded since the level of water as on October 22, 2009 (the significant date from the point of view of rabi season) in the 81 reservoirs monitored by the Central Water Commission was 8 per cent below the storage figure last year on the same date.

More significantly, the storage of water in the Indus basin reservoirs was a massive 39.12 per cent below the storage figure on the same date last year.

Considering the importance of these reservoirs for the north-west Indian states of Punjab, Haryana and Rajasthan, it seems that the hopes of rabi production going above the last year figure seems like wishful thinking.

It is true that with the predominance of groundwater irrigation in India, the deficit in reservoir storage needs to translate into a deficit in irrigation or agriculture production in rabi. However, it should be noted that the groundwater levels are plunging at alarming rates in Punjab and Haryana.

The Punjab government has already set the target of wheat production at 14.66 million tonne, down from 15.73 million tonne last year. Even this 7 per cent lower target seems difficult to achieve, considering the reservoir storage position in Indus basin. Similarly it is doubtful if Haryana will be able to realise its target of 11.46 million tonne.

Most significantly, it may be noted that the agriculture sector will also face implications of a high base this year since the foodgrain production last year at 233.88 million tonne was highest ever.

Here the experience of previous years when the country faced huge monsoon rainfall deficit could provide some guidance.

The previous four such years of high monsoon deficits in last 40 years, along with the decline in agriculture production experienced in respective years is given in the table here:

Thus it is clear that low decline in agricultural production in 1987-88, in spite of 19 per cent monsoon deficit was because the three previous years were also drought years.

When this author raised this issue with Planning Commission member Prof Abhijit Sen, he agreed that the deficit will be higher than 2 per cent estimated by the PM's Economic Advisory Committee, but he declined to hazard a guess what would be the likely deficit.

He said that the assumption that Bihar and eastern Uttar Pradesh will produce more wheat in current rabi is unlikely to be correct.

It is clear from the above analysis that if the past experience is any guide, the agriculture production in current fiscal is likely to fall by at least 6 per cent, if not over 12 per cent as in 1978-79.

Foodgrain production in current is fiscal is likely to fall by at least 10 per cent, if not more. It may be better to be realistic in our estimates and prepare for the implications thereof, than give unrealistic positive spin to these figures, as is the habit of many today.

Why Cong may consider Selja as next Haryana CM