Why globalism is the new villain

National borders are now more real than ever. Personal freedom is under attack in many forms. Visas are more difficult to get, writes Barun Roy. 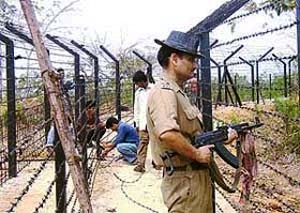 To many like me, the fall of the Berlin Wall in 1989 appeared to usher in a new world order, and when the Soviet Union finally collapsed two years later and the dark clouds of Cold War thinned, we heaved a sigh of relief. The change was sudden and dramatic, but we sang and danced and celebrated in the hope that the world would at last be open and one.

Twenty years on, that hope still remains a hope, but one that looks increasingly hopeless. New suspicions have replaced old enmities; new nationalist wars have reshaped Europe; Hutus are fighting Tutsis in divided Rwanda; the Middle East hasn't found its peace; Aung San Suu Kyi remains imprisoned in her house in Myanmar; Georgia has emerged as a new Cold War flashpoint, and the shadows of 9/11 keep getting longer and ominous, sowing death and terror along their path.

National borders are now more real than ever. Personal freedom is under attack in many forms. Visas are more difficult to get. Barbed wire fences separate the US and Mexico, India and Bangladesh, Israel and the West Bank, Myanmar and Bangladesh, parts of India and Pakistan, South Africa and Zimbabwe.

Invisible fences are many: Intrusive ID checks, random frisking and questioning, racial and biometric profiling etc. Patriotism is the new virtue, to be worn on the forehead like a holy tilak. Globalism is the new villain.

Darjeeling wants to break away from West Bengal, Vidarbha from Maharashtra and Kashmir from India.

Biharis don't feel safe in Maharashtra, Muslims in Gujarat. Christian churches have been vandalised and nuns raped in Orissa. Migrant workers have been attacked and killed in Manipur. Naga women in New Delhi are heckled as Chinese prostitutes. Two years ago, near Patna, a group of Yadavs poured steaming dal on a Dalit woman because her child played on a temple ground.

The 'blogosphere' is full of venom and hate. In that seething, reeling, abusive world of tooth and claw, despite the proclamations painted on our trucks and buses, India isn't one great country, but a million petty ones, where everyone is the greatest.

"Tamils need not emulate others," one blogger wrote recently, referring to Tamil Nadu's water dispute with Kerala. "Only others need to emulate Tamils." And a proud Keralan immediately responded: "When India becomes a superpower, there will be no Tamil Nadu, but we will have Tamils as coolie slaves."

Don't think blogs are always written by ordinary, uneducated people. Obviously, they're knowledgeable in English, good or bad, and computer-literate. Often they are young, and quite likely they have jobs with well-paying private companies.

What they write may be rubbish and dismissible outbursts of emotion, but it reflects their thinking and feeling, and it gives me shivers to know that an increasing number of young Indians have shut off their minds and feel nothing of going after each other's throats, shouting parochial slogans and waving parochial flags.

Around us, too, the old walls stand as solid as before. India can't trust its neighbours, nor can the neighbours trust India. Now, with international terrorism washing up on our shores, everybody is a suspect.

South-Asian regional cooperation has remained only a proclamation on paper and what could have been a common area of co-prosperity has become an area of mutual distrust. Our friendships end at our border crossings.

For 62 years, India and Pakistan have been going round the prickly pear, stalking each other in circles.  China and India won't settle their border disputes. Nepalese think Indians are too much of a big brother. Bangladesh and India are still trying to 'remove cobwebs' from their relations and sort out matters of trade, transit, river waters, and, increasingly, illegal immigration.

The great Tamil-Sinhalese divide in Sri Lanka has raised a greater political barrier between that country and India, and it may be a long time before the two can see each other in the face again without feeling uncomfortable.

One mighty wall had come down in Berlin but a thousand mightier ones have gone up around us, breaking up our worlds into ever narrower confines, keeping us imprisoned in our own little backyards.

We watch our neighbours on TV, talk to them on mobile phones, or send them messages and emails, but don't open our windows to call out to them and exchange greetings.

Because we can't. The walls stand too tight against one another. As technology makes a mockery of physical borders, nationalists at all levels are taking up positions to protect them with all their might, because, without these borders -- our unique IDs -- we wouldn't know who we are and where we stand in relation to everyone else.