News
Business
Movies
Sports
Cricket
Get Ahead
Money Tips
Shopping
Sign in  |  Create a Rediffmail account
Rediff.com  » Business » How India can cut its energy needs by 20%!

How India can cut its energy needs by 20%!

Using energy more efficiently can reduce our energy needs by one fifth; it is a strategy we must pursue even as we promote renewables, says Kirit Parikh. 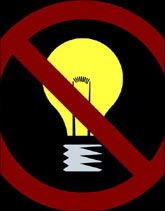 India needs to grow at 8-10 per cent for the next two decades if the country is to eliminate poverty. This will require our energy consumption to grow four- to five-fold.

With the full development of hydropower, an optimistic nuclear development scenario and improved availability of natural gas, we will need around 500 million tonnes (mt) of oil products, 200 billion cubic metres (bcm) of gas and around 2,000 mt of coal by 2030.

Coal will remain our main energy source. It is generally believed that we have very little oil and gas, but large coal reserves. However, the currently known extractable coal reserves will run out in 45 years if our coal consumption keeps growing at 5 per cent per year, as it has in the past 25 years.

Thus, it is important to promote energy efficiency, including in coal use. The growing threat of climate change also requires this.

The first task in saving energy is to increase the efficiency of electricity use. A unit saved at the consumer end saves 1.25 units of generation and saves further energy, as coal does not have to be transported.

The Bureau of Energy Efficiency has taken a number of steps. An efficient lighting programme to replace incandescent bulbs by compact florescent lamps (CFLs), labelling of electrical equipment, a pilot programme to promote energy-efficient pumps for farmers, the launching of an energy conservation building code, standards and benchmarks for designated industries, etc, have been initiated. These will reduce energy, particularly electricity, consumption.

To get the full benefit from the labelling programme, public sector procurement officers should be enabled to purchase equipment based on life cycle cost instead of initial cost, without inviting Vigilance Commission investigation.

The government should issue an order specifying the price preference that may be given to equipment with a higher star rating. Thus, for example, an air conditioner with a three-star rating that saves Rs 1,500 per year in electricity bills over a two-star-rated air conditioner, may be given a price preference of Rs 3,600, which is the present discounted value of savings over three years at a 12 per cent discount rate.

While economic incentives are important, setting energy efficiency standards for equipment can play a very important role. By periodically tightening standards, the average annual energy consumption of refrigerators in the United States was brought down from 1,825 kwhr in 1974 to 476 kwhr by 2001.

Such efficiency gains are even more important for us, as with an 8 per cent growth rate, we will nearly double our capital stock in nine years. Energy-using equipment and appliances will also spread rapidly.

Thus, the manufacturers of equipment and appliances should be targeted to force the pace of improvement in energy efficiency.

Major opportunities also exist in cutting energy use in other areas.

Increasing the efficiency of coal-based power plants: The fuel conversion efficiency of the existing population of thermal power stations is on average around 30 per cent.

Super-critical boilers can provide an efficiency of 38-40 per cent. No new thermal power plant should be allowed without a certified fuel conversion efficiency of at least 38 per cent. The pace of efficiency improvement needs to be forced.

Shifting freight traffic to railways: Improve railway service to win back the long-distance freight traffic carried by trucks today that consume five times as much diesel per net tonne kilometre of freight carried.

The construction of dedicated freight corridors should be completed as soon as possible. Carrying 3,000 billion tonne kilometres (bt-km) of freight (half of the projected freight traffic in 2030) by rail instead of trucks can save approximately 50 mt of diesel per year.

Plan for future mass transport corridors in smaller cities and acquire right-of-way. As the city grows, the permissible built-up area may be gradually increased. However, the additional right to build should remain with the local government, which it can auction to finance mass transport and other urban infrastructure.

Increasing the fuel efficiency of vehicles: By promoting hybrid vehicles that are already available commercially internationally and flexi-fuel vehicles that can burn varying proportions of ethanol-blended fuels, we can improve efficiency by 20 per cent or more.

Fuel efficiency standards should be imposed on vehicle manufacturers to force the pace.

Promoting renewable energy such as solar is critical for our long-term energy security. Presently commercially available solar photovoltaic cells of 15 per cent efficiency covering 10 million hectares can more than meet all our energy needs projected for 2030.

The cost of solar electricity today is about Rs 20 per kwhr, compared to around Rs 4 at the consumer end from coal power. The solar mission to be launched has the target to make solar cost-competitive to coal power by 2020.

There are, however, applications that use solar energy that are economical today that can reduce the need for energy from conventional sources. Solar water heaters are a case in point.

With 50 million home water heaters we can save 95 billion units of electricity generation, which means a saving of 65 mt of coal.

We are short on fossil fuels. Energy efficiency can reduce our energy needs by 20 per cent and is a major resource that we must use even as we promote renewables.

The author, a former member of the Planning Commission, is Chairman of Integrated Research and Action for Development (IRADe).