The cost of land 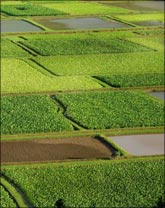 That the Anil Ambani-owned Reliance Energy Limited (REL) will be affected by the Allahabad High Court's decision on the land acquired by it for its 7,500 Mw Dadri power plant is obvious since the entire process of inviting objections to the acquisition has to be initiated from scratch.

So, if the 5,000-odd farmers who have sold their land to REL and signed acceptance agreements (ikraarnaama) are able to return the money paid to them by the company, they can list out their objections. While it is unlikely that all of them will do so, more so since REL has already paid out around Rs 150-160 crore (Rs 1.50-1.60 billion) to them, even a handful of farmers doing this will be enough to delay the project.

Meanwhile, the Anil Ambani group has been at pains to point out that while it is confident the Dadri land issue will be sorted out, it has no bearing on the case it is fighting in the Supreme Court against the Mukesh Ambani-owned Reliance Industries Limited (RIL).

The family MoU, according to the Anil Ambani group, says RIL has to supply gas to Dadri and other projects of the group -- whether the MoU that was signed by Mukesh Ambani is binding on RIL, of course, is one of the subjects under litigation in the court.

Lack of a transparent and clear policy on land acquisition can only hurt industrial development and employment generation. The Allahabad High Court, therefore, has implications that go beyond Reliance Energy since land acquisition has become a major problem for all large industrial projects in the country.

It has been Business Standard's view that inviting of objections and dealing with them is an important process that cannot be done away with -- this is what the Uttar Pradesh government did away with when it acquired the land under emergency provisions, though at prices which Reliance Energy says were double the prevailing rate.

But what is worrying is the argument that since the land was being acquired for a company, it could not be seen as being done for a public purpose -- "public purpose" was the argument used by the UP government for using the emergency provision.

Whether the land is acquired for industry or for a government project is immaterial, what matters is that land-losers are heard -- and if the majority don't want to be ousted, that needs to be respected -- and their demands for proper compensation/jobs met. There is also the issue of how long after the event court cases can be entertained -- in this case, the land was acquired three years before the court cases began.

In addition, there is the issue that comes up each time there is a case filed against a corporate entity -- that of whether the case has been filed at the behest of a business or other rival.

There is no easy answer to this question, but the courts need to devise a way to ensure the corporate veil, if any, is lifted in all such cases and transaction costs in land acquisition don't escalate.