China can maintain its currency undervaluation practices only at the risk of global macroeconomic imbalances, says Dani Rodrik. 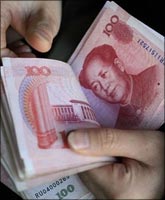 China's undervalued currency and huge trade surplus pose great risks to the world economy. They threaten a major protectionist backlash in the United States and Europe; and they undermine the recovery in developing and emerging markets.

Left unchecked, they will generate growing acrimony between China and other countries. But the solution is not nearly as simple as some pundits make it out to be.

Listen to what comes out of Washington and Brussels, or read the financial press, and you would think you were witnessing a straightforward morality play. It is in China's own interests, these officials and commentators say, to let the renminbi appreciate.

After all, the Chinese economy can no longer rely on external demand and exports to sustain its remarkable growth, and Chinese consumers, who are still poor on average, deserve a break and should be encouraged to spend rather than save.

This story casts China's policymakers in the role of evil and misguided currency manipulators, who, inexplicably, choose to harm not only the rest of the world, but their own society as well. In fact, an appreciating renminbi would likely deal a serious blow to China's growth, which essentially relies on a simple, time-tested recipe: encourage industrialisation.

Currency undervaluation is currently the Chinese government's main instrument for subsidising manufacturing and other tradable sectors and, therefore, promoting growth through structural change.

Before it joined the World Trade Organisation in 2001, China had a wider range of policy instruments for achieving this end. It could promote its industries through high tariffs, explicit subsidies, domestic content requirements on foreign firms, investment incentives, and many other forms of industrial policy.

But the WTO membership has made it difficult, if not impossible, to resort to these traditional forms of industrial support. China's tariffs declined precipitously in the late 1990s, and many of the other inducements were also phased out. Currency undervaluation has become a substitute.

It is not just China that benefits from a competitive currency. There is a strong positive relationship across all developing countries between currency undervaluation and economic growth. But this relationship is much stronger in China, presumably because the productivity gap between the rural, traditional parts of the economy and the modern, industrial sectors is so huge.

The trouble with currency undervaluation is that, unlike conventional industrial policy, it spills over into the trade balance.

It acts as a subsidy on the production of tradable goods (which is desirable), along with a tax on their domestic consumption (which is incidental and undesirable). Indeed, China's current-account imbalance, which had remained moderate until the current decade, began its inexorable rise in 2001 -- precisely when the country joined the WTO.

Given that WTO rules tie China's hands on industrial policy, how much of a growth penalty would the Chinese economy suffer if the renminbi were to appreciate? My estimates, crude as they are, suggest a steep trade-off. An appreciation of 25 per cent -- roughly the extent by which the renminbi currently is undervalued -- would reduce China's growth by somewhat more than two percentage points. This is a significant effect, even by the standards of China's superlative growth performance.

Most importantly, a slowdown of this magnitude would put China below the 8 per cent growth threshold that its leadership apparently believes is necessary to avert social strife.

No one knows where the 8 per cent figure really comes from, and many experts believe that China's society and polity are capable of handling much lower growth. But, even if political implications are put aside, it would be a tragedy if the most potent poverty-reduction engine the world has ever known were to experience a notable slowdown.

To be sure, other countries that relied on exports to grow rapidly -- such as Germany, Japan and South Korea -- eventually had to let their currencies appreciate. But China is still a very poor country, at barely one-tenth the income level of the US. It has a huge reservoir of surplus labour in the countryside. In addition, China must live with restrictions on its industrial policies that none of these other countries, in pre-WTO days, had to abide by.

So we are left, it seems, with two equally unappetising options. China can maintain its currency practices, but at the risk of large global macroeconomic imbalances and a major political backlash in the US and elsewhere.

Or, it can let its currency appreciate, at the risk of inducing a growth slowdown and political and social unrest at home. It is not clear that advocates of this option have fully comprehended its potentially severe adverse consequences.

There is, of course, a third path, but it would require rewriting the WTO's rules. If China were allowed a free hand with industrial policies, it could promote manufactures directly while allowing the renminbi to appreciate. This way the increased demand for its industrial output would come from domestic rather than foreign consumers.

It is not a pretty solution, but it is the only one. The great advantage of industrial policies is that they enable growth-promoting structural change without generating trade surpluses.

They are the only way to reconcile China's continued need for industrialisation with the world economy's requirement of lower current-account imbalances.