Turbulence in financial markets could mean that 'exit' from expansionary policies will be delayed, says Abheek Barua. 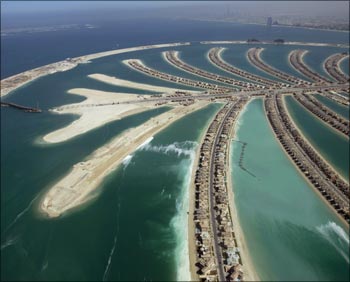 For about a week after the Dubai crisis broke, international financial markets chose to ignore it. Stock-markets climbed, commodity prices rose and the dollar continued to be beaten down. It is not too difficult to explain this initial indifference.

For one, the magnitude of the Dubai crisis appeared piffling, at first glance, compared to the 'subprime' crisis or the meltdown following 'Lehman's bust'.

When global banks had run up losses of close to $2 trillion over the last couple of years, did 'restructuring' of just $60 billion of debt repayments that the conglomerate Dubai World (DW) announced really matter?

The exposure of international banks to Dubai seemed relatively small. HSBC, the biggest lender, had assets of just about $17 billion, Standard Chartered, the second biggest, a modest $7.8 billion.

Some analysts saw Dubai's decision to delay payments as just a bit of sparring with its oil-rich but low-profile neighbour Abu Dhabi that had been trying to grab stakes in Dubai's profitable companies like Emirates Airlines.

Dubai, in their opinion, just seemed to be trying to needle Abu-Dhabi -- its decision did not have any deeper implications for the region's financial stability. Abu Dhabi had too much of a stake in Dubai to remain passive. If it came to the crunch, it would use its massive reserves of oil-dollars (about $630 billion parked in sovereign wealth funds) to bail Dubai out.

Others saw the markets' indifference to Dubai as confirmation of the fact that the new model of crisis-management in financial markets was working.

Central banks were standing by with ready infusions of liquidity that they could use to bail banks out if they faced a temporary liquidity shortage. Thus inter-bank markets across the world did not freeze up in response to the Dubai news. A local problem did not immediately escalate into a global crisis, it remained local. Hurrah!

The dollar that correlates inversely with the appetite for risk reversed course in the last week and commodity markets have halted their march. Switch on business channels on TV and you are likely to see market hands discussing the return of the bear market. Why?

For one, the dimensions of the Dubai problem seem much bigger than initially expected and the quick solutions remain elusive. The risk of default has spread beyond DW to other Government Related Entities (GREs) and government departments (like the railways); Abu Dhabi has refused to play ball and has committed only to a "case-by-case" assessment of Dubai's troubled companies, not a blanket guarantee.

More importantly, Dubai has resurrected fears that the financial crisis isn't quite done and dusted yet. Defaults by sovereign and quasi-sovereign entities could set off the next wave of financial turbulence.

It's not just government-backed companies, governments might default as well. Greece seems to be next in line to that default or restructure its sovereign payments.

Greek government bond yields have gone through the ceiling as have their credit default swap spreads. The fiscal position of Central and Eastern European (CEE) economies seems dangerously fragile. A much bigger economy, Spain, that is now on international ratings agencies' credit watch, could follow.

Then it could be the turn of the real biggies of the G-7 group. The UK could suffer a downgrade of its sovereign debt.

What are the implications for the global economy and India? For one, 2010 could be much worse than 2009, and risk-appetite that drove all "risky" asset markets up could give way to acute dyspepsia.

This will take a toll on emerging markets (the asset class that had the sharpest momentum in 2009), and that includes Indian stocks, debt and real estate.

There's a two-way relationship between financial markets and the real economy. Markets reflect the fortunes of the real economy and they also set the bounds to the economy's growth. If markets correct, it is unlikely that economic growth will remain unscathed.

To take a concrete example for India, external commercial borrowing inflows that have just started could see a setback and affect investment plans of companies.

The pipeline of qualified institutional placements could dry up. This will impair growth. Other economies could face a similar problem. In short, even if it manages to avoid a slump, the global economy could see a prolonged stasis in 2010.

Policy-makers cannot remain indifferent to this. The current turbulence in financial markets could well mean that the "exit" from expansionary fiscal and monetary policies will be delayed.

While it is true that the data and news-flow from the emerging world is better than that from the developed economies, it is unlikely that policy stances of the developed and developing world could entirely decouple.

RBI, for one, might just choose to wait for more news from the global economic front before hiking rates. Central banks from the developed world such as the US Fed and the European Central Bank that seemed set to tighten money supply in 2010 might see reason to hold back.

The pendulum of the financial markets had swung rather quickly from extreme fear in 2008 to greed. The year 2010 could see it swing back to fear. Caveat investor.

The author is chief economist, HDFC Bank. The views expressed are personal.