News
Business
Movies
Sports
Cricket
Get Ahead
Money Tips
Shopping
Sign in  |  Create a Rediffmail account
Rediff.com  » Business » Why we must 'speed up' India

Why we must 'speed up' India 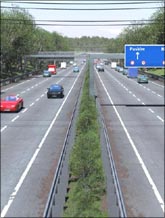 It's an irony. As India produces more cars of more varieties for more people, traffic in its cities gets slower and slower. While new trains are introduced by the dozen, speed of our railways hasn't improved in a hundred years.

New highways are being built, but cargo trucks on our roads don't move at more than 20 km an hour, on an average. The more we make a move, the more we seem to be stuck. The better our economy does, the worse is our gajagamini reputation.

In many cities, the average speed of a bus is 10 km an hour. A 'Duranto' means little when 80-85 km is the best average speed of even our fastest trains. What can one call a highway where driving is like running a hurdle race? What's the use of arriving at world-class airports, if getting home or to the hotel from there can drain all your patience and good humour?

Buoyant GDP growth alone won't make India a dynamic nation. We've got to speed it up, literally. Of course, a nation's ultimate dynamism comes from the buoyancy of its people -- the way people walk, move, react, respond, interact, and carry themselves in public, in offices, on the road and at places of services.

That's a matter of culture, discipline and motivation, which aren't easy to acquire. But a fast and effective speed-up of visible mobility is a useful first step in that direction.

We need to unclog our cities to make them more movable and liveable (the two are interrelated). Our urban focus must turn to enhance public mobility, as there isn't enough space for all the private cars we want to own and drive.

And, since we can't go on adding buses ad infinitum and dedicated bus corridors aren't always feasible, we must emphasise underground metros as the key element of our urban transportation policy. Only underground metros can move people on a large scale while easing up the scramble on the surface.

For the rest of the country, however, we need more travellable roads -- highways, expressways, all-weather byways -- and more cars to take us places. Mobility must be decentralised as widely as possible, with all the links in place. But we've got to re-examine how we build our roads and for what all purposes.

In all the world's highly mobile countries, highways are meant to provide a thorough passage, unhindered by crossroads and traffic signals. They run either above or under intersections. Road signs are visible from a distance. Exits are clearly marked and numbered.

Local traffic uses service roads. Nobody bolts across at will. All these factors have a positive impact on speed, but we haven't learned to care. Our highways are little better than upgraded village roads, but we don't seem to mind that.

We need to change. We must run our highways and expressways the way the rest of the mobile world does. We must have separate corridors for passengers and freight.

That's the primary condition for gearing up our drive. We must also enforce highway discipline while removing interstate bureaucratic hassles and legalities that are often a major cause of highway delays. That's condition number two.

China is one country that is reaping the benefits of streamlined, disciplined, purpose-specific transport infrastructure, and if we have any ambition to be identified as a mobile nation, and not as a sloth, it would be wise to go in the same strategic direction.

Simultaneously, we must transform our railways. Those who have read Paul Theroux's Riding the Iron Rooster will agree what China has done with its railways is nothing short of a revolution. India is still in an age where it takes Himsagar Express 75 hours to run the 3,745-km distance between Kanyakumari and Jammu Tawi.

That's 50 km an hour, nothing better than a mechanised elephant. Our fastest train, the Bhopal-New Delhi Shatabdi, has an average speed of 87 km an hour. Call it a motorised rickshaw?

We need faster trains and a thorough renovation of tracks to support them. We need a vigorous programme of laying new tracks, reaching new destinations, electrifying the route network and putting in sophisticated signalling systems. What we don't need is eyewash.

Above all, we need total and dependable connectivity. As long as India's rural interiors aren't served by all-weather roads, India will always look to an outside observer to be stuck in a stagnant pool of time, no matter how fast its economy grows.

We may call that ahalya bhumi eternal India, but that has no value for a nation with dynamic ambitions.

Ironically again, while Tata's Nano seeks to bring mobility to the Indian heartland, Jairam Ramesh, the environment minister, thinks it is a bad idea. He doesn't say we must build more roads to help that effort. Talk of turning an elephant into a leopard!