Mamata may have embarrassed Lalu, but. . .

Although Railway Minister Mamata Banerjee's white paper points out areas of concern, it lacks the courage to confront them, says A K Bhattacharya. 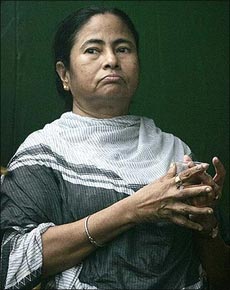 Yes, there is no doubt that Railways Minister Mamata Banerjee has used the white paper to score some points against her predecessor, Lalu Prasad. Indeed, the document is embarrassing for the United Progressive Alliance government for two good reasons.

One, Lalu Prasad was one of the few successful ministerial mascots that the UPA government had projected in its first five-year term that began in 2004. Even Prime Minister Manmohan Singh had heaped praise on Lalu Prasad for having turned around the Indian Railways.

Now that Mamata Banerjee's document has picked holes in the claims of financial turnaround during the five-year tenure of Lalu Prasad, will the UPA government or its prime minister come out with a reassessment of the performance of its erstwhile ministerial colleague in UPA-I?

That seems extremely unlikely, although Banerjee's white paper has used a set of practical and realistic accounting tools to show that the Railways claims of cash surplus in the last five years were inflated. The surplus, as a consequence of the analysis, did not completely vanish, but it was considerably reduced and certainly not what the Indian Railways under Lalu Prasad had claimed.

The white paper does not suggest any financial fraud. All it hints at is financial opacity, but without any attempt at cooking up numbers. But in today's environment of what happened to Satyam Computers and its promoter Ramalinga Raju, political attacks against Lalu Prasad are likely to be influenced and even coloured by such insinuations.

So, even though Banerjee embarrassed her prime minister, she appears to be quite pleased with herself for having scored a major political victory against her predecessor.

The other reason for UPA's embarrassment is the white paper's suggestion that Lalu Prasad's tenure as the railways minister was overshadowed by better performance in the 1991-96 period, when a man by the name of C K Jaffer Sharief was the railway minister.

It is widely known that Sharief was reaping the fruits of the good labour put in by one of his predecessors, namely Madhavrao Scindia.

The investments made in modernisation and capacity creation by Scindia during the second half of the 1980s was what Sharief exploited to the Railways' great benefit in the first half of the 1990s.

What aided that process was the pick-up in the Indian economy witnessed during that period.

In the same way, Mamata Banerjee is likely to reap the dividends of what Lalu Prasad did with the Indian Railways between 2004 and 2009, when substantial investments were made in a bid to create more capacity and without straining the central exchequer.

The white paper has another significant implication. Rail Bhavan bureaucrats have used the document to reclassify the Indian Railways' financial performance numbers in a manner that will make Mamata's task a little less onerous next year.

By using new accounting methods, the cash surplus figures have been brought down substantially for all the last five years.

Even the impact of the recommendations of the Sixth Pay Commission on the Railways' total working expenses has been spread out over the last four years, instead of it being reflected only in the last financial year's numbers. Thus, when Mamata Banerjee presents the Railway Budget for 2010-11 next February, her numbers would be compared with the revised, pared down numbers particularly on cash surplus and working expenses.

This is an advantage that will help both the Rail Bhavan officials and Mamata Banerjee. Her cash surplus figure will not be substantially smaller than the reduced cash surplus figures (of course, after the revision done through the white paper) of the Lalu Prasad era.

Similarly, her working expenses would not show any sharp variation over the figures in the previous five years.

This may be smart thinking and clever financial re-engineering of the Railways' numbers. But Banerjee or the Rail Bhavan officials cannot shy away from the fact that an opportunity to tackle the larger issues (the increasing financial burden on the Railways on account of pensions, corporatisation of the Railways' functioning and raising the Railways' share in total freight traffic, which is now down to almost a third of the total) has been lost.

The white paper highlights all these areas of concern, but lacks the courage to confront them with bold solutions.

Banerjee may have succeeded in embarrassing Lalu Prasad. But it is likely that five years later she too will be embarrassed for her reluctance to tackle the more serious issues confronting the Railways now.

Will the queens rule or be king-makers?