The climate accord secured for India a place at the high table in recognition of its importance for the rest of the world, says Subir Roy. 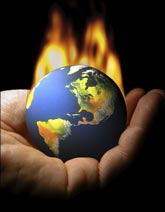 India should feel rather satisfied by the way it has gone through the extended climate change negotiations culminating in the accord at the Copenhagen meet. It can be said to have become a permanent member, one among the critical five -- along with the United States, Brazil, China and South Africa -- that form what can be christened the UN Climate Security Council.

For good (massive growth engine) or for worse (potential large polluter), it has been acknowledged as a power -- a somewhat unique soft power -- that matters.

And it has been able to achieve this by both strengthening good relations with the current sole super power, the US, and successfully establishing a working relationship and channels of communication with the emerging super power, China.

To take the final act first, right through the two weeks at Copenhagen, the heat was not on India but China, which positioned itself as the spearhead of the challenge to the developed world.

Despite this reluctance to engage in open confrontation, at the end of the day India had its way on its agenda. It compromised on no matter of substance like committing itself to legally-binding emission cuts or agreeing to outside verification of its unsupported actions and claims on emission cuts.

The climate summit was, of course, a virtual failure. The final accord provides for a pale list of non-binding emission cut commitments from nations as they individually see fit, and an equally vague list of funding promises.

Even this vastly watered down final draft was not accepted by all but merely taken note of. The consequence of the absence of a binding deal with firmer commitments will be the harshest on the poorest and developing small island nations.

The world is clearly living on borrowed time, like a cancer patient who refuses to give up smoking despite being told by doctors that it is the smoking which is the root cause.

The only reason for some optimism is that the cancer has been detected at an early stage and there is still hope for recovery provided the right regime is adopted soon. Even if a legally-binding accord, no matter how modest, can be thrashed out next year, the world will know where it stands and not be left feeling it is in a free fall.

Against this, the major gain for developing countries is that they have this time around not been browbeaten into accepting an unequal agreement in which they have been had in the fine print, as with the Uruguay round; a sleight of hand that unraveled only with time. The developing countries have signalled a change in the post-World War II rules of the game.

As for India, its ability to keep peace with both the US and China is a major departure from its post-Independence global stance that persisted till the early 80s. Had the non-aligned mindset of the Nehru-Indira Gandhi era persisted, India would have been standing beside Venezuela, Bolivia and Cuba and condemning the developed world without any lines of communication with them.

The Indian stance at Copenhagen took a year or more to develop and it is here that the nature of the Indian democratic process and polity played a crucial part, putting on full display its soft power.

The boon was to have an informed, articulate and non-dogmatic minister in charge, Jairam Ramesh, who had his basics right but was also willing to simultaneously engage with almost anybody so as to evolve a national consensus. Civil society in the country also played a critical role in powering an intensive public debate on the subject and evolving an informed consensus.

As the conference drew near, there were serious protests that many of the elements of the Indian position which were becoming sacrosanct were being jettisoned by the government in seeking to keep the US within the global climate dialogue.

Leaked internal communications of the government seemed to confirm the capitulation to the US. Finally, at the eleventh hour, two respected private individuals, who were part of the Indian negotiating team, threatened to walk out, pointing to the compromised Indian position. This prompted the minister to engage intensively with them in order to reassure them.

This informed, intense public debate and scrutiny, the stuff of democracy, resulted in the Indian delegation going to the conference with a clear brief. It and its global interlocutors knew how far it could go and where it could not cross the Lakshman rekha.

At the end of the day, the accord bore no sign of any serious deviation from the brief that the nation gave its representatives for the meeting. Simultaneously, it secured for India a place at the high table in recognition of its importance for the rest of the world. India has done worse than this earlier.