Water woes: Is it self-made?

As global warming makes the weather more unpredictable, the water economy of urban India will have to be planned without depending on reservoirs getting routinely filled up by rain every year. 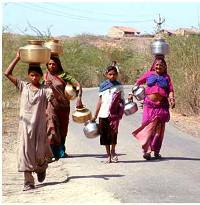 Nearly all large cities in India are in the grip of a serious water shortage, as revealed in a series of reports in a paper, which is likely to get worse as migration continues and rising incomes raise people's need for water.

Mumbai is merely the worst affected right now because of poor rain last season, but the crisis goes deeper than one truant monsoon.

As global warming makes the weather more unpredictable, the water economy of urban India will have to be planned without depending on reservoirs getting routinely filled up by rain every year.

In this, the country is burdened with the historical legacy of cities having come up where commerce suited them to be rather than where they ought to have been with plentiful water and good weather enabling a disease- and hassle-free life.

There is reason to be pessimistic about the future because most of the solutions being contemplated will not deliver. There is an unending quest for river and reservoir sources which can only be located further and further away with massive investment in civil engineering projects contemplated to bring the water over long distances to the urban centres.

As the countryside is also in acute need of water for its own sustenance and to meet the entire country's need for food, the solution to the cities' water problem has to be sought mostly within the cities themselves by trapping rainwater, saving water and recycling as much of waste water as possible.

A part of the solution lies in simply running the water utilities better. Just as there is Delhi which is an epitome of mismanagement with non-functional metering and low recovery, there is Bangalore which has set a benchmark in efficient metering and regular collection.

Another solution, keeping the future in mind, lies in regulating and pricing the exploitation and use of groundwater. If this is not done, then groundwater levels will keep travelling lower and start scripting a disaster in the not too distant future.

Shortsightedness is writ large over the Kolkata scene where per capita water availability is about the highest in the country but wastage is rampant as none, not even the middle class and the rich, pay for their water.

The Ganga, which is currently the city's saviour, will not be so munificent for all time to come and may even cease to be a perennial flow in decades once glacial melting because of global warming gets serious. Water use has to be charged through pricing reflecting long-term sustainable cost.

There need be no controversy over whether poor slum-dwellers should be made to pay because they already are, often with money and invariably with their time.

The long queues before community water points in slums tell the tale. Community ownership of such water points and recovery of at least variable costs should not be difficult to organise with the help of NGOs.

In this gloomy scenario, there are a few good practices which offer hope and models for replication. One is Chennai, which now has a well-established system of mandatory water harvesting which has made a difference.

The other is the highly-successful, World Bank-aided scheme in the Hubli-Dharwad twin cities of Karnataka whose good infrastructure, efficient delivery and recovery of user charges have enabled 24x7 supply of affordable water, unheard of in the rest of the country.

India not in same league as US, China: Analyst