All nations are equally endowed with radio waves, or 'spectrum'. But some do better than others at using this resource. Currently, by trying to optimise spectrum use measured by communications-traffic-per-unit-of-spectrum, our benefits are suboptimal.

India's misplaced emphasis on this kind of spectrum efficiency results in economic inefficiency. Some basic issues concerning spectrum allocation must be addressed before misdirected considerations of government revenues or fiscal deficits lead to self-inflicted damage from ill-advised auctions.

India needs a more rational spectrum allocation policy for better communications, including broadband at reasonable prices. We can learn from the experience of other countries.

Our predicament results from pursuing inappropriate objectives. Imagine building roads to minimise land use without taking into account the objective of carrying capacity or transit time for optimising throughput.

While less land may be used, the roads would be narrow, cluttered with bottlenecks, and afflicted with low throughput.

What if we sought to maximise net benefits instead, ie, carrying capacity balanced with costs, with well-designed, multi-lane roads, even if more land were required. If our goal were net benefits (however defined, with whatever social and economic attributes), we could maximise these, instead of some other measure that reduces net benefits.

With radio waves, our goal is apparently 'efficient' spectrum use measured by the technical yardstick of traffic-per-unit-of-spectrum, and not net benefits.

This is analogous to the example of constricted roads, even without the problems of land availability. Because of this, our spectrum usage is not driven by net benefits. So, India has the most 'efficient' use of spectrum as measured by traffic-per-unit-of-spectrum, according to a report by consultants to the Spectrum Allocation Committee (SAC), which made its recommendations in May this year.

However, the consultants point out that India is burdened with additional costs, as we need both more equipment and better technology. Further, by restricting spectral carrying capacity, we get less overall utility. 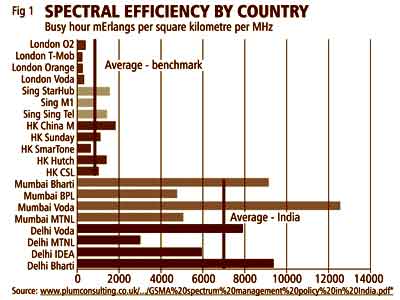 What if we set the right goals?

By setting different goals, eg, efficient capacity resulting in net benefits, we could capitalise on economies of scale and increase net benefits.

In India, a communications company gets a small sliver of spectrum depending on its technology, ie, GSM operators get 8.8 MHz, while CDMA operators get 5 MHz.

Once these companies get subscribers, the government provides another sliver of spectrum. Further, the amount of spectrum provided for a given level of subscribers has been reduced from one-half to one-fourth between 2006 and 2008. That's like reducing NH1 to a single lane each way.

India has more operators per circle than anywhere else, higher network costs, and services nowhere near as good. Consequently, operators have to use more equipment inefficiently because of limited spectrum.

Second, they need more advanced (ie, expensive) technology to make the most of each unit of spectrum.

Third, service quality drops as the density of subscribers saturates the capacity of available spectrum; else, they must invest more to prevent deterioration.

How does this compare with the rest of the world?

Other countries have three to five operators (China, Hong Kong, Indonesia, Malaysia, the Netherlands, Pakistan, Singapore, South Korea and the UK), while India has 11 to 12 operators per circle with more expected, going up to 14-16. Spectrum auctions imply more operators and even more intense, inappropriate competition.

How things could be

India's policy of a large number of operators leads to fragmented spectrum assignment, with lower traffic capacity for a given amount of spectrum (like narrow roads in land use).  Limiting the number of operators was found beneficial by Vodafone for the UK as cited by the consultants (Figure 2), as well as by a 2008 study in India.** 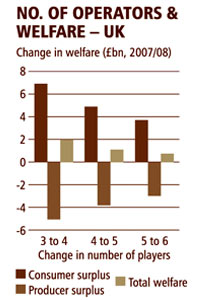 The consultants estimate that India's spectrum usage is eight times more intense than in the UK, Hong Kong or Singapore. Operators in these countries have from 16 MHz to 26 MHz, the latter for the Netherlands, UK, Singapore and Malaysia; Pakistan has 14 MHz.

The average spectrum per operator in these countries is nearly 22 MHz with far better services, against India's average of 5.5 MHz. Advanced technology in India implies significant costs for operators as well as for users, because of more advanced handsets. The consultants suggest that advanced technology be deployed only when it is cost-effective.

The SAC has some constructive recommendations, eg, an expert group to rationalise the use of the entire spectrum, a uniform spectrum fee, and fewer operators to avoid fragmentation as in other countries.

Some recommendations, however, are seriously flawed from a net benefits perspective, ie, faster, more ubiquitous services at reasonable costs. One of these is a preoccupation with pricing and spectrum auctions, whose goal -- collecting revenues -- is in conflict with the goal of net benefits.

Another is delinking service licences from spectrum allocation, whereas access to spectrum may be the most effective way to deliver services. Unfortunately, the committee's charter did not stipulate net benefits and broadband as goals. Therefore, the committee did not address either.

The government needs to act on the SAC's positive recommendations, while reviewing and addressing the basic purpose of communications, which is presumably for net benefits ('welfare') in the public interest.

** Figure 4.1 from the Plum Consulting report above, and Table 5, Optimal Number of Operators in 2010, from 'Optimal Number of Mobile Service Providers in India: Trade-Off between Efficiency and Competition', Rohit Prasad & Vardharajan Sridhar, International Journal of Business Data Communications and Networking, Volume 4, Issue 3, 2008.