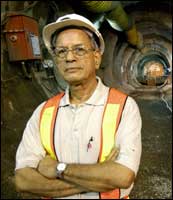 Till even a few days ago, if you took a poll, despite the recent string of disasters in the Delhi Metro's construction, most Delhi-ites would want Delhi Metro Rail Corporation (DMRC) chief E Sreedharan to stay on.

Accidents happen in all big projects, the argument goes, but Sreedharan is one of the few people who accepted moral responsibility, he has always delivered on time, he's honest, he had to speed up things to meet the Commonwealth Games' deadline, and so on.

So much so that India's crown prince Rahul Gandhi called him up to say, "Please don't quit, we are all behind you."

This view of him being indispensable is shared by Sreedharan who, all along, has opposed private sector metros and has recommended his model be replicated -- in cities like Kolkata and Chennai, DMRC is even the prime consultant in projects which, like the DMRC, are 50:50 partnerships between the state and central governments. Others have recommended the model be extended to other infrastructure projects.

These worthies would do well to read the Comptroller and Auditor General's stunning indictment of how DMRC is run (http://www.cag.gov.in/html/reports/commercial/2008_PA17com/contents.htm). For one, it points to the novel 50:50 management structure to mean that neither of the governments is in charge, so the company is pretty much run by the management, namely Sreedharan.

The company's board doesn't even have the token independent director. There appears no standard procedure for evaluating contracts and several changes have taken place in contracts after they have been won.

The CAG talks of testing standards being watered down to meet deadline, of tests being conducted in non-accredited laboratories, of these being done without DMRC staffers being present, and so on.

To top it all, DMRC hasn't kept any records of test reports since it 'would involve additional expenditure'!

Apart from what it tells you about how arrogant DMRC has become, it points to the impossibility of the Sreedharan model being replicable anywhere. For one, how do you see any politician-bureaucrat ceding all powers to someone else, and not changing the head for over 14 years -- the NHAI, by way of contrast, has had three chairmen in three years.

It is to the credit of Sreedharan's integrity that no allegations of corruption have been levelled against DMRC -- but how do you ensure that the heads of his 50:50 JV model will be as honest as he and shouldn't there be some public oversight when the Rs 10,600 crore (Rs 106 billion) spent on the project is all public money?

Interestingly, when Sreedharan and others talk of the Delhi Metro's success, vis-a-vis the Bus Rapid Transport corridor for instance, none talk of the huge concessions given to it by the government.

Sreedharan was quick to shoot off a letter when the Hyderabad Metro project was given land for development and said the model could 'lead to a big political scandal'. Well, DMRC's loan base of Rs 6,648 crore (Rs 66.48 billion), for instance, is highly subsidised by the Government of India and no dividend has been paid on the government equity of Rs 3,702 crore (Rs 37.02 billion) either -- this alone implies an annual subsidy of more than Rs 1,000 crore (Rs 10 billion).

Another Rs 240 crore (Rs 2.40 billion) a year or thereabouts comes from the various tax concessions given to it. And while the Hyderabad Metro got 269 acres of land, DMRC has got several times this.

Indeed, DMRC is not even willing to pay Rs 452 crore (Rs 4.52 billion) of property tax that the Municipal Corporation of Delhi has levied on it, citing the chief secretary of Delhi's decision saying it would not be levied.

Had the BRT project been given even a fraction of the autonomy Sreedharan has been given, and an even tinier subsidy (if the Metro has 10 lakh -- 1 million -- users, that's an annual subsidy of Rs 12,400 per passenger), there is little doubt it would have revolutionised Delhi's traffic.

So the next time someone asks 'after Sreedharan who', let's understand that his model is not replicable. More important, it is not desirable. If you want private sector efficiency and accountability, which is what the Sreedharan model was supposed to achieve, why not let the private sector do it?

Like all other models, the private sector will perform only under strict supervision -- in DMRC's case, however, the 50:50 model ensures that, apart from Sreedharan, no one is keeping tabs on a Rs 10,600-crore project built from public money.

And even he is not infallible.