Carbon dioxide can actually be good for farming 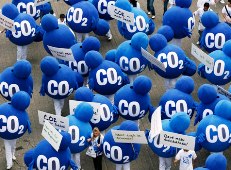 A higher carbon dioxide concentration in the air can help increase the productivity of certain crops, says Surinder Sud.

Carbon dioxide is infamous as a pollutant. It is one of the key greenhouse gases (GHGs), along with methane, nitrous oxide and fluorinated gases, which cause global warming and consequential climate change that has ominous implications for agriculture.

But, what is generally not duly appreciated is that the CO2 also acts as a yield booster. The reason why this aspect of the CO2 is not talked about that often is because it tends to be outweighed by the negative impact that the GHGs-induced high temperature has on the crops.

A national network project, run by the Indian Council of Agricultural Research since 2004, carried out to study the impact of climate change on Indian agriculture, is also throwing some light on the complex inter-relation between CO2, global warming and crop productivity.

As many as 15 research institutions are participating in this significant effort to evaluate the vulnerability of Indian agriculture, livestock, fisheries and other sectors to global warming and to suggest adaptation strategies needed to mitigate the adverse effects.

The results of the studies on wheat have indicated that a rise of one degree Celsius in the mean atmospheric temperature, when associated with increase in CO2 content, will not cause any significant loss of the overall wheat output in India.

The adverse effect of such an increase in temperature can be neutralised by simple adaptation strategies, such as change in date of planting and the use of crop varieties which can pass through their temperature-sensitive stages before the onset of heat.

Importantly, without the increase in CO2 concentration, even a degree Celsius rise in temperature may cause country's total wheat output to tank by about six million tonnes.

The output loss may swell to a whopping 27.5 million tonnes if the mean temperature shoots up by five degrees Celsius due to global warming in the absence of any increase in the CO2 content of air.

The impact of temperature and the CO2 on other crops is also being investigated under this project. Indigenous methods have been evolved for CO2 enrichment of the air in open crop fields for this purpose.

The creation of such CO2-enriched rings cost Rs 20,00,000 and about Rs 1,500 a day are required to maintain these, according to Professor P K Aggarwal, ICAR National Professor working on climate change at the New Delhi-based Indian Agricultural Research Institute.

Aggarwal is also the technical editor of a forthcoming publication of the ICAR which will contain the results of the studies dealing with climate change under the national project.

The data on CO2 levels and productivity of different kharif and rabi crops, collected so far, has indicated appreciable yield enhancement with a rise in CO2 levels. At a higher concentration of CO2 (550 parts per million), the output of crops like moong, gram and soyabean has been found to surge 9-15 per cent and that of tomato, onion and castor by even higher margins of 24 per cent, 26 per cent and 35 per cent, respectively.

However, there is a downside to this. The higher concentration of CO2 reduces the content of some critical constituents of plant leaves which, in turn, encourages higher consumption of the foliage by pests. In an experiment, a common pest called tobacco caterpillar (Spodoptera litura) ate up 39 per cent more leaves of castor crop at elevated CO2 levels.

The practice of having lower content of nutrients in the leaves made the insects feed slowly, but voraciously -- this led to consumption of higher quantities.

Aggarwal maintains that changes in agronomic practices and sowing of drought-tolerant plant varieties can help lower losses due to global warming in the initial stages. But in the longer run, more aggressive mitigation and adaptation measures would be needed to cope with the enhanced climate variability caused by global warming.

Indeed, scientific studies and scientists can only caution against the challenges that the climate change is likely to throw up and suggest the possible strategies to face these challenges unscathed.

But considering the financial crunch of the farmers, especially the small and marginal ones who predominate the Indian farm scene, putting the desired strategies into practice would not be easy for them.

A well-conceived policy framework, which makes the changeover to newer farm practices cost-effective for the farmers, would be critically needed. Otherwise, the resource-starved tiny farmers would be unable to cope with climate change.