The current IOC chief should be fired because be should have ensured that safety audits are done seriously. If he is sent home, his successor will take safety more seriously, says Sudhir Bisht. 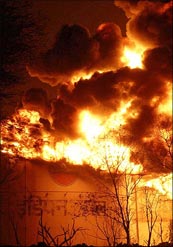 I am distraught at the devastating fire that broke out on October 29 at the IOC Jaipur terminal, a unit that is a large storage and distribution dump. The inferno claimed 12 lives.

It is neither a manufacturing unit nor does any transformational process take place at this terminal. All it does is receive parcels of petroleum products through a pipeline and loads it into wagons or trucks.

There can be no other reason for the fire but carelessness and a disregard for basic safety norms. Yet, I do not think the Jaipur terminal did not have the safety infrastructure to deal with a major/minor leakage. The rot lies elsewhere.

A major fire in Shakurbasti LPG bottling plant in the eighties was followed by the 'bursting of kerosene stoves' tragedy in Kota in the nineties. For those who may not remember the earlier two tragedies, here's a bit of background: at the IOC depot in Kota, petrol got mixed in kerosene and no one noticed. Even if someone noticed it, instead of upgrading the product mix to petrol in the prescribed ratio, he downgraded it to kerosene.

Many innocent users of kerosene stoves were killed or injured due to the blasts that occurred immediately upon lighting the stoves that were supposed to use kerosene as fuel but had large traces of petrol in it. All this had happened due to negligence.

What had happened at IOC's Shakurbasti plant was equally shocking. A major LPG bottling plant in the heart of West Delhi caught fire. It was alleged at the time that the fire was caused as precautions were not taken to keep the LPG vapours (that settle at the ground level) away from the source of fire. The real reason is not known; maybe the source of the fire was a casually tossed cigarette butt or some such thing. . . in any event, one thing is sure: safety measures were lax.

I worked with a public sector oil company in India for ten long years. I went in as a management trainee and then left for the private sector. My first posting was at one of the major terminals of the oil PSU and I was aghast to see that often basic safety norms were ignored. Trucks were loaded speedily, without even checking if the vehicles were fit to be loaded. There were few checks on fire extinguishers; and little concern over whether bonding was achieved between the truck and the filling gantry to neutralise the effect of a sudden surge of static.

Most hose pipes, however, were intact, but leaking hoses were certainly not rare to find.

I think it was back in the nineties when there was a fire at a refinery's loading bay area which caught fire when a jeep in the area switched on its engine. A small spark in an area full of inflammable petroleum vapour caused the accident.

Why is there a lack of safety culture?

I found that the indifference towards safety procedures was not for any selfish gain. The main reason was that safety demanded hard work. The blue collar worker in those days was not really given to hard work.

Many workers were undisciplined, often showed up late for work, left their workstations without waiting for their relievers to arrive, believed they needed to work only if they were paid, 'overtime', and negligence was the order of the day. Things don't seem to have changed much even today.

At the LPG plant, the guy who was supposed to write the 'tare weight' on the empty cylinders to ensure that the 'carousel' filled the right quantity of LPG was often missing. The worker supposed to man the 'check scale' was hardly ever there, and the man at the 'compact valve testing machine' kept allowing cylinders on the conveyor to bypass valve tests.

Workers were just not willing to work according to prescribed procedures and the officers turned a blind eye to this, afraid of strikes and backlashes.

The targets from the regional headquarters were always about the number of cylinders filled. And no one really bothered about safety norms. To meet with the targets, safety norms were bypassed.

I remember that an awkward situation once arose at an LPG bottling plant when some of the young officers decided to ensure that all safety procedures were adhered to. The unions resented this and they deliberately slowed down the operations. This led to immediate scarcity of LPG in the market and there was enormous pressure from the 'region' to speed up bottling, 'come what may'!

Yet there were some good souls in the oil industry too, like ONGC chairman Subir Raha who frowned upon the culture of 'safety first but production must' that prevailed then some regions.

Raha, who was with the IOC in the early nineties, always maintained that nothing took precedence over safety. Such voices however were too few to matter too much.

Let's begin at the top

Let us again take the case of the Jaipur accident. I firmly believe that firing the terminal manager or the general manager for the mishap will not solve the problem. And although I have nothing personal against him, I feel IOC chairman Sarthak Behuria should be fired.

A committee set by the petroleum ministry to probe into the causes of the devastating fire has begun its inquiry. The seven-member committee, headed by former chairman and managing director of HPCL M B Lal, will go into the causes behind the fire and suggest holistic safety measures to the ministry.

The Rajasthan State Pollution Control Board too has served a show-cause notice to IOC asking why legal action should not be taken against it over the fire incident.

But will this help? Some oil PSUs' apathy towards safety needs to be dealt with harshly and the action should be severe enough to send shivers up the spine of the next man coming in so that safety is never compromised.

At the oil PSU that I worked, it was common to designate the worst performing officer as the 'safety officer'. It was well known that if you were in the safety department, you were a non-career officer.

This culture must end and it will definitely end with the change of guard right at the top.

The current IOC chief should be sent home because this major fire occurred during his tenure at the helm. He should have ensured that safety audits are done as seriously as marketshare is chased. Large corporates are judged by operational efficiencies and marketshare follows suit.

If the current IOC chief is asked to go, his successor will take safety very seriously. The new man will order exhaustive safety audits of all refineries, all terminals, all depots, all aviation fuel stations, all LPG plants and all petrochemical units.

IOC has over 200 of these units: from Kargil to Kanyakumari, and the new man would know that his focus is 'safety first and foremost'.

The IOC board too needs to be overhauled. For a company which handles 40 per cent of India's petroleum products, it needs a director level executive to head the safety division.

The current position of executive chairman must be done away with. IOC should have a non-executive chairman to whom the director (safety) must directly report on serious safety infringements, bypassing even the MD/CEO.

Let us take safety seriously. Let not the lives of those who died in the Jaipur inferno go in vain. Let there be no more Jaipurs, or Kotas or Shakurbastis again.

The author is based in Lagos, Nigeria, and is the COO of a telecom firm. He has several years' experience in the petroleum industry. The views expressed are personal.