The cost of living in India 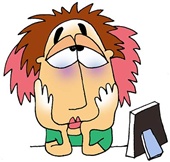 An average Indian is a hassled soul. He has no clue what will hit him hard next-unexpected price rise, heavy rains, power cuts, bus or train strike. Mental peace, stability and a bit of happiness is what he has longed for in his life and has been denied the same, discusses SS Kumar.

A few years back, when my nephew flew in from Toronto for a brief holiday with us in India, the first question he asked me while we were at a mall was, "Why is there no smile on the face of any of the Indians that we see here or on the streets? Why does everyone look so gloomy?"

That set me thinking as to why the life for an average Indian is a real struggle right from morning till evening or even mid night as compared to his counterparts in the west.

My curiosity threw up several reasons as to why an average Indian feels sad, angry and insecure, all through his life.

He gets up early in the morning to check out his international messages on his laptop. Just as the laptop is warming up to say 'you are now connected', the power supply snaps, leaving him bewildered. Is there any prior announcement about this power snap? No. Is there any intimation, whether it will resume in the next 1, 2 or 4 hours. No.

In no other country is a citizen taken so much for granted. What a shame, 63 years after independence, and we still continue to suffer from a power deficit, with no solution in sight. What were our holy planners, architects of the grandiose multiple 5 year plans, doing all this while? One wonders as to why they drew their salaries at all, for all these years, if most of the cities are today suffering from 8 hour long daily power cuts.

Who cares about the small scale industrialist who took a hefty bank loan to get his industry started and is now faced with these power snaps each day?

Thanks to the inadequacy of the government planning, a multi-crore UPS industry has sprouted up in India, whose turnover is a direct reflection of governmental inefficiency and this incompetence is forcibly subsidised for, by the hapless Indian consumer, faced with zero options.

Next, he turns to the newspaper that hits his courtyard around 6 am. If the newspaper reports some thing of a cricket victory by Team India, he feels motivated and upbeat. More often than not, the front page is a chronology of multiple rapes, robberies and murders or betrayal of one minister and his group by another group that was friendly until day before yesterday, or a former chief minister caught having illegally pocketed hundreds of crores of public money, or some other public scam.

He seriously wonders as to why the personal value systems that he follows and forces his wife and children to follow are just not followed by any of the better known figures in politics. Why is loot and cheating more often the norm rather than the exception?

He is also acutely dismayed by the fact that rich people are able to bend the legal rules and get themselves customized judgments. A fellow put in prison on murder charges is able to walk out on parole, enjoy at a night club and then, because of media exposure, quietly slips back to his cell. The common man asks why should there be one set of rules for me and another for the rich and famous, with the CM of the state, bending over backwards to defend an indefensible slip?

Again, the maturity shown by some of our netas (ministers) in making crude statements attacking fellow MPs or MLAs betray the fact that they missed elementary school level education while growing up. And their pettiness of outlook as echoed through their press statements keeps confounding the average reader, day after day, as to why he could not have elected somebody, a trifle more mature.

While a former ineffective prime minister almost proved that India can run by itself without the need for a PM's office, the present MPs and MLAs, with their childish hawkishness, are slowly proving that the country can run without a parliament or local legislative assembly; perhaps, better than at present.

Likewise, a cabinet minister responsible for showing vision and leadership for an important ministry at Delhi is more happy throwing mud at her political foe in Kolkata. If the newspapers report a rail accident once every two days, it is not her worry, but the country's bad luck. Planet Saturn was in the wrong position in India's horoscope!!

Does the word 'accountability' ever echo in the corridors of power at Delhi? What one finds is that in the name of democracy, we have abused all our rights profusely.

While more and more pilots are being sent home, the ones that remain in their jobs are getting more greedy about fleecing the top management for more perks rather than cooperate with them to tide over the present difficult conditions. Why has the word 'logic or reason' disappeared from personal dictionaries? Does this action stem from a basic feeling of insecurity?

Trek to the office and back:

Once the average Indian starts driving to towards office, he is confronted by the same usual traffic mess with the policemen on duty having no clue whatsoever on how to take control. It has been like this for the past 5 years or so, and is getting worse, day by day.

He is the most insecure of his species because he is driving in an arena where no body else other than him, follows the traffic rules. He has the auto rickshaws trying to overtake from the right and left simultaneously, like a bunch of gladiators, making his heart miss a beat. Plus he has these motorcyclists appearing out of nowhere like cockroaches, trying to overtake him by almost hitting and breaking his projecting rear view mirror on the right.

Since there is no police control, every one tries to move forward in a hurry, let the rules be damned. And the generous 'me-first' attitude of everyone results in no vehicle being able to move forward. Added to this agony is the bus driver who thinks it is his fundamental right to park his bus right in the center of the road, at bus stops.

If this is not enough, half way through the drive, there is a loud siren announcing the arrival of a VIP and the entire traffic is brought to a halt. Can't this blessed VIP choose a time when the morning traffic has subsided? No, he is in a big hurry to inaugurate a brand new 20,000 rupee desktop by breaking a coconut!.

And until he breaks the coconut, even the ambulance carrying a near death patient to the hospital will have to wait. Doesn't the patient understand this is Indian style democracy where the MP is omnipotent, even if he is deficit in common sense? Even gods will have to wait in a queue, leave alone patients, who are in serious condition.

Office is a pleasant place so long as he has no dealings with the government:

At least within the precincts of his office, he is a happy soul interacting with his fellow colleagues and those overseas in near total sync. However, when it comes to seeking governmental approvals he is at a total loss to explain to his US counterparts, as to why a simple piece of governmental approval that takes just a day or two in the US should take more than 2 weeks here.

Why is there no minimum performance standards established in government offices, is the thought, that keeps gnawing him from inside.

Being a born optimist, I feel it is all within our reach to set right each of the above problems so long as we are open to new ideas and willing to walk that extra mile. For example, a post office is meant for the service of the people. For office goers to make use of the same, they can start functioning from 07:30  hrs in the morning till 11:30 hrs and later from 4 pm to 8 pm. If the bus driver obstructs the traffic, the roads can be redesigned so that the bus stop and the stopping bus are in a rectangular recess and the rest of the traffic is not blocked. Long term, do we need the traffic blocking autos at all on the roads with their slow speeds. If not, why don't we start planning to phase them out in the next 2 years?

The average Indian is a hassled soul because no body has taken him seriously so far except perhaps at election time. He is hassled because he never knows what is going to hit him hard next -- unexpected price increases, heavy rains, power cuts, bus or trains on strike. Mental peace, stability and a bit of happiness is what he has longed for in his life and has been denied the same

He epitomizes the perennial underdog with unlimited patience and unshakeable faith in his favourite god, even if the god is able to do precious little, against the Indian bureaucracy!

Jadeja looks to cement his place in Team India