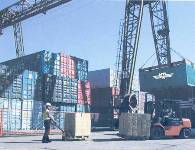 Eliminating more than 250 market-access barriers is one of the most challenging tasks, says Biswajit Dhar.

The formalisation of Asean-India Free Trade Agreement (AIFTA) covering the goods sector marks an important step towards India's deepening trade links with its partners in the Asian region. Viewed as the cornerstone of India's 'look east' policy, this free trade agreement (FTA) would help the two partners unlock the tremendous growth potential that their closer economic integration could bring.

The AIFTA, which will be implemented from January 1, 2010, has been a long time coming. The negotiation process for the FTA was initiated in 2003 as a part of the Framework Agreement on Comprehensive Economic Cooperation between India and Asean, through the establishment of an India-Asean Regional Trade and Investment Area (RTIA).

The RTIA was to be realised through progressive elimination of tariffs and non-tariff barriers in goods and progressive liberalisation of trade in services. The negotiations were initiated with rather ambitious timelines: The deal on trade in goods was scheduled to be concluded by June 2005, while the services negotiations were to be completed by 2007.

It must be noted here that the decision to engage with Asean for formalising an FTA marked a significant departure from our erstwhile position on bilateral agreements. Until then, India was wedded to the multilateral trading system. The only aberrations were bilateral deals with immediate neighbours in South Asia.

This preference for the multilateral trading system was aptly reflected in a discussion paper on regional trading arrangements (RTAs) that India tabled at Doha in 2003. In the period since, India has initiated negotiations for many comprehensive economic cooperation agreements, including the critical one with the EU.

In terms of its structure, the AIFTA is an example of one of the more complex FTAs that has been negotiated in recent years. In fact, the AIFTA is more in the nature of an umbrella agreement that seeks to operationalise the bilateral tariff arrangements that India has agreed to with each of the 10 Asean members. When fully functional, the FTA will eliminate tariffs, in a phased manner, on 80 per cent of all trade between India and Asean.

Under the Normal Track, which has two sub-components, tariff elimination on identified products involving India and five ASEAN members - Brunei Darussalam, Indonesia, Malaysia, Singapore and Thailand - would be completed between 2013 and 2016. For the remaining countries - the Philippines, Cambodia, Lao PDR, Myanmar and Viet Nam - tariff elimination under Normal Track would be completed over several years.

While India and the Philippines would mutually eliminate tariffs by 2019, Cambodia, Lao PDR, Myanmar and Viet Nam would eliminate their tariffs on the products identified by 2021.

Tariffs on five products, viz. crude palm oil, refined palm oil, coffee, black tea and pepper, which have been in the vortex of much of the opposition to the AIFTA, particularly from Kerala, have been included in the category of Special Products.

Tariffs on these products would be reduced by one-half from the level prevailing in 2008 by 2019 with the exception of pepper, which would see the level of tariff protection come down by around 27 per cent during the same period. In the two remaining categories of products, tariffs would not be eliminated, and in the Exclusion List, there is a commitment to annually review the tariffs with a "view to improving market access".

Apart from the complex tariff-reduction approach, the AIFTA also comes with provisions relating to "rules of origin", which would try to ensure that the products that are "substantially" produced in countries other than those included in the Agreement do not get the benefit of the preferential tariff rates.

What prospects does the AIFTA hold for improving the trade links between the two partners? One view is that the Agreement was important when it was conceived in 2003 since the import tariff levels were much higher then. But in the intervening period, both India and Asean have unilaterally reduced their import tariffs.

The contrasting view is that the AIFTA brings with it the political intent of the two partners to engage in a process of deepening their economic ties, which should augur well for the future. This is particularly important since the share of India's trade with its partners in the Asean region has remained nearly stagnant between 2002-03 and 2008-09, which coincides with the phase when the country's total trade increased more than four-fold. But, possibly the most significant contribution of the AIFTA would be to speed up the negotiations on services and investment, areas which are crucial for both India and Asean.

However, it must be emphasised that the FTA will not yield all potential gains unless India does the necessary homework to exploit the markets in a region that has the potential of rapid economic expansion. Recent predictions from the IMF indicate that the Asean-5, viz. Indonesia, Malaysia, the Philippines, Thailand and Viet Nam, would be able to turn around completely by 2010.

There is no gainsaying that opportunities that the Asean region would offer in the months ahead can only be harvested if industry and government work in unison. While the former needs to get into 'project mode', identifying sectors in which domestic stakeholders can take advantage of the tariff cuts, the latter needs to work on the plethora of trade-facilitation issues that need urgent attention.

A crucial area in which the government and the industry would have to work together is to overcome the "behind-the-border measures" that are proving to be formidable market-access barriers in many countries. The existence of these barriers implies that elimination of import tariffs is but a small step towards ensuring larger market access.

Of these, non-tariff barriers, which often take the form of technical barriers to trade and food safety measures, have increased quite rapidly in many of the advanced, developing countries.

The Asean region is no exception: WTO data shows that in the past couple of years, Asean members have submitted more than 250 notifications, indicating use of such barriers. This is where India should now engage its Asean partners so as to ensure effective market access in these markets.

(The author is Director General, Research and Information System for Developing Countries.)