No protests over reforms policies! Hmmm. . . 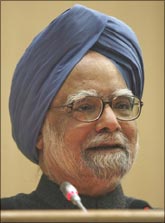 If you're looking for the dog that did not bark, look no further than the (lack of) response to the government's recent economic policy pronouncements.

Two weeks ago, the home minister announced the Cabinet's decision to list on the stock market all qualifying (e.g. profitable) state-owned companies, with a minimum float of 10 per cent. Already listed companies with a smaller float would take up their public stake to 10 per cent.

This is the single largest disinvestment decision that any government has taken so far, and could generate up to 2 per cent of GDP. Was there any political protest, any rallies by dissenting employees? Nyet. Even Prakash Karat kept mum.

A week later, the prime minister told the World Economic Forum's Indian economic 'summit' that he would push financial sector reforms, encourage the growth of futures trading, and the like. The message was clear, that he was going to push the reforms agenda.

Meanwhile, the human resource development minister wants to allow foreign universities access to the Indian market -- another thorny subject that his predecessors skirted. Again, there is no protest.

It would seem that the government can announce almost anything it wants, without exciting any opposition. That is a sea change.

Indeed, even after the Left joined the ranks of the opposition in the summer of 2008, Manmohan Singh did not use the opportunity to renew his reformist credentials. He is getting into the act only now.

It could be that the BJP, as the principal opposition party, is so busy with its internal bickering that it has no time to play its role as the opposition. It could even be that the BJP has no problem with what the government has announced so far; it might have done the same things.

The Left, similarly, is frozen by the dreadful prospect of losing West Bengal to Mamata Banerjee in 2011, and can think of little else. The other parties don't particularly care, one way or the other -- except when it comes to specific issues that provoke heightened local sensitivities (like land acquisition for industry).

'Reform' issues of the kind that have dominated Indian economic "summits" over the years have become passé in quite another way -- the latest WEF meeting, for instance, saw almost no mention of labour laws as being archaic.

The only 'exit' policy discussed was with relation to the withdrawal of the government's fiscal stimuli, and there was barely a mention of the sector-wise restrictions on foreign ownership -- yet another standard issue that has been routinely flogged in business meetings.

Instead, what those attending the summit chose to dwell on this year, when Montek Singh Ahluwalia was up on stage, was governance, corruption, bureaucratic impedance, leakages in government programmes, the improvement of skill levels -- all the basic issues that are of concern to everyone, not just the "reform"-minded.

If economic reform is no longer a political hot potato, that is something to be celebrated. It is, of course, possible that opposition will build up when specific steps are taken (public sector employees prefer to remain that, and suspect that every case of disinvestment takes them one step closer to privatisation), but such protests have a limited life.

Also, Mr Karat might re-discover his vocal chords, and the BJP might decide yet again that it has to play the nationalist card for all it is worth. Somehow, though, it feels as if the country has moved on.

The government should be in step, then, and take all the reform measures that it wants to without being scared of its own shadow.

BJP row: Reddy faction blinks but no solution yet

Truce in K'taka BJP: Will it be short-lived?