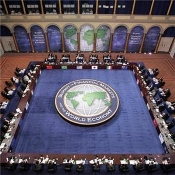 At the Pittsburgh Summit on September 24-25, 2009, the leaders determined that the G-20 will replace the G-8 as the "permanent council for international economic cooperation".

A new global oligarchy is coming into being and India is a part of this charmed circle.

We are chuffed about the invitation to sit at the high table. In Washington next week, President Obama will ensure that this feeling of having arrived is further reinforced. But watch out, this membership of an exclusive club carries a price tag!

The need for a committee of direction that can guide the international institutions that manage trade, finance, development assistance, environment, health and so on is widely recognised.

Global governance tracts have advanced proposals for an Economic Security Council elected by UN members or a representative Group of 20 (plus/minus) countries. These proposals involve rotating membership, participation by smaller countries through representatives, and procedures for ensuring accountability.

The expansion of a self-selected Group of Eight (G-8) to a Group of 20 (G-20) selected by them is not quite what reformers have sought, and it does not constitute an advance in global democracy.

It only reinforces an oligarchic system by socialising and incorporating potential challengers. There is an entry price to the club. The new members can no longer project themselves as victims in an unjust world. They will now be asked to temper their nationalist positions on trade, technology, finance, environment and health to accommodate western interests and global concerns.

The rules and institutions that today govern the global economy have been shaped by the North Atlantic cabal of the US and the major European powers ever since the Great Depression of the 1930s taught them the virtues of oligarchic cooperation.

The G-20 has emerged to accommodate threats to this hegemony from new centres of economic power outside, particularly in Asia. The first such threat was the big oil price hike at the end of 1973. But the oil weapon was blunted readily because the Saudis and other oil producers depended on the US for security and financial services. In fact, petrodollars reinforced the power of the West.

The next was the emergence of a rapidly growing Japan that threatened the high-tech industries of the West. This was managed with the Plaza Accord of 1985, which led to a large devaluation of the dollar vis-à-vis the yen. At that time this event was projected as the arrival of Japan on the world stage, playing a key role in the management of the global economy.

In practice, the Accord rescued the US economy but led, after just a few years, to the stagnation and slow growth that have bedevilled Japan for the past two decades. That is the price Japan paid for its membership of the global high command.

Now it is China's turn to be wooed with all the talk about a G-2 power structure. Will it also be soft-talked into a large revaluation that undermines the export production that is, and will remain for some time, the foundation of its high growth path?

Unlike Saudi Arabia and Japan, China owes the US no favours. It has stoutly resisted revaluation pressures so far and a repetition of the Plaza Accord gambit seems unlikely. But keep watching this space!

The membership fee demanded from India will not be as steep. But it will not be negligible - perhaps something in the context of the climate negotiations and further instalments for burden sharing in Afghanistan and Africa.

Western dominance over the G-20 agenda will be reinforced by talk of rivalries among the newcomers on the standard principle of divide and rule. The most discussed rivalry is that between China and India. This cannot be wished away.

China will become more assertive - partly to ensure raw material and energy security and partly to feed the nationalist urges of a self-confident, prosperous, well-educated and young urban class - and deflect demands for greater democracy.

As far as India is concerned, the main area of contention will be in South Asia. But in other areas, a more assertive China could be an opportunity for cooperation which can coexist with contention.

China and India will compete for oil concessions in West and Central Asia. But they have a shared interest in helping to ensure stability in the supply areas and security in the supply routes. Nor do their fundamental interests diverge in Africa.

In both areas, China and India have to compete with each other and, at the same time, muscle in on the territory that the West has considered its imperial preserve so far. The latter task provides the space for cooperation. For instance, they must demand that the Middle East quartet that deals with the Israel-Palestine problem become a sextet.

In many other areas of global power play, China and India can join forces to gate-crash into privileged decision-making processes, whether they deal with the global economy or environment or security. For starters, they must ensure the end of the US/Europe monopoly on the Fund/Bank leadership and start demanding influential positions at the top in these two institutions, in the WTO and key UN agencies.

Among the other new diners at the high table, Brazil, with its recently discovered oil wealth and political clout, South Africa, the sole representative of Africa, and Indonesia could be crucial allies in challenging the old guard. But the remaining seven newcomers - Argentina, Mexico, Turkey, South Korea, Australia, Saudi Arabia and the European Union - are unlikely to join in any subversion of the status quo.

India, of course, has to take its seat at the global high table; but in doing so, it must prepare itself for defending its interests in a new type of forum. The real action in the G-20 process will not take place at the photo-op summits but in the preparatory ministerial meetings and in the gatherings of the Sherpas.

The native skills of our diplomats will take care of the Sherpa process, but the sectoral ministerial processes will require stronger coordination, which can only be provided by the Prime Minister's Office. Will powerful finance, commerce and external affairs ministers accept this?

There is less commonality of interest in the G-20 than in the G-8. So join the board but do not let the incumbent management take you for a ride.