November 19, 2009 12:38 IST
The conversion of Indian farmers from traditional varieties and public hybrids to commercial hybrids and GM seeds could create a market larger than China, notes Bhavdeep Kang . 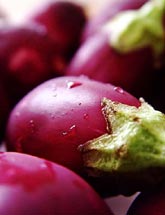 A fortnight ago, the Bharatiya Janata Party headquarters in Delhi received a visit from a representative of a US-based multinational seed subsidiary. His mission: To convince party opinion-makers that Bt brinjal was as swadeshi as baingan ka bharta and should therefore receive their endorsement.

That American agri-companies have intensified lobbying with Indian political parties is not surprising, for two reasons. First, the Indian government has yet to greenlight the commercialisation of Bt brinjal -- crucial for the future of these 'Bt brand' companies -- even after a thumbs up from the Genetic Engineering Approval Committee (GEAC).

Also, the winter session of Parliament is to take up two crucial pieces of legislation: The Seed Bill and the National Biotechnology Regulatory Authority Bill. Both will profoundly impact the agri-business environment in India for agri-MNCs, by facilitating market access.

Small wonder US Secretary of State Hillary Clinton made it a point to visit the Indian Agricultural Research Institute in July and reiterate her country's commitment to bringing about policy changes in the Indian farm sector that US agri-business would like to see.

Clinton said she favoured a strong intellectual property or patent regime (IPR) to safeguard the ownership of agricultural research, as that would be in 'everyone's interest'. A contention rejected by Indian agri-policy analysts who say it would primarily benefit owners of biotechnology research -- the MNCs who produce 'Bt' seeds, as genetically modified or GM crops have come to be popularly known (patents would ensure that no one else would be allowed to produce or sell these seeds).

Her technology advisor, Nina Federoff, is a strong votary of genetically modified crops, to the extent of being regarded as a spokesperson for US seed multinationals like Monsanto, Dow and DuPont.

In fact, Federoff triumphantly pointed out to a group of US agri-scientists last year that although Europe and Japan were cautious about GM foods, Africa and India were clamouring for them!

The MNCs have the advantage of an unabashedly pro-GM Minister for Agriculture in Sharad Pawar. However, the Bt ball is currently in the court of Environment Minister Jairam Ramesh, who is under pressure from the public and the scientific community to delay unleashing the Bt blitzkrieg until a consumer protection regime is in place.

The BJP is divided on the issue and its opposition could delay the passage or alter the shape of the pending Bills. The Rashtriya Swayamsewak Sangh, its mentor, has made no secret of its strong opposition to GM crops.

Prime Minister Manmohan Singh provided the US-based agri-giants with a readymade vehicle for lobbying with Indian policy-makers during his first term in 2006, when he approved the Indo-US Knowledge Initiative on Agriculture.

It was announced with much fanfare during his visit to the USA and evoked a storm of protest at home, mainly from the Left parties and farmers' bodies.

The AKI, as it is known, boasts MNCs (Monsanto, Walmart, Archer Daniels Midland) as official US representatives on its panel. They have set the agenda for the AKI, with development of transgenic strains of rice and wheat forming a major part of the initiative.

Three-quarters of the Rs 400 crore (Rs 4 billion) commitment by India is earmarked for biotechnology products (the US commitment of $8 million for the year 2006 didn't materialise, prompting Pawar to write to the prime minister, seeking his intervention).

A subsequent attempt was made by the US to alter the focus of the AKI from research to policy issues but was scuttled by the Indian bureaucracy.

The AKI was touted as the next logical step in the '50 years of Indo-US cooperation on agriculture' which started with the Green Revolution that opened the doors to US agro-chemical and seed companies. It is part of the much-hyped 'Second Green Revolution', touted by the PM and his agriculture minister as the answer to India's food security concerns.

The fact that this 'revolution' will be based on bio-technology products owned by private corporations had disturbed Indian farmers' bodies, who have described it as a joint US-India effort to promote the interests of bio-technology-driven MNCs.

The AKI worries Indian agri-policy experts because it gives the MNCs access to India's gene-banks, fuelling fears of bio-piracy. Even more, it also gives them an 'in' to India's enormous agricultural research infrastructure, while the ownership of the collaborative research is not yet clear.

Since they have a clear edge in terms of bio-technology research and are pumping out patented Bt seeds, the MNCs want an IPR regime which would give them a hold on the Indian seed market.

The US already has a significant presence in India's agricultural and food sectors, accounting for more than half of the $1 billion organised seed market. Of course, four-fifths of India's farmers do not purchase seeds. They still follow the traditional system of save, exchange and barter. It is this section that the MNCs would like to target.

The conversion of Indian farmers from traditional varieties and public hybrids to commercial hybrids and GM seeds could create a market larger than China. The Seed Bill, 2004, and the National Biotechnology Regulatory Authority Bill are the thin end of the wedge.

The NBRA Bill, if it becomes an Act, would demolish a raft of existing bio-safety regulations, which would enable easier access to the Indian markets.

The Seed Bill has been criticised for diluting many provisions of the existing Protection of Plant Varieties and Farmers' Rights Act, PPVFR, which safeguards the right of Indian farmers to freely save, exchange and barter seeds.