News
Business
Movies
Sports
Cricket
Get Ahead
Money Tips
Shopping
Sign in  |  Create a Rediffmail account
Rediff.com  » Business » Of Naxals and rich land of the poor

Of Naxals and rich land of the poor

India's mineral-rich areas have the largest number of poor and are Naxal-affected -- there's an obvious story here, says Sunita Narain. 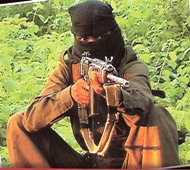 Take a map of India. Now mark the districts of the country in terms of forest wealth. Then overlay on them the water wealth of the country -- the sources of streams and rivers that feed us.

On this, plot the mineral wealth of the country --  iron ore, coal, bauxite and all things nice that make economies rich. But don't stop here. Mark on these wealth of India, another indicator -- districts where the poorest people of our country live. These are also the tribal districts of India.

A picture will emerge: The richest lands of India are where the poorest people live. Now complete this cartography of the country with the colour red.

These are the same districts where Naxalites roam; where government admittedly is fighting a battle with its own people, who use the gun to terrorise and kill. Clearly, there is a lesson of bad development that we need to learn from.

Let's join these dots with events of these last few weeks. Madhu Koda was the chief minister of Jharkhand -- a mineral- and forest-rich but people-poor state -- for just about a year.

Today, enforcement agencies are unearthing the mother of all scams involving Rs 4,000 crore (Rs 40 billion), or even more, the illegal assets that he and his associates looted from the state.

Just consider, this is roughly a fifth of the annual budget of the state. But more importantly, this enormous wealth came from the same minerals that have never made his people rich.

It does not end there. In the past one month, when the BJP government in Karnataka was brought to its knees by defiant legislators, who wanted the head of the chief minister to roll, we did not connect this episode with the cartography of India.

The Reddy brothers -- Gali Janardhan Reddy, the tourism minister and his brother Gali Karunakara Reddy, the revenue minister in the BS Yeddyurappa government -- are mining barons.

Their wealth and power come from the rapacious mining in the same 'rich but poor' districts of Karnataka and Andhra Pradesh.

The Reddy brothers' fiefdom, Bellary district, contributes some 20 per cent of the country's iron ore production. This ore is mined with little or no consideration for environmental safeguards -- water in the region runs red because of mine discharge, land is destroyed, forest is illegally mined and people's livelihood devastated.

This is the district with the largest number of registered private aircraft, but is ranked third from the bottom in the human development index of Karnataka and has 50 per cent literacy level -- a shame for the otherwise progressive state.

The Reddy brothers (like Madhu Koda) are products of the extraordinary wealth of the regions which we still call poor. Why, then, are we surprised when Naxalites profit from the anger of the local people caused by this loot of their region?

Take the forests. Some 60 per cent of the country's dense, most biodiverse and economically-rich forests are found in these tribal districts. This is where the magnificent tigers are found. Ask again: If there is extraordinary wealth, then why are the people living there so poor?

The fact is that we have never built a development model for natural resources, which is both sustainable and can benefit local economies as well as people.

The first phase of development took place when the state extracted and exploited the forests.

Large areas (much like what is happening with minerals today) were handed over to paper and pulp industry; swathes of dense forests were cut, land was denuded to build the economic wealth of the country.

But nothing was shared with the local people. This was the forest wealth that built fortunes of governments and private companies. But not of its people.

Then came the period of conservation. The nation decided that forests had to be protected; tigers and other wild animals had to be safeguarded.

But instead of building an economic model, which would have shared the benefits of conservation with the people, we once again marginalised the locals.

We believed that forests had to be protected from the people who lived on these lands.

Today, the callous implementation of the Forest Conservation Act, which does not allow (rightly in many cases) the diversion of forest land for non-forest purposes, has become the single biggest reason for anger and violence in the region.

The problem is that while clearance is given for mining, power or industrial projects in vast swathes of forest land, what is delayed and discounted is the little forest land needed by the local people to build a school, a water tank or an access road. Worse, the wealth of forests is never used to build their economies.

Conservation of the tiger happens on their lands, with little benefit to them. Are we, then, still surprised by their anger?

This is what needs to change. And there are opportunities. Some years ago, the Supreme Court passed an important order regarding the sharing of the mineral wealth with its people.

Today, there is the issue of protecting these forests for national and global imperatives -- from water to climate security. Can we use these to build new futures? Can we change the rich land-poor people cartography of India? Let's discuss this next fortnight.

Will the route of Koda's loot be dealt with?