Exports continue to plunge, but...

The trade numbers for August 2009, released by the ministry of commerce and industry last week, indicate that the declining trend is far from over, although the negative momentum may be slowing a bit. 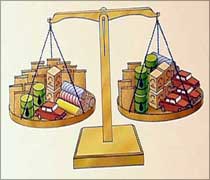 Exports in August showed a year-on-year drop of 19.4 per cent in dollar terms, somewhat better than the 30 per cent decrease seen during the April-August period, but still reflecting a sluggish global market as also lower commodity prices compared to a year earlier (when they were at their peak).

This pattern will persist until September, after which a significant base effect will kick in and the year-on-year growth rates will climb to near-zero levels. It is only in 2010, when the US and Europe are expected to return to positive GDP growth rates, that the export numbers will turn respectable.

Even then, it will take some time for volumes to return to the very buoyant levels that were seen during the first half of 2008-09, before the decline began last October. For exporters, this means continuing financial pressures and an inevitable process of consolidation as stronger firms edge weaker ones out.

From a balance of payments (BoP) perspective, however, the continuing decline in exports is not particularly threatening, because imports have been declining even faster than exports.

During August, overall imports fell by 32.4 per cent year-on-year, in dollar terms, a shade below the 33.4 per cent decline seen during the April-August period. Oil imports declined by over 45 per cent in August, mostly reflecting lower prices when compared to August 2008.

As with exports, the base effect will take growth rates to near-zero levels over the next few months, but the trade deficit has actually been narrowing during this period, helping to keep the current account deficit within manageable limits even as the economy has slowed down.

Meanwhile, the first quarter (April-June) BoP data released last week by the Reserve Bank of India show that capital inflows are now back to a level at which they completely offset the current account deficit.

The capital surplus during the quarter was estimated at $5.9 billion, a shade above the current account deficit of $5.8 billion. With the momentum of capital inflows apparently picking up in the face of a relatively small and stable current account deficit, there are signs of reversion to the 2004-2007 situation, in which the management of the foreign exchange surplus became a policy challenge.

Of course, given the state of the economy, the pressure today is not comparable. But when the RBI is already talking of inflation risks, the last thing it would want is to deal with another surge of foreign exchange inflows. The debate on a structural solution to this problem needs to be revived.
Business Standard
Source:

Their wealth exceeds GDP of 140 nations!