A cure for India's traffic mess 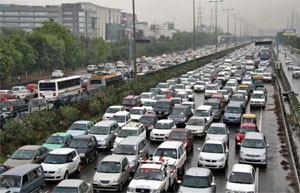 There is an urgent need for better infrastrcutrue, proper traffic management and smarter planning, if Indian roads are to be safe and good to drive on, says S S Kumar.

When I was in school, the most common quiz doing the rounds was: 'Which is the only jam which you cannot spread on a loaf of bread?' After the quizzed person looked blank for a while, the quiz master would proudly proclaim, 'The traffic jam, dummy!' Light hearted as it might seem, the irony is that nobody today is in a position to claim, 'Honey, I shrunk the traffic' and help us breathe easy.

For a myriad of reasons, city traffic all over India is in a terrible mess. Let us analyse some of the key reasons and some possible solutions to ease the problem:

In the sixties, the total production of cars of the three venerable brands -- Ambassador, Fiat and Herald -- was estimated to be below 30,000 per year. Today, over 30,000 new vehicles get added to each of the major cities every month!

The roads were earlier created to handle traffic of say, 3,000-4,000 vehicles in a city, but today the influx of new cars in most cities far exceeds that.

Most city administrators are taking the initiative of creating new office zones. There was a time when, every company in Mumbai thought it below its dignity to be located anywhere away from Nariman Point or Churchgate (business districts in South Mumbai).

Today they are willing to operate from Andheri or Malad, suburbs on the western fringes of the city. This should be encouraged as it minimises traffic across the city, thus reducing the strain on the meagre infrastructure.

The concept of 'zoning' is increasingly gaining popularity among city planners. Zoning implies setting up of zones -- complete with offices, schools and malls/markets -- all in the same defined area.  Gurgaon exemplifies the concept of excellent town planning with all offices on one side of a broad road and residential apartments on the other.

The trend to allow employees, especially in the IT sector, to work from home has already begun. If traffic growth remains unabated, most companies will have no other option but to follow this pattern on a more regular basis. This will not only ease real estate pressures, but will also bring down traffic and allow people using public transport to travel in relative ease.

To avoid further chaos in the next three to five years, we need to plan early and be ready for our future needs. We need to plan for, minimum, 6-channel roads either way along with smaller auxiliary road, as the 7th channel.  This should also leave space for sideways expansion at a later date, when required.  The smaller auxiliary road should handle all the slow moving traffic like auto rickshaws, cycle rickshaws, motorcycles, bicycles, and handcarts.

This concept followed in Delhi at present is welcome and needs to be encouraged. If this smaller road is made bi-directional, there is no need for a cyclist to cross the broader road. Flyovers and under-passes can make the task of crossing the roads a lot more safe.It is time, we did something about segregating high and low speed traffic. Slow moving vehicles have no business getting on to high speed roads and add to the misery of people in a hurry.

Disciplined driving is a must

As Union Home Minister P Chidambaram recently pointed out, honesty and discipline just seem to be missing from our lives. When a police van jumps a red traffic signal, what discipline can we expect from ordinary drivers? The only solution for this is to install cameras at all important junctions and impose heavy fines on those caught violating traffic laws on camera, no matter how important these people might be.

In most countries, if a person collects up to 4 adverse remarks on his licence, say, within a certain period, his licence is immediately cancelled.

For taxi and auto drivers, laws are stricter, where licences are cancelled for the next 6 years, with no chance for appeal.

I would appeal to the government to implement this and overnight, traffic discipline would improve. Licences to ply are also cancelled, for instance in Singapore, if the taxi driver deliberately takes you by a longer route or plainly refuses to accept you as a passenger. I wish at least one state in India would have the courage to kick-start this rule..

In Indis it's not just the drivers who have inadequate skills, even the policemen manning important intersections have insufficient knowledge about traffic rules. Thus, even the most pathetic driver gets away with the most flagrant traffic violation joepardising not only his own safety but also that of the other motorists and pedestrians.

To put an end to this mayhem, each state should have a traffic police training academy, where experts from other countries can be invited to give the necessary training.

It's time Indians learned the art of 'lane driving'.

The government must ensure that the driver training schools are authentic. Most of these schools take a stipulated fee with the promise to 'buy' you a driving licence whether you pass or fail. There are few others who give you a licence even when you have not appeared for the test and don't know the clutch from the brake!

There must be strict tests for individuals who want to operate driving schools where his/her theoretical knowledge must be thoroughly examined.

The government must evolve a scheme by which all bogus driving schools are replaced by carefully selected licensed ones, who are chosen on their merit and not on the amount of bribe paid.

The truth is that a majority of drivers are anything but conversant with the rules and the auto drivers definitely take the cake. The only way to discipline them is to subject them to driving tests every year and those with too many adverse remarks on their driving licence be barred from driving.

It is the fundamental duty of the government to ensure a safe and healthy driving environment and if the government does not take the initiative, the Supreme Court should intervene.

I have often wondered how some drivers who drive so shoddily on Indian roads, follow every traffic rule the moment they are either in Europe, or the United States or West Asia.

The most obvious reason is that a strict vigilance and punishment system is prevalent in those places. Here it is the sab chalta hai raj.

I would like others to share their opinions so that a consensus and a time-bound action plan is derived and the concerned ministry, whether at the Centre or at the state level, is forced to take necessary fresh initiatives quickly to stem the rot, before it reaches a point of no return.