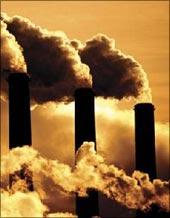 With a new United Nations climate treaty due to be discussed in Copenhagen in December, the developed world and the emerging economies are trying to bridge their differences on how to curb greenhouse gas emissions that cause global warming.

The United States wants developing countries like India and China to agree to control the emissions being produced by their rapidly galloping economies by setting specific targets.

India argues that this would hurt its economic growth and wants the industrialised world to curb its pollution as well as fund new technologies in the developing world by underlining that it has one of lowest emissions per capita in the world.

Even as both agree on the need for an agreement at Copenhagen, India has made it clear that it cannot accept legally binding limits on carbon emissions.

Although around 80 per cent of world growth in carbon emissions is coming from fast growing economies like India and China, India has argued that even if India's economy continues to grow at current levels for the next decade or two, its per capita emissions would still be below those of the developed countries.

A recent bill passed by the US House of Representatives seeks to impose tariffs on products from countries that do not undertake emission-cuts targets. This has elicited a strong negative reaction in India which views such tactics as non-tariff barriers.

This is largely viewed as a protectionist measure imposed by the developed world to shield its businesses from the costs of its own national emissions targets.

One of the major stumbling blocks in global negotiations on climate change has been the reluctance of the developed world to make adequate transfers of finance and enabling technology to the developing world.

India is seeking a bilateral arrangement with the US on this issue with an understanding that this can serve as a model for an agreement between the developed and developing world at Copenhagen.

A number of obstacles remain to be overcome before the crucial climate change negotiations at Copenhagen in December. The US, under the present Administration, has also made a commitment to cut its greenhouse gas emissions by 80 per cent by 2050 compared with 1990.

Japan's new Prime Minister, Yukio Hatoyama, also stated that his country will reduce emissions by 25 per cent by 2020. As a consequence the emerging economies are now under increasing pressure to demonstrate their commitments to tackle climate change even as they continue with their efforts to reduce poverty.

It became an iconic image of India's defiance on the issue of climate change when during the US Secretary of State Hillary Clinton's visit to India in July, India's Environment Minister Jairam Ramesh publicly asserted: "India's position is clear and categorical that we are simply not in a position to take any legally binding emissions reduction."

As the global climate change negotiations to be held in Copenhagen in December have come nearer, there has been growing pressure from the developed world on states like China and India to accept quantifiable targets to reduce greenhouse gas emissions.

It now seems, however, that India is gradually changing its position also exemplified by Ramesh's remarks  at the recently held high-level climate change summit at the UN headquarters in New York. He suggested that India "cannot hide behind any excuses and we [Indians] have to be aggressively taking on voluntary mitigation outcomes."

While accepting binding targets internationally still remains out of question, India is now underlining that it is important for it to take on national commitments so as to enhance its global credibility.

This change of heart is a result of two inter-related factors. One is the evolving Chinese response on climate change. China has declared that it is pursuing its national climate change programme that includes mandatory targets for reducing energy intensity and discharge of major pollutants as well as increasing forest coverage and share of renewable energy during the time period of 2005-2010.

India was caught unawares by the specific measures that China announced at the UN General Assembly recently and is now planning to follow suit. Toward this end, India plans to conduct regular dialogue with China to exchange views on their respective action plans on climate change.

The other factor driving India's new approach to climate change negotiations is a sense among Indian strategic elite that a rising India should engage the world on its own terms and with a degree of confidence that befits its stature as a rising power in the international system.

In tune with this assessment, India agreed at the Major Economies Forum meeting in Italy about two months back that all countries would work to reduce emissions in order to not let global temperatures rise more than 2 degrees above pre-industrialisation level.

Critics argue that this will restrict India's diplomatic space in the Copenhagen Summit. Yet India hopes that such steps will help it in overcoming its traditional image of a deal-breaker in global negotiations. India has committed itself to a mandatory fuel efficiency cap to begin in 2011, a change in its energy matrix whereby renewable sources will account for 20 per cent of India's power usage by 2020 as well as announced an ambitious solar energy plan.

India does not want to be seen as a spoiler in the climate change negotiations and would like to bolster its image as a responsible global actor ready to offer constructive help in mitigating global problems rather than being a persistent nay-sayer.

Despite this it is far from clear if the climate change negotiations will succeed as the developing countries want to be supported financially and through technology sharing with the rich industrialized world. That commitment has not been forthcoming so far.

Without any financial and technological assistance, states like India will not be willing to open their efforts at greenhouse emissions reductions to international verification. Climate change talks not only involve competing economic interests but also raise matters of broad principle for the West's relationship with developing nations.

India has shown itself ready to lead coalitions of developing nations in the past, vetoing those global agreements they see as discriminatory. The issue of the West's 'historical responsibility' for atmospheric pollution is being case in similar terms and Indian agreement will be hard to secure.

Yet the fact that India has started to gradually change its approach towards one of the biggest challenges facing the international community portends well for the future.

The author teaches at King's College London and is presently a visiting professor at IIM Bangalore.