Of climate change and constructing a winning narrative 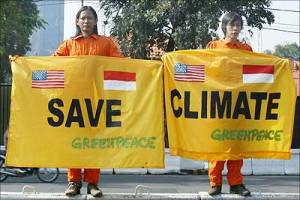 With less than two months to go for the climate-change summit in Copenhagen, India has resolved to re-brand itself as a deal-maker, says Pallavi Aiyar.

India has spent the better part of the last decade circling around the issue of climate change like a wary pugilist, assessing a foe. Despite a sound moral and economic case for its stance on the issue the country's articulation of its position has kept it on the back foot.

Hundreds of millions of Indians still lack access to electricity. The country's per capita carbon emissions at just over one tonne are a tenth of the European Union's and a twentieth those of the US. Not only have the rich countries been by far the major contributors to climate change, they have done relatively little about it despite being aware of the increasingly damning scientific data that links green house gas emissions to global warming.

The US, given its abysmal track record on the issue, has not escaped its share of criticism. But the European Union which has nailed its colours firmly to the mast of climate change has been able to project itself as the enlightened leader of the world when it comes to the environment.

The mission of leading and delivering the planet from the perils of climate change is very much integral to both how Europe perceives itself and would like to be perceived by the rest of the world.

That Europe has done more than the US by most environmental benchmarks is true, although not all the member states of the Union have an equal track record. The EU is also the first player in the ongoing multilateral negotiations to have put a figure forward for financial assistance for climate change mitigation and adaptation for developing countries.

Yet both policy makers and ordinary citizens in the EU seem genuinely unaware and almost impatient with the fundamental inequality that is embedded in the climate change discourse of the day.

For an Indian reporter making her way to the regular press conferences the EU holds to trumpet its leading efforts to combat climate change, this inequality is a physical, inescapable presence.

En route to the Schuman area which is home to the EU institutions, she passes gigantic five-storey maison de maitre, Brussels'-style town houses with four metre-high roofs. The houses are centrally heated for the long winter, inviting to the wind-blown passerby. The cars she passes are huge, family cars; many are seven-seaters. The same EU officials who lecture her on India's lack of vision on climate change drive these cars and even recommend them to her as 'convenient'.

Being used as she is to a capital city back home where every summer when temperatures soar to well over 40 degrees centigrade, load-shedding remains a fact of life and most people make their long daily, sweat-soaked commutes in jam-packed buses, the righteousness with which European officials lecture the world on their irresponsible environmental behaviour understandably grates.

And yet this same inequality remains opaque to Europe, a culture and society that prides itself in valuing equality.

In many ways India has only had itself to blame. It has consistently lost the public relations game, failing to construct winning narratives around the climate change debate. But finally, with less than two months to go before the United Nations negotiations for a successor to the Kyoto protocol take place in Copenhagen, India seems to be making a belated push to re-brand itself.

"India will go the COP 15 negotiations as a deal-maker not a deal-breaker," announced environment minister Jairam Ramesh last week, to an audience consisting of 300-plus editors from countries around the world.

Speaking at a pre-summit, summit organised by Project Syndicate in Copenhagen, Ramesh constructed a new, much-needed narrative, which set the tone for the proceedings that followed over the next day-and-a-half.

Instead of positioning India as the victim, Ramesh's articulation projected India as a responsible world-player. He began by clearly outlining both the limited responsibility India has historically had in creating the problem as well its acute vulnerability to the consequences of climate change.

But instead of merely pointing fingers, he went on to define a new proactive approach that India as a major emerging economy and a moral, responsible member of the community of nations would take.

He defined this approach as a 'per capita plus' one where India would not only adhere to self-imposed per-capita emission constraints -- by committing that it will never exceed the levels attained by developed countries -- but would also take on voluntary mitigation efforts.

These mitigation efforts, he said, would include national standards on fuel efficiency, building codes, renewable energy and so on. He described these as a step beyond nationally appropriate mitigation actions that under the Kyoto protocol were the only obligations of developing countries, calling them NAMOs or nationally accountable mitigation outcomes.

The minister went further, offering to open up India's NAMOs to external audit. So far, India has argued that it is willing to permit international monitoring of climate change mitigation projects funded by overseas finance.

At the Copenhagen summit, Ramesh said India was willing to extend this to even domestically funded projects in the form of a 'national communication,' similar to communications made to the International Monetary Fund every year.

The minister argued for an approach at the COP 15 negotiations that focused on the areas of agreement including adaptation finance for the least developed countries, on aforestation and technology-sharing. "Let's not repeat the mistake of Doha and go for an all or nothing approach," he concluded.

India will now go into the December negotiations with the ball firmly in the court of the developed countries. If, as is overwhelmingly likely, the accord that emerges does focus on limited areas of agreement, leaving the more contentious issues for further discussion, then India will be seen as a key player in having guided the process to a partially successful conclusion.

A change in role, that one can only cheer.

The author is Brussels correspondent for Business Standard