Opening the door to Bt brinjal, a step towards disaster 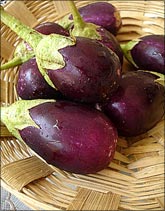 Brinjal, which originated in India, is popular worldwide. In India, it accounts for half a million hectares of land and an output of 8.4 million tonnes. This is the first time a GM food crop has been approved by the GEAC, an ad hoc 30-member committee comprised mainly of bureaucrats and scientists from state institutions, which substitutes itself for a proper regulatory agency.

This momentous decision potentially opens the door to other GM food crops, including rice, maize, soyabean and sorghum (jowar, or the Great Millet) besides directly introducing a genetically engineered vegetable into India's food chain. Environment Minister Jairam Ramesh -- who publicly opposed GM foods only months ago -- says he'll will study the GEAC's report in depth before taking a final decision.

Mr Ramesh would do well to look into the charge by the biologist, Professor P M Bhargava -- the GEAC's only independent expert, appointed by the Supreme Court -- that a majority of the necessary biosafety tests were skipped before the clearance was given. That's itself a strong reason for refusing to approve Bt brinjal.

The transgenic brinjal was developed by Mahyco (Maharashtra Hybrid Seeds Company) in collaboration with the US-based transnational, Monsanto. It involves the insertion of a gene from the soil bacterium Bacillus thuringiensis into the DNA or genetic code of the vegetable to produce pesticidal toxins in every cell.

Theoretically, Bt brinjal cultivation should lead to reduced pesticide use and vegetable wastage, officially claimed at 50 percent-plus, lost to pests such as fruit and shoot borers. But as we see, theory is one thing and GM's reality another. Indeed, the theory is itself open to scientific doubt.

Rational opposition to Bt brinjal doesn't arise from a knee-jerk rejection of genetic engineering, but is based on good science. Sound, established science tells us that we don't know enough about the effects of insertion of alien genes on the recipient organism, about the risk of transfer of those genes to human organ systems or viruses -- and hence about the impact on human and animal health and the environment.

Therefore, we must not allow GM foods to be cultivated commercially. As Harvard geneticist Richard Lewontin puts it: 'We have such a miserably poor understanding of how the organism develops from the DNA that I would be surprised if we don't get one rude shock after another.' Prudence demands that we at least don't create conditions for rude shocks.

A host of studies show that GM crops have adverse effects on animals and humans. Consider some. In 1996, the UK launched more than 50 long-term safety studies on GM foods. A team under Arpad Pusztai of the prestigious Rowett Institute tested GM potatoes engineered to produce an insecticide called GNA lectin by feeding them to rats. The feed adversely affected virtually every organ of young rats, including the brain, liver and testicles. There were signs of 'immune system damage'.

Rats fed non-GM potatoes spiked with the lectin were relatively unaffected even when fed 700 times the amount of the lectin the GM potato produced. The team concluded that the damage was caused by 'the genetic modification process itself'.

Similarly, in another study, rats fed with GM tomatoes developed bleeding stomachs. 'Of the 20 rats, 7 developed stomach lesions; another 7 of 40 died within two weeks...' Again, rats fed with Monsanto's GM maize exhibited 'significant changes in their blood cells, livers and kidneys'. Monsanto challenged the findings with its own 'company study'. But according to expert Gilles-Eric Seralini, 'Monsanto contradicts itself. The first time around, their studies explain that there are "significant effects without a pathological significance", and the second time around, (they) say that the effects observed are no longer significant.'

All 23 subjects experienced itching. Twenty had lesions on their face and hands. Some also appeared on the feet, back, neck, and abdomen. Nineteen showed redness of skin and 13 facial swelling. Eleven had eye symptoms. Nine had nasal discharge and/or excessive sneezing.

Allergies, and more, have been reported from other Bt cotton-growing states too. In Andhra Pradesh, studies by the respected NGO, Deccan Development Society, found that Bt cotton cultivators continued to use pesticides on a large scale, which belies the claim that Bt cotton would reduce pesticide use. The crops produced 'hitherto unseen diseases' in soils.

Adverse effects have been reported from the Philippines, the US and Germany from GM maize, cotton and soyabeans, including allergies in humans and permanent damage in pigs, cows and chickens. In the US, a GM food supplement called L-Tryptophan killed about 100 people and produced swelling, coughs, rashes, pneumonia, mouth ulcers, nausea, muscle spasms, difficulty in concentration and paralysis among 1,000 people.

This is only one set of problems with GM. There are others too. Studies suggest that gene insertion may disrupt the seed DNA, the protein inserted by the Bt gene may cause problems, and the foreign protein may be different than that intended. Besides, genes may get transferred to human systems.

GM crops are likely to increase environmental and food-chain toxins. These are unaffordable risks.

Given this evidence, GM foods certainly cannot be certified as safe. Yet, they are being promoted for profit by corporations which control intellectual property rights to GM seeds and can manipulate their sales.

Five giant corporations -- Monsanto, DuPont, Syngenta, Bayer and Dow -- comprise the bulk of the global GM seeds market. Monsanto alone accounts for 84 percent. Together, these companies own 35 percent of the worldwide seed market and 59 percent of the pesticide market.

The global commercial GM foods market comprises four crops -- soyabeans, corn, canola and cotton. But now GM companies are getting into fruits and vegetables like papaya, zucchini and spinach. GM potatoes and tomatoes were introduced but taken off the market. The companies work on only two traits: pesticides tolerance, or ability to withstand excessive pesticide use -- which they themselves make and sell -- and built-in pesticidal properties.

About 68 percent of the crops are engineered to resist a herbicide, about 19 percent produce their own pesticide, and 13 percent do both.

GM food crops are not the technology of the future. There are only 6 countries in which GM crop production is significant: The US (54 percent of world total), Argentina, Brazil, Canada, India and China. Most European countries don't allow GM food to be produced or sold. The US's dependence on GM is explained by the huge power that agrochemical corporations wield there. Argentina and Brazil raise GM crops mainly to feed animals for the global meat market.

India's experience with Bt cotton should be an eye-opener. Bt cotton was allowed to be grown without proper safety evaluation. This led to the wild use of GM seeds of all kinds -- 'authentic' (sourced from Mahyco-Monsanto), 'derived' (through improper genetic manipulation by small unregistered companies), and 'duplicate' or downright fake seeds made by fly-by-night companies. Farmers first took to Bt cotton because of higher yields and reduced expenditure on pesticides.

But these gains soon turned illusory. As their losses mounted, farmers withdrew from Bt cultivation. In response, the companies formed a cartel in 2006, and stopped selling non-Bt seeds, forcing farmers to buy Bt. This condemnably unethical practice should be immediately penalised. But the government has done nothing about it.

Losses from Bt cotton are one of the main causes for the 150,000 farmers's suicides in India since 1997 -- a number unprecedented in world history. The terrible human consequences of this abuse of science should jolt policymakers into asking why Indian farmers, who face falling returns to capital and acute water scarcity, should be encouraged to grow cotton which demands a huge 11,000 litres of water per kilo of the fibre. This is a suicidal bargain.

The future of Indian agriculture and food security doesn't lie in GM foods. They are unsafe, deliver no real benefits, and are bad for the environment and human health. Our real future lies in low-intensity, low-energy, low water-use agriculture based on and drought-resistant crops like millets (jowar, bajra, maize, ragi) and pulses, and sturdy indigenous seed varieties. That's where our research priorities must be directed.

Ultimately, do we want sustainable agriculture that's relevant to our climate, resources and food security? Or do we want corporate farming based on high-risk GM seeds and high chemical inputs? Opening the door to Bt brinjal is a step towards disaster.