The Indian government must find a way to deliver the basics to the poor. That is what will defeat the Maoists and hold off China, says T N NInan. 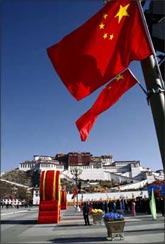 Tensions with China and the challenge posed by Maoists have had their share of headlines these past few weeks. They are seemingly unconnected issues, but they come into focus together when one looks at key statistics on economic growth and human development.

Take China first, for it has acquired massive strategic advantage in terms of global economic impact, diplomatic reach, military might and a hold on the world's imagination because it has performed spectacularly over three decades.

Its economy has grown 10-fold since 1978, while its foreign trade has multiplied 70-fold in the last decade alone; its exports are now more than India's GDP.

By way of comparison, India's GDP has multiplied about six-fold in the same period. It will take India a full decade to reach China's current level of per capita income. By then, China will have overtaken the United States as the world's largest economy (calculated on the basis of purchasing power parity).

When it comes to human development indicators, the gap is even greater.

China's human development index (calculated by the UNDP on the basis of three factors -- income, life expectancy and education) was 0.772 in 2007; India's was 0.612, which was the level China had reached in 1990!

At the present rate of progress on the index (1.3 per cent a year for India, about the same as China's), it will take two decades for India to get to where China is today.

As for economic development, China creates 10 times the power generation capacity that India does in a year. Whichever indicator you choose, China is one to two decades ahead of India, and on a rapid ascendancy curve. Naturally, it will flex its muscles.

All this is history, and explains power disparities between the two countries today. What of the future? Some answers come in the World Competitiveness Report, put out by the International Institute of Management Development (IMD).

Among 57 countries, China ranks 20th, India comes in 30th. What is revealing is why India ranks so low. Of four primary factors, the country does very well on economic performance (12th) and business efficiency (11th). But on government efficiency it ranks 35th, and on infrastructure 57th (i.e, last!).

Go into the details and the rankings become even more instructive: the last rank is on account of education, and health and environment, while on business legislation India comes in 42nd. In other words, the primary challenges are in areas where action is required most of all from the government.

This is where the Maoists come in, because, of course, it is not just a question of competitiveness. If the country is bottom of the class when it comes to the primary indicators of human development, naturally poor tribals and dalits will not be empowered and will not benefit from development.

From their perspective, change becomes detrimental because it leaves them behind; indeed, change is often exploitative. Bear in mind that, alone among South Asian countries, India's HDI rank (134th out of 182 countries) is worse than its income rank (128th).

In other words, while it is vital that the country continues with rapid economic growth, that is not enough.

If states like Gujarat grow 10 per cent annually while Jharkhand and Chattisgarh manage 4 per cent, problems will multiply, and Maoists will find more fertile ground to plant their violent seeds.

Nor is it enough to throw money at the problem if only 15 per cent reaches the target population.

The government simply has to find a way to deliver the basics. That is what will defeat the Maoists and hold off China.

Why Indo-China rivalry may spin out of control