Air India flies into another storm

About 1,600 employees of Air India earn more than Rs 25,00,000 per year, an aghast Civil Aviation Minister Praful Patel told Business Standard a few weeks ago while talking about the airline's turnaround plan. 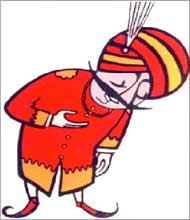 As if on cue, the Air India's new chief Arvind Jadhav began some tough talk with the airline's 14 unions - take paycuts or face layoffs. Jadhav, like Patel, also focussed on the airline's controversial 'productivity-linked incentive' scheme through which staffers often get around half their incomes.

If it was an incentive, how could it be fixed, and surely it would have to go when the airline was making losses? Jadhav unilaterally announced a 50 per cent cut in the PLI which would help save Rs 620 crore (Rs 6.2 billion) in one go.

The unions responded by rejecting the offer in a meeting with Jadhav and went on dharna (even after it came to an end, they threatened further action). But Jadhav cannot back down as the government's decision to infuse equity into the company is contingent upon his taking tough action.

And something that can help Jadhav reduce a fifth of his bloated wage bill of Rs 3,100 crore (Rs 31 billion) a year will clearly be seen as a tough measure, more so since it will bring down Air India's wage bill to around 16 per cent of its turnover from the current 20 per cent.

Rival low-cost carriers spend around 8-10 per cent of their sales as salaries - Air India's ultimate goal is to become an LCC. Indeed, a sharp cut in the wage bill is something Jadhav has committed to the government.

More important, it is the only thing he can do in the short run. Retrenchment is not something that happens in a hurry, so reducing the number of staffers per aircraft to levels comparable to his competitors will take Jadhav some time.

Cuts in basic salaries could lead to legal wrangles, so the PLI is the ideal low-hanging fruit, fraught with the least legal consequences.

The problem with Jadhav's approach, however, is two-fold. For one, it is not fair - rival Jet Airways, for instance, has senior executives taking higher cuts. In April this year, Jet's top management took a 25 per cent pay cut, those with salaries of Rs 500,000 and above took a 20 per cent hit.

When you look at the proportion of PLI in the salaries of various categories of staffers, the cut is regressive. For an assistant at the lower rung, the PLI is 22 per cent of the gross salary of just over Rs 19,000 a month. If you take the PLI away, what's left is just Rs 15,000 a month. In case of a new technician, the PLI constitutes 36 per cent of the salary; it is 55 per cent in the case of a superintendent and around 32 per cent for executive directors - so the senior employees see a lower proportionate salary cut.

Even more problematic is what this does for Air India's attractiveness as an employment option. Even with the much-reviled PLI, Air India's wages are not really out of line with those of competitors - in several cases, they are much lower.

So Patel's concern that too many people in Air India get fat salaries is probably not justified. And to pay operations employees - who fly or assist the process of flying -salaries which are out of sync with the market is asking for trouble. They may not leave immediately given the conditions in the industry, but once things improve, it is obvious what they will do.

Air India's pilots and engineers, who represent the high income bracket that has Patel so exercised, make about the same money that their counterparts in private airlines do. So an Air India senior pilot who flies the domestic circuit gets a total of around Rs 300,000-400,000 a month, depending upon the number of hours flown while a co-pilot makes about Rs 125,000 to Rs 200,000 - this is more or less in line with what private airlines pay.

Fresh engineers in a private airline make anything between Rs 30,000 to Rs 50,000 which is again in the same range as an Air India employee who gets around Rs 41,000.

A similar story gets repeated when you compare the salaries of technicians or the cabin crew. Cabin crew salaries for both Air India and the private airlines start at around Rs 25,000 to Rs 26,000 while, in the case of technicians, Air India employees are slightly better off  with a starting of around Rs 19,000 compared to even as low as Rs 10,000 in private carriers.

The difference gets turned the other way when it comes to the salaries of top management. The salary of a general manager in Air India is between 15 to 50 per cent lower than that in private airlines.

And for the top management posts like those of executive directors, Air India's salaries are as low as a third or a fourth of what their counterparts in the private sector take home.

More important, had it not been for the PLI, Air India salaries in the management cadre would have also been much lower than those in even Public Sector Units.

In an oil PSU, the total salary at the level of a executive director is around Rs 114,000 as compared to around Rs 121,000 in the case of Air India. But almost Rs 40,000 of the Air India pay is made up of PLI. Cut this away, and Air India's pay becomes worse than that of fellow PSUs.

Experts point that that the concept of PLI was brought into the airline primarily as a surrogate wage because, as it was a loss-making enterprise, the PSU could not implement various commission reports which recommended salary increases for the public sector undertakings.

The management consciously added in the PLI as a part of the airline's wage agreement since that was the only way it could attract talent.

Are there other areas where costs can be cut? Cutting Air India's turnaround time for each aircraft to levels similar to those of private sector LCCs, for instance, will save a lot of money.

Making Dubai or Sharjah or Bangkok as a hub for the airline would save over Rs 1,200 crore (Rs 12 billion) in ATF fuel costs every year. Jadhav, however, doesn't have the luxury of time. He has to make those savings now if he hopes to get the government's funding.

And without the funding - now that the government has ordered Rs 47,000 crore (RS 470 billion) worth of planes without giving him commensurate equity - he might as well close the airline. Either way, Air India's problems have only begun.