The job at hand for India 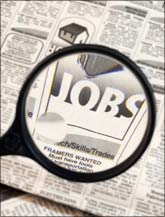 Thanks to the global economic crisis, it is commonplace to talk of job losses in India. But does anyone have a fix on just how many jobs have been lost?

Certainly the manner in which the National Rural Employment Guarantee Programme (NREGP) is expanding, it would appear that certain sections of the government believe that the problem is a lot more severe than they would like to admit publicly.

But if it is true that the rapid expansion and the high wages in the NREGP have resulted in several avenues of employment drying up (farmers growing certain crops, for instance, don't find it profitable to do this at current wage rates), then the NREGP may actually be working at cross purposes.

Sadly, however, there is no data worth the name that policymakers can rely upon, other than the once-in-five years National Sample Survey's (NSS) thick sample. For practical policy purposes, the NSS data is so out of date that it offers no real indications of the facts on the ground.

Since poverty levels in the country are directly related to job losses, and the job losses in turn are linked to agricultural performance as well as factors like the global trade cycle and the value of the rupee, it is vital that the government starts collecting data on employment on a quarterly basis, just as it does on other economic variables.

In the face of the current global crisis, the ministry of labour did conduct two quick quarterly surveys for October-December 2008 and January-March 2009, covering 21 centres across 10 states and union territories, and came to the conclusion that around half a million persons lost their jobs during the first period while around a quarter million jobs got created in the second period.

This is useful information, but it now needs to be formalised.

One option, of course, is to have an NSS-type thick sample survey conducted every quarter. That, however, may not be feasible given not just the extra burden it puts on the NSS, but also because the jobs situation is different in various parts of the country.

A better idea, perhaps, would be to design focus groups in different parts of the country and collect data and estimates from them.

The Confederation of Indian Industry, to use one example, regularly polls data from its members on various parameters; the Centre for Monitoring Indian Economy, to use another example, polls market players on behalf of commodity exchanges to get fair spot prices for various goods.

What the government needs to do is to identify groups of persons, associations and cooperatives who it can poll regularly to get a sense of what is happening in the labour market. Only when the data is available can any meaningful policy action be taken.

For starters, the number of people queuing up to join the NREGP is a good indicator of employment stress levels.