The real story about the drought

The poor monsoon is only a hiccup for the unfolding India growth story and will not dampen high growth rates, says Rajeev Malik. 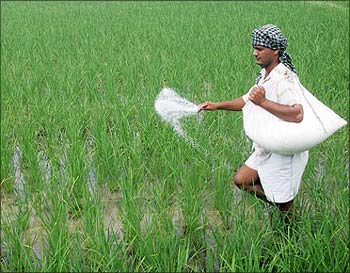 India's four-month-long monsoon is now in the last month of the season, and it has been a roller-coaster ride.

After a poor June, rains improved in July, the key sowing month, but posted a worrying shortfall in the first half of August before improving meaningfully thereafter.

Agriculture and allied output will likely decline around 2.5 per cent this fiscal year and GDP growth will moderate but still be 6.5 per cent or so, better than what most countries deliver in normal times.

It remains to be seen what the rabi harvest will look like, and that could carry both upside and downside risk to the forecast.

Still, the hit to GDP growth this year, and the typical post-drought above-trend rebound in agriculture in the following year (even under a normal monsoon) suggest a high probability of India's GDP growth hitting the 8 per cent mark next year -- sooner than previously thought.

The kharif crop will not be affected as much as the headline all-India shortfall in rainfall might indicate. At 23 per cent for Jun-Aug, the shortfall in overall rainfall during the current monsoon season has been worse than what it was in 2002, but the actual impact on agriculture (and hence GDP growth) would be much less than the 2002 disaster.

The key difference this time is the better rains in the crucial sowing month of July. Also, India's rural economy is now driven by more than just agriculture income.

The latter remains important, but its relative importance in affecting overall demand has lessened in recent years, owing to greater expansion of industry and service sectors into rural areas.

Finally, there are several policy-related factors that will mitigate the hit to consumer spending and to GDP growth, apart from the smaller hit to foodgrain production this time around, compared to the impact of the 2002 drought.

One, the fiscal-monetary policy mix continues to be pro-growth. The expansionary federal budget for FY10 announced in July will be complemented by the lagged favourable impact of the aggressive monetary easing by the RBI.

The unexpectedly expansionary budget announced in July was probably partly due to the negative newsflow on the monsoon that prompted the government to be pre-emptive in its fiscal response.

Three, India's non-agriculture growth will continue to improve this year and next despite the hit to the agriculture sector. Industrial upturn is already underway, and domestic demand will further improve as investment and consumption recover in the largely supply-constrained and capital-starved Indian economy.

The ongoing infrastructure push will also be instrumental in boosting domestic demand. Additionally, the improving external demand environment -- even if demand remains subpar -- will also begin to favourably affect industrial activity and exports.

Indeed, the industrial pickup and the anticipated improvement in several service sectors that were severely hit during the post-Lehman downturn will partially offset the weakness in rural demand owing to lower farm output.

The rise of the service economy has also resulted in increased linkages between earners in urban areas and rural spending owing to increased domestic remittance flow from towns/cities to villages.

Four, India's rural economy is much more than agriculture, and this has become more relevant as the share of agriculture (including allied sectors) in GDP declines; it has declined to 17.5 per cent from 34 per cent in 1980.

Both industry and services have become more relevant within the rural economy, and, along with the higher domestic remittance flow from urban to rural areas, have lessened the importance of the impact of changes in agriculture incomes on overall rural demand.

Monetary policy is ineffective in reining in higher food inflation, which is better managed via higher imports and increased food subsidy.

Also, unlike a sustained and structural increase in international crude oil prices, the effect of a drought is far more short-lived.

Finally, any immediate hiking of policy rates will only increase the downside risk to growth, while not doing much to solve the problem of higher food inflation. Premature monetary tightening will also complicate the huge borrowing requirement of the government.

While the food subsidy bill will likely be slightly higher, it will probably not cause the government's fiscal deficit forecast of 6.8 per cent of GDP to be exceeded.

Note that the federal budget is typically announced in February and hence an unanticipated hit from a drought throws off fiscal calculations. However, this year, the full budget was in July, with a poor monsoon partly already factored in.

Conflicting signals from WPI and CPI measures owing to differences in the weights assigned to food are not new but they do complicate monetary policy management. Recall that last year high food (and CPI) inflation did not prevent the RBI from aggressive monetary easing.

WPI inflation is likely to be above the RBI's target of 'around 5.0 per cent YoY' for end-March 2010 owing to higher-than-expected food inflation (the base-effect factor causing statistically 'higher' inflation is generally known).

That, along with convincing signs of a sustainable upturn in growth, will set the stage for a hike in policy rates by early next year.

RBI's talk will turn more hawkish to anchor inflation expectations but an actual rate hike is still an early next year event, as it is unlikely to jump the gun.

RBI will, however, gradually start unwinding the excessive liquidity injections, first via open market operations (OMOs) but that has been on the cards as the economy recovers, and poor rainfall does not affect that materially.

The bottom line is that the poor monsoon is essentially a hiccup for the unfolding India growth story, and does not dampen high probability of realisable sustainable annual growth of 7.5-8 per cent from next year onwards. Sceptics beware.