Should Google own the world's words?

Who owns literature? And would you be comfortable if the answer to that was: "Google"? 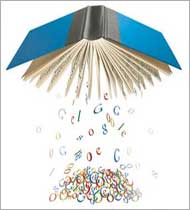 This is only a slight oversimplification, and it's the key question in the ferocious debate raging currently over Google Book Search. In late 2004, Google kicked off the Google Print Library project. The search engine behemoth announced plans to partner with some of the world's biggest libraries in order to digitise books.

Many of us saw this as a potentially good thing at the time, especially with regard to hard-to-find books, books that are out of copyright, or rare books that might not be easily accessible otherwise.

A vast, worldwide, easily accessible electronic library is everyone's Borgesian dream come true. But as early as 2005, fears surfaced that this might give Google too much power - and would the company be able to digitise books currently within copyright, or "orphan books" (books for which copyright is under dispute or hard to trace)?

By October 2008, Google had 20,000 partners in what was now known as the Google Book Search project - and had digitised over seven million books.

This sounds, again, like a good thing - the world's largest library, the rescue and recovery of forgotten or lost books, perhaps even a shift in the power equation between authors. Instead of being biased, inevitably, towards books published in our current time and age (bookshops will carry far more recently published works than classic works), we gain access to the work of the human imagination down the centuries.

Here's the catch. As the Google Books Search Settlement goes to court, one of the key issues at stake is whether Google will effectively own the world's largest library. As author Cory Doctorow explains, thanks to an ill-judged class action settlement between the Authors Guild and Google Book Search, "Google is the only company in the world that will have a clean, legal way of offering all these books [including orphan books] in search results... The real risk is that Google could end up as the sole source of ultimate power in book discovery, distribution and sales.

"As the only legal place where all books can be searched, Google gets enormous market power: the structure of their search algorithm can make bestsellers or banish books to obscurity. The leverage they attain over publishing and authors through this settlement is incalculable."

I like Google as a company. But do I trust them with this much power? Consider this, too: Google's tools are fairly (if quietly) invasive. The reason why authors like Michael Chabon and Cory Doctorow are protesting this settlement before the hearing on October 7, and why several publishers have joined hands with them, is that Google Book Search has a dark side to it.

Google's system can monitor not just what books you buy, but what you search for, what you read, down to how much time you spend on a particular page. This may seem paranoid, but to give one company this much power when their databases also include tools on the lines of Google Maps and Gmail is insane.

That's an awful lot of information that could be compiled in a way that is deeply invasive of your privacy. Imagine, for instance, that for excellent reasons, the courts might want the right to monitor the reading and online search habits of released paedophiles on probation. Google has that information.

Should it assist the courts, especially if the paedophile's probation officer suspects that he may be about to commit another crime? Now imagine a slightly different scenario, where you've fallen foul of, say, an IT official in India, and he decides to ask Google for your reading records, discovers a lot of searches for erotica, and had you prosecuted under anti-porn laws.

These are simplistic examples, but there is a chilling effect to giving one company this much access and control over your personal information. And there's a very human factor to be considered here: most people object to invasions of their privacy - but they object a lot less when that invasion is discreet and almost imperceptible.

If Google Book Search was to come into our homes every week and demand to see our reading lists, as well as instal security cameras to monitor exactly what we read, we would protest. But this is an online, invisible invasion. There aren't going to be that many protests.

Google argues that the project is intrinsically good, and points to their reasonably strong track record at respecting the privacy of individuals - except in China. But I'm not comfortable with the idea, as a reader, of giving one company that much control over my life - and no, Google's Privacy Policy isn't enough of a reason to trust them.

Add the invasion of privacy issues to the massively large database of literature that would now be in Google's hands, and you have a big problem. The world may still need and use a digitised library. But there are very good reasons not to hand over the keys to that library to one company. Even if it is Google.