News
Business
Movies
Sports
Cricket
Get Ahead
Money Tips
Shopping
Sign in  |  Create a Rediffmail account
Rediff.com  » Business » Of hunger and its eradication

Of hunger and its eradication 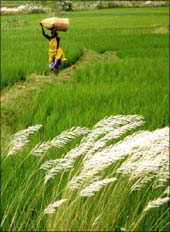 The media is celebrating Norman Borlaug as a great hunger-fighter, whose intervention with the 'Green Revolution' is supposed to have eradicated hunger in India. Obviously, the real starvation is of the mind, says Sadanand Menon.

So, more Indians go to bed hungry today than they did on the eve of Independence sixty two years ago. The per capita calorie intake, experts say, has dropped to what it was at the end of World War II.

On top of it now, over 25 per cent of the country (177 districts) has been declared drought-prone. Prices or cereals and pulses have skyrocketed to unprecedented highs.

And yet, when the obits of Norman E Borlaug were written after he passed away at 95 a few days ago, he was celebrated as a great 'hunger-fighter', whose intervention with the 'Green Revolution' is supposed to have eradicated hunger in India.

Is hunger merely a rumour, a myth invented by doomsday prophets? The manner in which the media celebrated the 'agricultural scientist' and his active role in eliminating indigenous agricultural patterns in large tracts of Indian farmlands, to be substituted with imported, technology driven, hybrid patterns, made one wonder.

Certainly, when hybrid farming was introduced in India in the mid-sixties through the combined offices of Dr Borlaug, the then Agriculture Minister C Subramaniam and agricultural scientist Dr M S Swaminathan, yields of wheat and rice did escalate dramatically by 1972.

The fast-growing varieties of grains, produced in research labs as distant as Manila and Mexico certainly created conditions of surplus under which the currently fashionable term of 'food security' could be easily floated.

However, during those decades, it turned out that while the Food Corporation of India's granaries were full, the hungry had no access to it due to poor distribution networks.

Planning Commission members like B P Minhas even suggested the storage bins were full because people lacked purchasing power. If all Indians could 'buy' their grains, the stocks would run out in no time.

Yet, the first flush of the sight of trains loaded with bumper crops muted whatever critique was forming of the Green Revolution. No one seemed to bother much that a substantial amount of the grain stockpile was either rotting or being eaten by rodents or simply being pilfered for the black market.

No one seemed to mind that this revolutionary route to 'food security' came as a package. The quick-growing hybrid seeds needed the boost of artificial fertilisers and heavy irrigation.

The strains developed in controlled laboratory conditions were not very resistant to local insects and pests. It was evident from the beginning that the entire process was a fix, loaded in favour of capitalisation of agriculture and the marketisation of its processes. The seeds needed to be purchased, along with sufficient quantities of fertilisers and pesticides.

It would fail under conditions where intense irrigation was unavailable. Large dams were an inevitability. The average farmer would be unable to muster up the start-up capital required and would have to pledge his lands to raise loans. Increased rollover cycles of sowing and reaping taking resort to chemical aids led to increasing soil infertility which, in turn, led to higher utilisation of artificial aids, necessitating the incurring of higher loans.

Within three decades, the pattern was to lead to a new kind of devastation -- extreme rural indebtedness on the one hand and high levels of soil salinity on the other. The unprecedented levels of rural migration to urban areas in the 1990s, was only one of the consequences.

The other was the rapid decline in the productivity of cereal farming and a wholesale turnaround to cash crops. Cotton, sugarcane, tobacco, bananas, coconuts, et cetera replaced rice, wheat and millets in many pockets.

This was to lead to further experiments in hybridisation of production and an invasion of Indian agriculture by multinational giants like Monsanto, who could exercise long-distance control over the entire process.

The Vishnu Mitter Institute of Paleo-Botany in Lucknow, for example, has studies showing that while there were over 127 varieties of rice alone being cultivated in the Indian subcontinent during the first two decades of the 20th century, these were steadily dropping and had reduced to 18 within the first two decades of the Green Revolution period.

Along with everything else, the idea of agricultural and food diversity too was receiving a knock. Mono-culture and the idea of single-point control systems, so important for designing market strategies, became the norm.

The not so well-advertised feature of the Green Revolution was the setting up of 'seed banks' at a few strategic locations around the globe. These multinational controlled banks siphoned off biological strains created across millennia through the 'scientific' labour of farmers who developed region-specific seeds which could withstand pest attacks and vagaries of weather.

Claude Alvares savaged this in The Illustrated Weekly of India in the late '80s, through some brilliant pieces titled 'The Great Gene Robbery'. Vandana Shiva and Amrita Rangaswamy too have not minced words describing the chicanery of what is passed off as agricultural technology that 'saved India'. And Utsa Patnaik predicts the great hunger ahead at our threshold.

Yet, the Indian media celebrates Norman Borlaug as a messiah. Obviously, the real starvation is of the mind.

Grain output may be down too