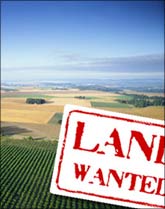 In both China and India the issue of land acquisition has become politically very sensitive.

In China by official reports more than 66 million farmers have been dislocated in recent years for various commercial development projects. Local officials in cahoots with local business have been rather cavalier in this matter, and this has inflamed passions in the countryside.

In India the scale of such dislocation has been so far much less, but already has led to a great deal of agitations and some violence.

There are, of course, disputes about the necessity of big commercial development projects in some areas and their damaging effects on community life and local environment.

In this article I shall set aside those real concerns and concentrate on the issue of adequate compensation and rehabilitation on some project which, say, a majority of local citizens have decided to support in the hope of improving local economic conditions.

I shall mainly focus on many lingering issues that have not received enough attention in the often rancorous and partisan debates. (I have written on this before: see a joint article with some other economists, 'Beyond Nandigram', Economic and Political Weekly, April 28, 2007; a solo piece in The Hindu, August 1, 2009; and a few pieces in the Ananda Bazar Patrika over the last couple of years).

In this article I'd go somewhat beyond and suggest that the central government's currently stalled Land Acquisition and Rehabilitation and Resettlement Bill should be completely overhauled.

West Bengal has become particularly polarised on this issue, but the problems are more general and relevant for other densely populated areas of India (where the poor are often concentrated), where rural education is too deficient for the farmers (or their children) to expect to benefit from the new jobs given their likely skill requirements, and where infertile land is often in areas where infrastructure is too undeveloped for attracting industry.

The West Bengal case shows that if the state acquires land, the compensation offered under the existing (or proposed) land acquisition law is on the basis of the value of agricultural land, whereas everyone knows that the land value will increase many times in which the current land-seller may not share.

On the other hand, if things are mainly left to the market, as some economists and part of the proposed legislation suggest, apart from the fact that numerous uncoordinated small sellers are no match for the bargaining power of large corporate buyers, the sellers will face the intimidation and strong-arm tactics of the land mafia which inevitably enters the fray. (The state can also behave in a high-handed way, but is more subject to political accountability processes.)

From the land-buyer's point of view the transaction costs of dealing with thousands of small sellers is large, and often prohibitive, even apart from the hold-up problem (by some tenacious minority of sellers) that is behind the "eminent domain" principle of land acquisition in many countries.

Under the circumstances, one needs a solution which will accomplish at least three objectives:

(a) Farmers -- and other stakeholders on the land -- need a compensation high enough to keep a large majority of them interested in voluntary sales;

(b) But if the state government offers sellers (and asks buyers for) a high compensation, corporate buyers can always threaten to go to another state, thus setting off a race-to-the-bottom for the competing state governments;

(c) The matter has to be settled in a way that it does not become a political football (such as has now vitiated West Bengal politics, and all sides have lost credibility).

The solution to (a) is for the state to offer sellers a compensation package in two parts: a minimum lumpsum amount related to the recent average market value of the agricultural land, and an annuity (a monthly pension as it were for the farmer's retirement) from an all-India trust fund where some shares of the new company are vested.

This fund will collect shares from all companies in the business of buying land all over India, so that risks are pooled on a large scale without the fund brought down by any particular project failure and it will be independently and professionally managed (like pension funds in many countries).

A stream of annuity payments is much better for poor farmers than one-off cash payments which often get frittered away.

Given that the productivity gap between the agricultural and non-agricultural use of land is very large in India (and increasing), a reasonable annuity may not drain much of the surplus from the new land use at least over the long run.

In projects where the land is acquired mainly for public infrastructure, a betterment levy on nearby land may be contributed to the trust fund.

Since stakeholders in the land also include sharecroppers and agricultural labourers, one may propose some part of the lumpsum compensation also to go to them, possibly related to the market value of the agricultural land (as the West Bengal government had originally announced for registered sharecroppers).

The state also needs to be involved in some form of temporary welfare payments (and job training) to unregistered sharecroppers and landless workers.

The solution to (b) obviously lies in some coordination in the annuity payment rate across all states from the all-India fund.

The solution to (c) is for the matter of land transfer, and administering of compensation and resettlement to be handed over to an independent quasi-judicial authority or a regulatory commission for each state, sufficiently insulated from the day-to-day political process but subject to periodic legislative review.

The commission should hold local hearings where all parties can present their cases and grievances.

The purpose of this article is not to suggest fool-proof solutions to real problems or to go into practical and legal details of implementation, but mainly to raise some matters of principle and to try to reorient the public discussion of land acquisition towards issues which are not being considered in the proposed legislation.

The writer is Professor of Economics, University of California at Berkeley.