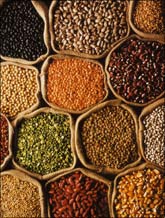 A lot has been written about the sharp rise in prices of pulses over the past few months. The government too has announced several measures to control prices.

While these short-term measures may succeed in controlling the prices to some extent, we need to take a long-term perspective on whether we are serious about developing a sustainable solution to this issue.

Pulses or daal are an integral part of the average Indian meal. A large proportion of the Indian population is vegetarian and pulses form the main source of protein: The protein content in pulses is about 18-25 per cent.

This makes pulses one of the cheapest sources of protein for human consumption. However, the per capita domestic production of pulses has declined from 60 grams per day in 1970-71 to 36 grams per day in 2007-08.

The World Health Organisation recommends the consumption of 80 grams per capita of pulses every day for India.

Based on expected population growth, India will require around 38 million tonnes of pulses by 2017-18 to avoid protein deficiency. Considering the current domestic production levels (15.1 million tonnes in 2007-08), this is a huge gap which needs to be addressed if we have to be self-sufficient in pulses.

If India has to meet the projected demand, it would have to either double its acreage at current yield levels or double the yield keeping acreage constant. Since either of the above may not be feasible in isolation, the country needs to look at a mix of both.

There are several reasons why pulses have not received the attention they deserve. Pulses in India are considered a residual crop and grown under rain-fed conditions in marginal/ less fertile lands with almost no focus on pest- and nutrient- management.

Heavy weed infestation, blue bull and pests destroy over 30 per cent  of standing crops before harvesting. In addition, there are post-harvest losses during storage due to attack by pulse beetle.

For this reason, pulses are considered a risky crop by farmers and yield levels are amongst the lowest in the world.

Tata Strategic Management Group recently undertook a study in the area of pulses and looked at some of the best practices prevalent in other countries; some important conclusions of the study are:

India has the potential to increase acreage by encouraging production of pulses in rice fallows. A substantial part of rice fallow land can be targeted for cultivation of pulses during the rabi season.

Intercropping and growing short-duration varieties between kharif and rabi season, by relay cropping, and intercropping, ensures further utilisation of existing agricultural land. Replacement of upland paddy with pulses is another viable option which has the potential to give better net returns to farmers.

India's yield can be brought to world-class levels by a mix of good agronomic practices and farmer education.

Usage of HYV seeds has the potential to increase yields by 25-35 per cent. Innoculation of seeds with Rhizobium bacteria helps in better nitrogen fixation and improves yields. Improving seed replacement ratio and ensuring timely availability of certified seeds will help increase production further .

Proper pest- and nutrient- management are very important levers to increase production of any crop. Appropriate nutrients, such as sulphur, zinc and phosphorus help in improving plant biomass for pulses and result in better yields.

Currently only 15 per  cent of the total area under pulses is irrigated as compared to an average of 46 per cent for all foodgrains.

Providing scheduled and controlled irrigation can lead to increase in yields.  Irrigation requirements for pulses are much lower than that for other crops and could be provided through sprinklers, etc.

Pulses need to be stored at optimum humidity conditions to prevent post-harvest losses due to attack of pulse beetles.

These insects mainly attack whole grains and not split pulses. By shortening the time taken from from harvesting to milling and storing pulses in split form, these losses can be reduced drastically.

By extending crop insurance to pulses effectively, farmers would stop perceiving pulses as a risky crop. Providing efficient sourcing mechanisms will provide the farmer with security on assured off-take, which could further encourage farmers to grow more pulses.

Considering the measures listed above, India has the potential to produce over 37 million tonnes of pulses. if India desires to achieve its true potential in production of pulses, we need a focused and integrated approach to address these barriers.