I am not joining the small minority which still argues that global warming is voodoo science; there is simply too much evidence of ice melting to argue from that standpoint. But I would suggest that there is hope on the global warming front, says T N Ninan. 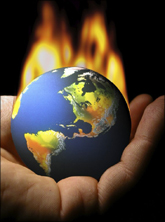 The world is all heated up about global warming, but did you know that there has been no warming of the globe over the past decade? And that, according to one recent forecast, there will be no warming over the next decade either?

Also, did you know that there was no change in India's mean temperature for three decades up to the mid-1970s? In other words, in roughly 50 out of 75 years, there was/will be no global warming!

No, I am not joining the small minority which still argues that global warming is voodoo science; there is simply too much evidence of ice melting to argue from that standpoint. But I would suggest that there is hope on the global warming front.

First, there is no automatic connection between the emission of greenhouse gases (which has been continuous and growing rapidly) and global warming (which has been stop-start-stop).

Second, some reports have been alarmist -- Jairam Ramesh, the environment minister, has asserted that the Himalayan glaciers are not melting rapidly, as many reports had said.

And third, some of the ultra-long-term forecasts about global warming (five or six degrees Celsius by the end of the century, as against a 'safe' increase of two degrees) have too many imponderables in them and are not much better than astrological forecasts.

But the real reason for hope is that, while December's Copenhagen talkathon on a post-Kyoto accord might get nowhere (for which, blame the hypocritical West), more and more countries are beginning to address the problem on their own.

The United States has new legislation that says it will reduce its emissions 87 per cent by 2050, with intermediate targets along the way. The European Union has a 20 per cent reduction target for 2020. China and India are getting their own plans put in place. If the plans work out, there may be no global warming left to talk about.

The sceptics will say that the rich countries have mostly failed to meet their modest Kyoto targets on emission reductions. Set in 1997, these postulated a 5 per cent reduction on the base year of 1990, to be achieved by 2012.

Most rich countries are nowhere near achieving these modest reductions, and indeed have increased their emissions. So why should the new goals (with a base year of 2005) be taken seriously?

The difference is that the environment has entered the lexicon of mainstream politics and is the stuff of everyday journalism. The resulting domestic agendas are more likely to be serious targets than those negotiated at a global conference.

In other words, if the actions of the major economies are driven by the sense of a common danger, what does it matter if Copenhagen fails? Climate change talks, after all, are not about right and wrong, or what needs doing and not doing; they are about politics and down-to-the-wire negotiations.

The game encourages unreasonable, indeed untenable, starting positions by those who think they are in control of the agenda. The western position, therefore, is that India must accept binding commitments on the emission of greenhouse gases, although it accounts for only 2 per cent of historical emissions, and has a current share of less than 5 per cent.

The United States, even after its 87 per cent cut after four decades, will have a per capita emission level twice India's or more. Besides which, India has already made its commitment.

Prime Minister Manmohan Singh promised more than a year ago that India's per capita emissions will not cross those of the rich countries. Copenhagen can fail, it is domestic agendas that need to succeed.