By A V Rajwade
September 30, 2009 17:44 IST
We need to be careful not to confuse financial market reform with following the US model of regulation, if finance is to remain a servant, not master, of the real economy, says A V Rajwade. 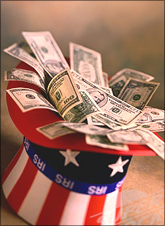 For the last 50 years, many people in the developing world, including in India, have had a love/hate relationship with the United States.

As one wag said, when slogans were shouted, during the Vietnam War for example, calling upon 'Uncle Sam to go back', at least some of the slogan shouters were silently saying 'but take me with you'.

Too many middle class parents' aspiration for their children was education in the US, leading to the coveted Green Card. And for good reasons: one of the world's richest countries; great universities and research establishments, at the cutting age of new technology; a democracy which welcomed immigrants providing practically unlimited potential to become wealthy. (The per capita income of ethnic Indians in the US is the highest of any ethnic group. No wonder of course: the best and brightest of the Indian education system go there).

The fact that English was the language of that country also helped. So did the glamour of Hollywood, and the fact that the average American is so open, generous, helpful and articulate.

This halo was all the brighter in relation to finance. US practices were considered to be the ideal, their accounting systems fool-proof and transparent, and the regulators effective and efficient. In short, any statement starting with 'In the US. . .' ended all argument, perhaps even thinking.

'Reform' came to be synonymous with adoption of US practices -- whether on the virtues of floating exchange rates, a liberal capital account, market efficiency, or any other issue.

The fascination with the US is such that the two most recent committees on banking sector reforms in India were headed by persons who have spent much of their working life in the US.

Surprisingly, this image was not damaged too much even after a series of accounting and other scandals -- Enron, WorldCom, insider trading, Mr Milken's junk bonds, the astounding dishonesty in the way the dotcom IPO bubble was blown by the investment banks in the late 1990s, etc.

Regulators? One only needs to be reminded of the more recent case of Bernard Madoff whose Ponzi scheme, ultimately totalling $65 bn, continued for a couple of decades despite the Securities and Exchange Commission investigating his activities on numerous occasions.

In our fascination with the US, we forget the umpteen weaknesses and contradictions of the economy: