There is nothing wrong in professionals becoming ministers. But once they do so, they should keep at an arms length their private interests, both of their own and their near and dear ones, says Business Standard. 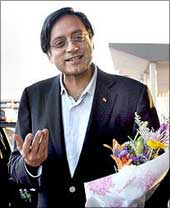 With all his years of experience as the public relations man for United Nations officials, Union Minister Shashi Tharoor knows how to stay in the news. This time, however, it is someone else's tweet that's got him into trouble.

While Mr Tharoor's popularity may be rising among Kerala's youth, and understandably so given that the state has had a paucity of charismatic and good-looking leaders for a long time, the latest Tharoor tweet once again draws attention to a larger problem facing the United Progressive Alliance government. This relates to the problem of ministerial conflict of interest.

There is, of course, the more narrowly defined concept of 'conflict of interest' in politics, wherein a public official may be handling, as part of his official duties, a portfolio or a matter wherein she has a direct and personal interest.

There is also a larger or wider concept of 'conflict of interest' wherein a public official may have other non-official interests that influence or impact upon her official position.

When a minister has business or other extra-curricular interests that place a demand on his working hours, that too is a kind of conflict of interest.

Thus, the cricketing interests of the Union Minister for Food and Agriculture, Sharad Pawar, have come in for adverse comment because the minister has had to devote far too much time to cricket, at the cost of discharging his ministerial responsibilities.

There are dozens of examples of ministers in state governments and at the Centre who retain their business interests, indeed acquire new ones in power, and combine public office with pursuit of private interest. This is unacceptable.

There is nothing wrong in business persons and professionals entering public life and becoming ministers. But once they do so, they should keep at an arms length their private interests, both of their own and their near and dear ones.