Ulip war: Why Sebi order may not be right 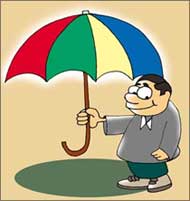 While the last hasn't been heard on the matter, Sebi's stance seems prima facie inconsistent with the law, says Vaibhav Kakkar.

The cornerstone of any efficient financial market is certainty and coherence in its regulatory framework.

Unfortunately for India, the turf war between the Securities and Exchange Board of India (Sebi) and the Insurance Regulatory and Development Authority (Irda) in relation to unit-linked insurance plans (Ulips) has dispelled the belief that the regulatory system governing India's financial markets is becoming increasingly sophisticated.

A brief review of the Sebi order (prohibiting life insurance companies from raising finances from investors under existing or new policies or marketing any new products, up to such time as they register with Sebi) is a case in point as this order has no basis in the present legal framework.

The legislature enacts primary legislation to establish regulators and delegates powers to them to formulate secondary legislation. Sebi was set up under the Sebi Act and its powers are derived from that Act itself.

Any regulation notified by it that is beyond the scope of these powers would be without any legal basis. The Sebi Act (as well as several committee reports of Sebi) clearly recognises the fact that, conceptually, a mutual fund is in the nature of a Collective Investment Scheme (CIS), which Sebi is authorised to regulate.

Section 11AA of the Sebi Act expressly states that a contract of insurance which comes under the Insurance Act shall not be deemed to be a CIS.

Interestingly, the Insurance Act defines the life insurance business to include any contract where the payment of money is assured on death or on the happening of any contingency dependent upon human life and further includes annuities granted on human life.

As is evident from the broad scope of such definition, the subject matter of an insurance contract could very well be investment, while the contingency on which the sum assured is payable could be the survival of the insured up to a certain age, and not merely the death of the insured.

However, given that the intent of the legislature appears to have been to provide as broad a definition of the "life insurance business" as possible, Sebi's argument appears to be built on a shaky foundation.

The position on Ulips under English law (which has been recognised by Indian courts as forming the jurisprudential basis of Indian insurance law) is no different.

A century ago, English courts held that merely because an insurance product also contains an investment component and the contingency upon which money is payable in such products is not only death, but linked to other events contingent upon the duration of human life (i.e. survival of the insured up to a prescribed age), it does not imply that such products would not be regarded as purely contracts of life insurance.

In addition to the exclusion of a contract of insurance, a review of all other exemptions from the provisions dealing with CIS under Section 11AA of the Sebi Act reveals that all exempted arrangements are such that they are the subject matter of separate regulatory framework -- the rationale clearly being to avoid a multiplicity of regulatory authorities on the same subject matter.

For instance, the exempted categories include pubic deposits raised by companies and non-banking financial companies (NBFCs) which are already regulated by the Reserve Bank of India (RBI) and the Ministry of Corporate Affairs.

The benefits under a Ulip in case of death of a policyholder are typically the higher of the sum assured or the fund value represented by the number of outstanding units as on the date of death; in a mutual fund, in all circumstances, the benefit is linked and limited only to the fund value of the units held by the unit holder and never to the death of the unit holder.

Thus, unlike mutual funds, unit-linked products are inextricably interlinked with the life of the policyholder and the sum assured. Also, if one were to trace the historical development of Ulips, one would conclude that Ulips are only an advanced form of an endowment policy (with profits), with the only difference being that in this case, the investment made by the insurer in various financial instruments is represented in the form of units lying in the account of the policyholder for the purpose of determining the benefits payable under the policy.

Tracing this historical development is important in order to understand that endowment insurance policies have been in vogue from much before the amendments that empowered Sebi to regulate CIS were made to the Sebi Act.

Another reason why the Sebi order is flawed is that as per the Insurance Act, the sole purpose and activity of a life insurer can be to undertake the life insurance business.

If the Sebi's directive is accepted and life insurers are required to register themselves with Sebi for the Ulips for conducting mutual fund business, Sebi would, in effect, be mandating life insurers to conduct a business other than the insurance business.

Obviously, a regulatory body cannot overturn, by a simple ruling, the mandate prescribed by the legislature for life insurance companies and the Sebi's directive, therefore, cannot be accepted as correct.

On the other hand, if Ulips are held to be insurance business, then quite naturally, Sebi does not have jurisdiction under the Sebi Act to regulate such products. In other words, under the present laws, compliance by life insurers with Sebi and Irda directions on Ulips can only be mutually exclusive events.

Also at a policy level, the need to have an additional regulatory authority supervising Ulips is unclear. While there are genuine concerns regarding the high commission structure of Ulips because of which they are aggressively and misleadingly sold, this surely cannot form the policy basis for another regulatory authority to exercise its jurisdiction, especially given that Irda has in recent times taken several steps to ensure that Ulips are sold in a transparent manner and that the commission costs are reduced.

If today we were to accept Sebi's directive, would we also be encouraging Sebi to subsequently argue that it would be within its right to regulate the newly launched pension products, which the government had intended to be within the exclusive domain of the Pension Fund Regulatory Development Authority? Would it mean an end to India's avowed policy to have separate regulatory authorities for each specific sector?

This issue has become more complex and twisted since Irda subsequently issued a mandatory direction to all life insurers under the Insurance Act, stating that the Sebi order will seriously jeopardise the interests of the policyholders and the insurers and that notwithstanding the Sebi order, the life insurers should continue to carry out the Ulip business.

Could this embarrassment of a public spat between two national regulatory authorities have been avoided by a more effective consultation process between them, especially given that both of these authorities regularly meet as part of the High Level Coordination Committee on Financial and Capital Markets?

Although the government has finally intervened to restore the status quo until the matter is resolved by courts, this issue is far from over.