News
Business
Movies
Sports
Cricket
Get Ahead
Money Tips
Shopping
Sign in  |  Create a Rediffmail account
Rediff.com  » Business » How lessons in micro-finance can help the poor

How lessons in micro-finance can help the poor 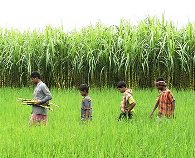 A rural women's university is pioneering an effort to teach microfinance through practical lessons in the villages of Sonepat, says Sreelatha Menon.

Young students of a rural women's university in Sonepat, Haryana, in the midst of their courses in MBA, social work and sociology, make short trips to neighbouring villages they have adopted.

There, they meet women's groups they have formed. Soon they would be giving them lessons in microfinance, even as they are still learning it themselves.

What Mohammad Yunus discovered as a professor of Economics in his days of experimentation with what a few takas could achieve when given to poor villagers, these students are to learn through practical lessons as part of a curriculum. This is being prepared in association with Sa-dhan, an NGO and a microfinance advocacy organisation.

Microfinance is to be made a part of the curriculum in their MBA with social work and sociology programmes. Manju Panwar, assistant professor in the university, is busy framing a strategy to achieve this.  "We are talking to Nabard and the Rashtriya Mahila Kosh for financial assistance to run our microfinance," she says.

Sonepat is not the only case. Several other universities are coming forward to teach microfinance, possibly through practical lessons to their students of economics and sociology - a trend that could not have been thought of two decades ago, when microfinance had not got recognition as a tool for empowering the poor through access to small credit.

The Allahabad University and a few universities in Orissa, Hyderabad and Guwahati, besides the Institute of Forest Management, Bhopal have already recognised the importance of microfinance and put it in the curriculum. Sa-dhan had held workshops in these universities, advocating the advantages of teaching microfinance to students.

Sa-dhan Chief Mathew Titus says his organisation has been creating awareness in universities through workshops on the potential of microfinance to create jobs for students, while also being a tool for poverty alleviation.

This is up from 18 million in 2008. A big leap was achieved recently in microfinance education when the prestigious Indian Institute of Banking and Finance (IIBF) started a distance learning programme in microfinance, in association with Sa-dhan.

The latter provides the course material and the institute, which charges a mere Rs 4,000 for a diploma, has so far conducted three examinations. The first set of examinations starts six months after the course, says IIBF CEO R Bhaskaran. So far, 500 people have taken the IIBF course in English and Hindi. But, from this year, it is expecting things to change.

It is relaunching the course in 10 Indian languages, thus telling it in the language of the people who will use it. Bhaskaran hopes this would swell the number of people who can benefit from the course.

Course material would be available in Marathi, Gujarati, Bangla, Oriya and the four South Indian languages, besides Hindi and English.

Education in microfinance, according to Brij Mohan, chairman of MIF Access, is not far away from becoming part of the mainstream higher education. But, it is something that will have practitioners writing the lessons and also training the teachers on the subject.

The Management Development Institute in Gurgaon had recently joined hands with MFI Access to start a competition in case studies in microfinance. This was in honour of the late Sitaram Rao, an Indian microfinance guru who invigorated the sector with his dynamic ideas and practices as part of MFI SKS.

More of microfinance has yet to come into the education system, or, as Brij Mohan puts it, "new education" - referring to all the fields like microfinance that have emerged as trademarks of this century.

This MBA grad left her job to paint