News
Business
Movies
Sports
Cricket
Get Ahead
Money Tips
Shopping
Sign in  |  Create a Rediffmail account
Rediff.com  » Business » The hidden future of the US economy

The hidden future of the US economy

While forecast of a double dip would be rash, most analysts are raising the odds for such an event, writes Martin Feldstein.

Just how bad is the outlook for the United States' economy? Unfortunately, you cannot tell from the forecasts. These days, it is common to read forecasts predicting that the US economy will grow at a 3 per cent annual rate in the coming year. But just what does that mean? 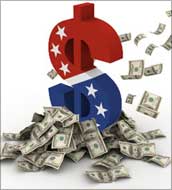 The forecaster is not saying that she is confident that growth will be exactly 3 per cent. Every forecaster recognises that the actual growth rate may be higher or lower than the number that she states. There is a distribution of possible growth rates, and the forecaster is telling us just one of the outcomes that she can contemplate.

But if a forecaster tells us that she "expects" a growth rate of 3 per cent, does that mean that she thinks that it is as likely to be above 3 per cent as it is to be below 3 per cent - the "median", as she sees it, of the distribution of possible growth rates?

Or could it mean that she thinks the most likely growth rate will be close to 3 per cent (the "modal" value), even though she may believe that it is much more likely to be less than that value than to be greater?

Many forecasters currently believe that there is a significant probability that the economy will slump during the next 12 months - a "double dip" in the expansion process. It is possible for them to hold that view and still forecast 2 per cent growth for the next 12 months as the most likely outcome or the "median" of their probability distribution.

Any decision maker who depends on forecasts - a businessman, an investor, or a government official - needs to know the probability of very low or very high growth rates, as well as the median forecast. But that information remains hidden.

Some surveys of forecasts report the distribution of the forecasts of different individuals being surveyed. We might read that the average forecast of 20 different forecasters is 2.8 per cent, with the five highest forecasts above 3.2 per cent and the five lowest forecasts below 2.5 per cent.

While that is useful information, it does not say anything about the extent to which each forecaster believes that growth might turn out to be less than 1 per cent, or even less than zero.

Recent US data have clearly raised the probability that the economy will run out of steam and decline during the next 12 months. The key reason for increased pessimism is that the government stimulus programmes that raised spending since the summer of 2009 are now coming to an end. As they have wound down, spending has declined.

The government programmes failed to provide the "pump-priming" role that was intended. They provided an early spark, but it looks like the spark did not catch. For example, a tax subsidy for car purchases caused GDP to rise in the third quarter of 2009, with more than two-thirds of the increase attributable to motor-vehicle production.

But now that the subsidies have ended, the level of both sales and production has declined. A recent survey of consumers reported the lowest level of intended car buying in more than 40 years.

Although annual GDP growth was 3 per cent in the first quarter of this year, almost all of it reflected inventory accumulation - some of which, no doubt, was unwanted build-up caused by disappointing sales.

When inventory accumulation is excluded, first-quarter growth of "final sales" was just 0.8 per cent in annual terms - and 0.2 per cent compared to the fourth quarter of 2009.

The second quarter benefited from a surge in home purchases, as individuals rushed to take advantage of the tax subsidy for home buyers that expired in April. But what will happen in the third quarter and beyond now that that program has ended?

While it would be rash to forecast a double dip as the most likely outcome for the economy during the rest of this year, many of us are raising the odds that we attribute to such a downturn. Unfortunately, those forecasts of what might happen remain hidden.

The author is professor of economics at Harvard, was chairman of President Ronald Reagan's Council of Economic Advisors, and is former president of the National Bureau for Economic Research