News
Business
Movies
Sports
Cricket
Get Ahead
Money Tips
Shopping
Sign in  |  Create a Rediffmail account
Rediff.com  » Business » You can't have it both ways, Mr FM

You can't have it both ways, Mr FM

If he expects the states to take steps for controlling inflation, he should also respect the country's federal structure and not assume a veto power at the GST Council, writes A K Bhattacharya.

Has Pranab Mukherjee become the most powerful finance minister independent India has seen in the last 63 years? He already heads the largest number of ministerial groups (better known as GoMs) set up to tackle various policy issues facing the United Progressive Alliance government. 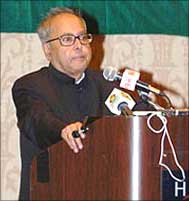 If there are still some doubts about his rising importance and power, these must have dissolved after the manner in which certain developments took place in the last few months.

Consider the following three developments. While presenting the Budget for 2010-11 last February, Mr Mukherjee dropped a bombshell, at least for the financial sector regulators. He said that with a view to strengthening and institutionalising the mechanism for maintaining financial stability, the government has decided to set up an apex-level financial stability and development council.

Of course, there was the standard assurance that the proposed council would not jeopardise the autonomy of regulators. But the bottom line became clear with the announcement that the council would be headed by none other than the finance minister himself and it would also address inter-regulatory coordination issues, monitor macro prudential supervision of the economy, including the functioning of large financial conglomerates, and focus on financial literacy as well as financial inclusion. The message was clear: Here comes a finance minister with more power!

Then in June, the finance ministry mooted an ordinance to create a joint mechanism to settle inter-regulatory disputes. The idea of the ordinance arose out of a public spat between the Securities and Exchange Board of India and the Insurance Regulatory and Development Authority over who should regulate unit-linked insurance schemes.

You may blame the two regulators for not resolving the dispute through mutual discussion or legal means, but this certainly encouraged North Block to step in as the arbiter.

The finance ministry did just that and the manner in which it issued the ordinance provoked a volley of protests from financial sector regulators, particularly the Reserve Bank of India. The reason was obvious.

The ordinance mandated that the finance minister would head the joint mechanism to settle inter-regulatory disputes. The message, once again, was clear. Mr Mukherjee would like to be the boss in respect of all regulatory disputes in the financial sector.

Last month, the finance minister showed remarkable political sagacity and fiscal prudence by managing a reasonable consensus among most states on the broad structure of a single-rate goods and services tax (GST) which would replace all forms of indirect taxes barring customs and octroi over a period of three years starting from April 2011.

Many states, including even a few of those ruled by the Congress, did not like a forum where the Union finance minister's veto power would virtually take away their fiscal autonomy. The conclusion was obvious. Mr Mukherjee wanted a power by which he could overrule every state finance minister at the Council.

In all the three instances, Mr Mukherjee has been accused of being either a super regulator or a super finance minister.

Mr Mukherjee has denied these charges, but there is no denying that he has made a conscious attempt at enhancing his powers and administrative jurisdiction by proposing to vest in him the veto power on GST matters and by appointing himself as the chairperson of both the joint mechanism and the financial stability and development council.

He has also tried to respond to objections from the regulators and state finance ministers by making some concessions. He has made the RBI governor the vice-chairman of the joint mechanism to settle inter-regulatory disputes. Similarly, he has agreed to review his veto power at the GST Council.

So far, he has shown no signs of reconsidering his stance on becoming the chairman of the financial stability and development council, even though the central bank has opposed the idea. If earlier developments are any indication, he might make some concessions on this issue as well, but without losing his overall control of the new Council.

The question finally boils down to governance and how much power should vest in one person or office.

Is the finance minister better off if he allows regulatory functions to be performed by professional regulators? Shouldn't disputes among regulators be allowed to be settled by existing coordination bodies already in place? By himself chairing such bodies, is the finance minister losing an opportunity of taking the much-needed overall view of policy and the direction it needs to take?

Another concern arises when the Union finance minister wishes to be a super finance minister with a veto power at the GST Council. Mr Mukherjee has argued in Parliament that apart from the Centre, the states too should take the responsibility of controlling inflation.

He cannot have it both ways. If he expects the states to take steps for controlling inflation, he should also respect the country's federal structure and not assume a veto power at the GST Council.