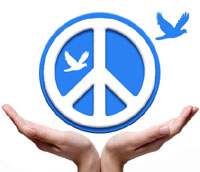 Violence is generally considered to have more voice. By contrast peace tends to be associated with passive quietude.

So when a Mumbai-based volunteer group launches an initiative called 'Peace Talks' it may seem tinged with irony. Instead this group, Citizens for Peace (CfP), is reaffirming confidence in the power of dialogue. That means listening to and talking with, rather than shouting-at, whoever you might disagree with or be in conflict with.

The Peace Talks initiative was inaugurated last week -- precisely when faith in peace through dialogue seemed to be imperilled by worsening turmoil in the Kashmir valley.

Interestingly, the inaugural speaker was Sushoba Barve, director of the Delhi-based Centre for Dialogue and Reconciliation, who has extensive experience of working in conflict zones.

Yes, the problems of the Kashmir valley are complex, said Barve. But at present tensions are being compounded by the feeling of young Kashmiris that civil society in the rest of India does not care what happens to them. They have a feeling that no one is listening or willing to engage to understand their angst.

Of course, there will be sharp political disagreements about how to resolve the roots-causes of conflict in Kashmir, said Barve. But these need not prevent ordinary people across India from expressing empathy with the people of Kashmir at a purely human level. This very act of reaching out is far more powerful than we imagine.

Barve's confidence in this approach is based on her intensive experiences as a peace-worker -- for instance, in Mumbai after Hindu-Muslim riots in 1993. When Hindus and Muslims were first invited for a dialogue in Dharavi the gathering seemed explosive at the beginning.

People first lashed out at each other in anger. But once the hurt had been expressed and heard with some degree of empathy, spaces for dialogue opened up. This was the process that led to the birth of Mohalla Committees, in which Hindus, Muslims and the police department collaborated to create ways of monitoring and diffusing tensions between the two communities. Mohalla Committees are still active in Mumbai.

Centre for Dialogue and Reconciliation (CDR) is a non-governmental platform which, over the last ten years, has been facilitating dialogues between various 'sides' of the conflict in J&K. When people of a region or a community are angry and frustrated, said Barve, the first thing they need is to be heard.

So the pre-condition for peace is to create spaces where anger, grief and tensions can be expressed in a safe and non-confrontational manner. But this in turn means that participants agree on the difference between a debate, where participants attempt to score points, and a dialogue, where participants seek to understand other viewpoints.

A series of such dialogs convened by CDR has shown that all sides of the Kashmir conflict agree on one thing: violence is not a viable tool for resolving their disputes.

While violence in the Kashmir Valley makes headlines most people are unaware that CDR has been able to hold a series of Intra-Kashmir dialogs, with special emphasis on involving people engaged in business and trade.

In October 2009, CDR hosted a dialogue among influential persons from all parts of J&K, including the presidents of the Chambers of Commerce and Industry of Jammnu, Kashmir and 'Azad J&Kashmir', which is also known as 'Pakistan-occupied J&K'.

As one participant from Ladakh said: "Economically satisfied people are not driven to violence. Trade and commerce do not know religion but are binding people around the world. Two parts of J&K are natural trading partners just as India and Pakistan are."

This view has also been echoed by Dr. Amitabh Mattoo, vice chancellor of the Jammu University: " if you treat J&K as a real estate problem, it is a zero-sum game: if you adopt a legalistic approach, there is little hope. But if you focus on the welfare and development of the people of J&K it is a win-win situation."

CDR's dialogues have led to the creation of a 'Working Group on Cross LoC Trade' which is trying to remove hurdles to smooth trade: hassle free clearance of goods, multiple entry passes for traders who need to frequently cross the LoC, enhancement of the Trade Faciliation Centre set up at the LoC and more.

Naturally, such initiatives from citizens are a necessary but insufficient condition for peace. For there to be peace in Jammu and Kashmir, Ms Barve said, there must be among other things:

·       An end to human rights violations and calibrated reduction of security forces from civilian areas.

·       Police force to be trained in more humane methods of crowd control.

·       Better governance and accountability from all branches of government.

·       A resumption of the dialogue with Pakistan.

·       A sincere and persistent effort to settle the political issue of Kashmir.

Kashmiris must be involved in the decision-making process rather than a solution being thrust on them.

CfP's PeaceTalks initiative is a platform for highlighting such strivings and other forms of creative action aimed at resolving conflicts.

The initiative seeks to explore innovative, sustainable solutions to the violence around us by promoting conversations with a wide range of people. Conducted over the next year, which support from Mahindra and Mahindra, twelve Peace Talks sessions will provide a space for intelligent and calm reflection with activists, professionals, academics and businesspeople engaged in the quest for both peace and justice.

Disseminating the talks over the Internet and other social media, CfP hopes to foster greater confidence in the ability of ordinary citizens to be agents of peace.

For instance, as Barve said to those gathered at last week's Peace Talks -- the angry and stone-pelting youth of Kashmir are communicating with each other on Facebook. That brings them within hearing range of anyone who wants to reach out with a simple offer: a willingness to listen with empathy.

Rajni Bakshi is a trustee of Citizens for Peace. She is also the author of the book Bazaars, Conversations and Freedom: For a Market Culture Beyond Greed and Fear.